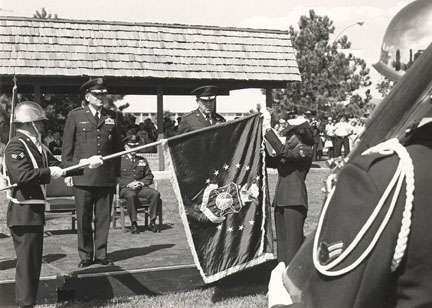 PETERSON AIR FORCE BASE, Colo. September marks the 20th anniversary of the command.

Compared to rest of the Air Force, space is new to the battleground, but it has proved no less essential than any aircraft, ship or battalion. The history of the command is no less vibrant. And it all began just more than two decades ago.

The Formation of Space Command

Studies and proposals during the late 1970s acknowledged the need for a change in the Air ForceĒs organizational structure for space operations. In February 1979, the most important of these, the "Space Missions Organizational Planning Study," explored future options and offered five alternatives ranging from continuation of the status quo to creation of an Air Force command for space.

On April 17, 1982, Gen. James V. Hartinger, commander in chief of North American Aerospace Defense Command and Air Defense Command, presented a plan showing how the Air Force might immediately create a major command for management of space resources on a par with the Strategic Air Command, Tactical Air Command, and Military Airlift Command. On June 21, with approval from Gen. Lew Allen, the Air Force Chief of Staff, the Air Force officially announced its decision to form Space Command effective Sept. 1 of that year.

During activation ceremonies for Space Command, Hartinger, as its first commander, labeled its establishment as "a crucial milestone in the evolution of military space operations," and predicted the new command would "provide the operational pull to go with the technology push which has been the dominant factor in the space world since its inception."

The command grew quickly in the following year. During 1983, SAC passed to Space Command operational responsibility for a worldwide network of more than 25 space surveillance and missile warning sensors, as well as Peterson, the home of the new command.

In the early 1980s, the Air Force had added a number of systems, such as Ground-based Electro-Optical Deep Space Surveillance System, called GEODSS, to the Space Detection and Tracking System network with the intention of enhancing the capabilities of the system. The operational mission of the new command revolved around these systems as well as others transferred from SAC such as the Defense Support Program, the Ballistic Missile Early Warning System and PAVE Phased-Array Warning System (popularly known as PAVE PAWS) radars. DSP, along with the Defense Meteorological Satellite Program, were the first satellite constellations operated by the command.

From their earliest days, Air Force Systems Command, or its predecessor Air Research and Development Command, controlled most Air Force launch systems and satellites. With a primary emphasis on research and development, Systems Command was not sufficiently operations-oriented to meet the needs of space systems users -- the warfighters.

After its formation, AFPSC immediately began to work toward the eventual assumption of the satellite telemetry, tracking, and commanding mission with the opening of the Consolidated Space Operations Center at Falcon Air Force Station, Colo., in September 1985. The process continued in October 1987, when the command assumed responsibility for the Air Force Satellite Control Network from Systems Command, including its numerous worldwide remote tracking stations. Subsequently, the Consolidated Space Operations Center operations facilities gradually took over command and control responsibilities for most Air Force satellites including the NAVSTAR Global Positioning System, the Defense Satellite Communication System, DMSP, the DSP and Milstar.

It was not until the 1991 Persian Gulf War that these systems had a major impact on the conduct of military operations. U.S. ground forces used GPS satellite data to easily navigate the nearly featureless desert landscape ± even at night. DMSP weather satellites provided vital data on sandstorms, surface winds and other conditions that affected our troops and air operations.

DSP early warning satellites provided the essential first warning of Iraqi Scud missile attacks on coalition bases and Saudi and Israeli cities. Although delivered via an ad hoc reporting arrangement, this vital "heads up" assisted U.S. Patriot missile batteries in engaging many incoming Scuds. The Gulf War then was the first major conflict in which the American military heavily relied on support from space systems.

The demonstrated usefulness of space systems during this conflict and their obvious undeveloped potential for further use would lead to a major rethinking over the next several years of the role of space systems in warfighting.

Continued Growth in the 1990s

Two significant additions to the command during the 1990s brought the command to its current operational state.

Second, the Minuteman and Peacekeeper ICBMs, the only remaining purely strategic Air Force systems, transferred to AFSPC on July 1, 1993, thus aligning these vital assets with the rest of the Air Force space mission. As part of this action, AFSPC took over 20th Air Force, six missile wings, and one test and training wing. Finally, to create a similar organizational framework for the commandĒs space assets, all missile warning, space surveillance, and satellite control units were organized under 14th Air Force.

Because the new command matured rapidly during the 1980s and ļ90s, as did the importance of space to the Air Force, Air Force chief of staff, Gen. Merrill McPeak, officially changed the Air Force Mission Statement, on July 19, 1992, to read:

"Defend the United States through control and exploitation of air and space."

In 1992 the Air ForceĒs Blue Ribbon Panel on Space recommended the creation of an organization to examine the capabilities of space-based systems and their application to warfighting. Dedicated in December 1993, the AFSPCĒs Space Warfare Center, located at Falcon (later Schriever) AFB, formed to develop and test concepts, applications and procedures to enable the warfighter to more fully utilize the unique capabilities of space-based systems and products.

One of the first fruits of the SWC's efforts was the Attack and Launch Early Reporting to Theater, or ALERT, system, designed to provide theater missile warning using DSP satellite detection capability and created a permanent reporting structure. ALERT reached initial operational capability in March 1995. The SWC quickly grew to include a number of test organizations and a Space Battle Lab. Opened in June 1997, the Space Battle Lab developed innovative operational and logistical concepts employing space systems and capabilities and tested them in a laboratory or operational venues.

As the threat of nuclear war with the republics of the former Soviet Union diminished as a result of treaty reductions of weapons and a change in focus among those nations, AFSPC began to pare down the missile warning network to reflect the changing strategic situation.

With much of the former Soviet submarine fleet rusting in port, the threat of a submarine-launched ballistic missile attack against the United States was greatly reduced. Accordingly, AFSPC deactivated the PAVE PAWS radar sites at Eldorado AFS, Texas, and Robins AFB, Ga., in July 1995, which in turn facilitated the much-needed system upgrade to the BMEWS site at Clear AFS, Alaska. Arms control agreements led to reductions in the nationĒs nuclear arsenal and the inactivation of three of AFSPCĒs missile organizations, the 44th and 351st Missile Wings and the 321st Missile Group.

Another byproduct of the reduction of Cold War tensions was a major wave of cost-reduction measures in the early 1990s aimed at reducing staff and eliminating redundancy. As part of this effort, in 1994 the White House directed the merging of the Air Force and National Oceanographic and Atmospheric Administration's weather satellite programs, and, in 1998, AFSPC transferred control of DMSP to NOAA.

As AFSPC moved into the 21st Century, the outlook for space operations and systems continued to improve. New initiatives and systems, such as the Space-Based Infrared System DSP follow-on, would soon change the way the command did business.

Also on Jan. 11, 2001, the Space Commission, chartered by Congress, issued a report recommending significant organizational realignment and increased space responsibilities for the Air Force. On May 8, Secretary of Defense Donald Rumsfeld announced a major national security space management and organizational initiative and designated the Air Force as the Department of Defense executive agent for space.

Subsequently, on Oct. 1, 2001, the Air Force reassigned Space and Missile Systems Center from Air Force Materiel Command to AFSPC. This realignment gave AFSPC control of the planning and requirements development for all technological aspects of USAF launch vehicles, spacecraft and missiles.

On the same date, AFSPC activated the 460th Air Base Wing to manage Buckley AFB, Colo., an installation transferred to the command from the Colorado Air National Guard one year earlier.

Since its birth in 1982, Air Force Space Command has progressed from being a promising new command to a command that, as Hartinger predicted 20 years ago: "Provides the operational pull to go with the technology push which has been the dominant factor in the space world since its inception."

There's no limit to what the next 20 years holds for the command.