Astronomers Discover the Wake of a Planet Around a Nearby Star

An international team of astronomers today report the discovery of a huge distorted disk of cold dust surrounding Fomalhaut - one of the brightest stars in the sky. The most likely cause of the distortion is the gravitational influence of a Saturn-like planet at a large distance from the star tugging on the disk. This provides some of the strongest evidence so far that Solar Systems similar in size, or even bigger than our own, are likely to exist.

Image: [enlarge] Artist's impression of the Fomalhaut planetary system. The star is surrounded by a vast disk of cold dust. The inner planets are sweeping up the dust creating an inner region devoid of material. Collisions between comets continually create more material for the disk. A Saturn-like planet, shown in the foreground, creates a wake through the dust as it orbits the star. This causes the outer disk to appear lumpy and distorted, as shown on the left. Illustration by David Hardy.

One hundred planets are already known to exist outside our Solar System - although none have yet been seen directly by a telescope. These planets have been nicknamed "hot-Jupiters" since they are roughly the size of the planet Jupiter, but have orbits much closer to their star than Jupiter is to our Sun. What is new and exciting about the observation of Fomalhaut is that it probes the space much more distant from the star - in fact, on scales of the orbits of Uranus, Neptune and beyond.

"We were amazed to find that the disk is actually bent about the star", said team leader Dr. Wayne Holland of the UK Astronomy Technology Centre (UK ATC) in Edinburgh. "This strongly suggests there is an orbiting giant planet shaping the dust we see".

Fomalhaut, which lies in the constellation of Piscis Austrinus (the Southern Fish) is only about 200 million years old - an infant compared to our own Sun at 4.5 billion years. This is not the first time that Holland and his collaborators have observed Fomalhaut.

"Our previous image did not have the resolution to pin-point the detail we are now seeing" said Dr. Jane Greaves, one of Holland's collaborators on the project. "We could see a hole in the disk near the star, and thought it was cleared out by the gravitational pull of a planet like Jupiter, but we had no idea there was anything further from the star."

A "doughnut" with a hole

The disk appears a bit like a doughnut with a hole in the centre around the star. "That's one way of describing it", laughs Greaves. "The Fomalhaut disk is close to edge-on as we see it, and in the image it looks like the ends of the 'doughnut' are brighter. The disk is about the same size as the Sun's Kuiper Belt of comets which orbits outside Neptune and Pluto and so we may be seeing a region near Fomalhaut that has many millions of comets".

Suddenly Fomalhaut doesn't sound like a fun place to be... A big comet that hit the Earth 65 million years ago is believed to have played a part in the extinction of the dinosaurs.

The most puzzling feature in the image is that the disk appears to bend around the star.

"Our models of the Fomalhaut disk suggest that a planet similar in mass to Saturn is creating a wake or trail of dust", says team member Dr. Mark Wyatt. "The gravity of the planet creates points near its orbit called 'resonances' where comets get trapped. When two comets collide, they release a shower of dust that we see as a bright spot in the disk."

Some years ago, infrared images from NASA's COBE satellite showed that Earth is preceded and trailed in its orbit about the Sun by clumps of dust particles that might have come from ancient comets.

"We believe Fomalhaut looks quite similar to our own Solar System when it was only 200 million years old", said Ben Zuckerman, Professor of Astronomy at University of California at Los Angeles. "At that age, a planetary system would already have formed. We would have trouble seeing it with optical telescopes because of the shroud of dust."

The dust disk is so cold, and emits so little light, that it is completely invisible to optical telescopes such as the Hubble Space Telescope. Instead the astronomers used a special telescope and camera which operates in the so-called "submillimetre" region of the electromagnetic spectrum, which lies between infrared light and radio waves.

"We used the James Clerk Maxwell Telescope in Hawaii - the world's largest telescope dedicated to the study of light at submillimetre wavelengths", Holland said. "With a specially cooled camera called SCUBA we were able to measure the tiny amounts of heat radiated by the dust particles that make up the disk".

SCUBA, which was built at the Royal Observatory, Edinburgh, has detectors that are cooled to just one-tenth of a degree above absolute zero (-273 degrees Celsius). It has already found young nurseries where stars are being born and has discovered distant galaxies near the edge of the Universe.

So, what's next for the team? Holland's team is now analysing SCUBA pictures of other bright stars, including Vega, which also show evidence of gravitationally disturbed dusty disks. Indeed the dusty structures visible in the SCUBA images indicate that massive planets having orbits as large, or larger, than those of Saturn, Uranus and Neptune must exist around many other stars. Even though no such extrasolar planet has yet been seen directly, the SCUBA images yield the first good observational evidence that massive planets with big orbits are really out there.

There are plans for a new large-scale survey of over 100 nearby stars. Holland is also leading a team to build a new, more powerful camera ('SCUBA-2').

"SCUBA-2 will be able to image disks, such as the one around Fomalhaut, in just a few minutes, instead of the many tens of hours it currently takes", says Prof. Ian Robson, Deputy Director of the UK ATC. "It will revolutionise our search for evidence of planetary systems". 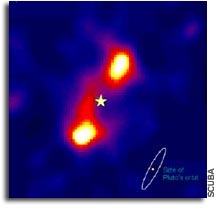 [enlarge] 1. SCUBA image of the dust disk around Fomalhaut. This is a false colour image of the dust emission around Fomalhaut taken with SCUBA at the James Clerk Maxwell Telescope. The image shows a huge disk-like structure where the brightest emission, and hence the most dust, is represented by the brightest colours (yellow in this case). The disk appears flattened because of the angle from which it is viewed from the Earth. The dust is most likely composed of silicate grains (sand), although we cannot tell that directly from these images. The position of the star is indicated by the "star" symbol. The stretched oval adjacent to the image shows the apparent diameter of our own planetary system if it were located at the distance of Fomalhaut. The Fomalhaut image appears like a 'doughnut' with a hole in the centre. It's possible that this hole has been caused by the accumulation of dust into planets like Earth. The gravitationally perturbed region is the red part to the left of the star.

This article also appears on the UK ATC website at: http://www.roe.ac.uk/atc

Other websites related to this work:

Fomalhaut is the 17th brightest star in the sky and lies in the constellation of Piscis Austrinus (the Southern Fish). The name "Fomalhaut" (pronounced "Fo-mal-ought") derives from the Arabic name for this star, Fum al Hut meaning "The Fish's Mouth." The alternative Latin names for the star, Os Piscis Meridiani or Os Piscis Notii mean "The Mouth of the Southern Fish". The Arabs also called Fomalhaut Difda al Auwel or Al Difdi` al Awwal ("The First Frog"). Fomalhaut is located about 25 light years away from our Sun, is estimated to be 2.3 times as massive as the Sun and about 1.7 times the diameter. The best estimate for the age of the star is 200 million years.

The UK Astronomy Technology Centre is located at the Royal Observatory, Edinburgh (ROE). It is a scientific site belonging to the Particle Physics and Astronomy Research Council (PPARC). The mission of the UK ATC is to support the mission and strategic aims of PPARC and to help keep the UK at the forefront of world astronomy by providing a UK focus for the design, production and promotion of state of the art astronomical technology.

The Royal Observatory, Edinburgh comprises the UK Astronomy Technology Centre (UK ATC) of the Particle Physics and Astronomy Research Council (PPARC), the Institute for Astronomy (IfA) of the University of Edinburgh and the ROE Visitor Centre.

The James Clerk Maxwell Telescope is the world's largest telescope dedicated to observations in the submillimetre part of the electromagnetic spectrum. It is operated by the Joint Astronomy Centre, on behalf of the UK Particle Physics and Astronomy Research Council, the Netherlands Organisation for Scientific Research, and the Canadian National Research Council.

PPARC is government funded and provides research grants and studentships to scientists in British universities, gives researchers access to world-class facilities and funds the UK membership of international bodies such as the European Organisation for Nuclear Research, CERN, the European Southern Observatory and the European Space Agency. It also contributes money for the UK telescopes overseas on La Palma, Hawaii, Australia and in Chile, the UK Astronomy Technology Centre at the Royal Observatory, Edinburgh and the MERLIN/VLBI National Facility.

This work was also supported, in part, by NSF and NASA grants to UCLA.