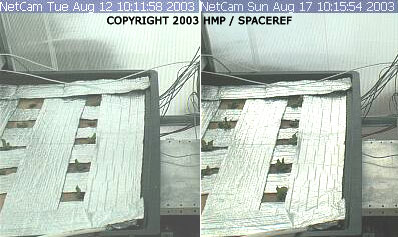 Three weeks after the last humans departed from NASA Haughton-Mars Project Base Camp on Devon Island, the Arthur Clarke Mars Greenhouse continues to operate - by itself. Its operations are monitored and controlled via satellite by researchers in Canada and the United States. Inside, a small crop of lettuce plants continues to grow.

The two webcam images shown above demonstrate the rate at which the lettuce crop is growing. Taken just 5 days apart, all plants show a signficant increase in size.

The greenhouse is currently powered by windmill and solar (photovoltaic) power generating systems and a computer-controlled propane heating system - all of which were also installed during the summer 2003 field season.

Together, these command and control and power generation systems have been providing a controlled environment within which lettuce seedlings have been growing in a hydroponic plant growth system. These plants can be seen in the growth tray on the left hand side of this webcam image. The growth tray on the right hand side contains lettuce seeds which will be germinated in Spring 2004 - by remote control - so as to produce a second crop.

Once additional satellite equipment is installed at Simon Fraser University in the coming weeks, the greenhouse will be sending back an increased amount of data as well as a daily webcam image from within the greenhouse. During the dark portion of the winter, interaction between researchers and the greenhouse will be limited to data. Images will resume once there is enough light to provide a usable image.

The Arthur Clarke Mars Greenhouse was donated to the NASA Haughton Mars Project by SpaceRef interactive in 2002 and was installed during last year's field season. Outfitting of the greenhouse in 2002 and in 2003 has been provided by the University of Guelph and Simon Fraser University under a grant from CRESTECH. Additional outfitting support has been provided by the Canadian Space Agency, SpaceRef Interactive (who donated the webcam and some sensors), the SETI Institute, and the Mars Institute.

2 June 2002:Earth on Mars: Greenhouses on the Red Planet, SpaceRef

SpaceRef Interactive Inc. has donated an experimental greenhouse located on Devon Island, Nunavut, Canada, in support of research conducted under the auspices of the NASA Haughton Mars Project (HMP). The HMP is an international interdisciplinary planetary analog field research program led by the SETI Institute. The greenhouse was installed in Summer 2002. It will be further equipped and its operation evaluated in Summer 2003.

In addition to ongoing sponsorship by SpaceRef Interactive, substantial support for the outfitting and operation of this greenhouse is being provided by Crestech, the University of Guelph, and Simon Fraser University.

The purpose of this greenhouse is to allow the growth, propagation and harvesting of selected plants in support of basic and applied research in the fields of astrobiology, space biology, life support systems studies, information technologies, and human factors investigations. This greenhouse will also serve as a test bed for the sensors, control, and communications systems required to operate the greenhouse in both the presence and absence of humans – as will likely be the case for a similar facility provided as part of a human base on Mars.

This greenhouse is not intended to be a full-featured, high-fidelity simulation of a greenhouse to be established on Mars. Rather, as is the case of most analog studies being conducted on Devon Island, it will support scientific and operations research in an operational setting that is relevant in unique ways to Mars - each at a specific level of fidelity and complexity. The intent is that this greenhouse will serve as an initial experimental field-deployed testbed that will support field research of inherent and immediate value, and from which lessons may be learned to support the design and implementation of future field facilities enabling higher fidelity demonstrations.

Ultimately, through a sequential and iterative program of experimentation, it is hoped that a better understanding of the operational challenges faced by future astronauts on the surface of Mars (or other planetary bodies) will be gained.

Greenhouse utilization will be coordinated by an executive team and a science advisory panel. Research to be conducted may include invited contributions to be solicited externally.

A Science Advisory Committee (SAC) has been formed to define the scientific focus and objectives of the Greenhouse project and to oversee the progress made in the research performed. The SAC is responsible in particular for defining the long-term research objectives to be achieved, for contributing to help secure the resources needed to achieve these research goals, and for overseeing the progress made towards the goals.

Sir Arthur C. Clarke, noted science and science fiction author, has generously allowed us to use his name on this experimental greenhouse and is following its progress with great enthusiasm.