SPECIAL to SpaceRef, By Dennis Wingo

The Hubble Space Telescope (HST) is an incredible national asset that must be preserved. Could you imagine a ground based telescope such as the Palomar 200 inch telescope being decommissioned just because there is not enough money to operate that beautiful scope and the Keck at the same time? Even today very old telescopes such as the 100 inch Mount Wilson telescope, which Edwin Hubble used to discover galaxies outside our own and develop the theory of the expanding universe, is still in use producing quality science.

Over time older telescopes are switched to new tasks, many of which at the time seemed to be of low priority, such as the catalogue of Near Earth Objects (NEO’s), but later created a revolution in sciences as diverse as paleontology and evolutionary biology. The telescopes that have led these discoveries are typically no larger than 36 inches in diameter. Can it be that we really do not have the resources to save and extend the life of HST?

The arguments post Columbia merit serious consideration. Dr. John Grunsfeld, who has had the privilege of servicing HST twice, has personally told me that he is willing to risk his life for science. However, he and the other members of the team evaluating the options for HST is right in being conservative with the remaining assets of the Shuttle fleet in not wanting to risk those assets so that the Smithsonian can have a nice new display. The question then becomes, what are the national options left open?

It seems that the baseline is to attach some engine to HST and use that engine to deorbit the bird around 2010. While this is the most conservative approach it is not without risk itself and is far from the desirable solution. If that engine is attached in a servicing mission in 2006, there is a risk much larger than zero that over four years of thermal cycling that the engine may not do its job or that the HST gyros may fail precipitating a premature decision to deorbit the system early. This has been a driver for the consideration of a later mission to attach the motor and do one final servicing mission.

A final servicing mission in the late 2009 timeframe, though costly, is another option. It would at least allow HST to operate until the James Webb Space Telescope (JWST) comes on line in 2011. However, what happens if the JWST fails to deploy its mirrors or suffers some equally damaging problem such as Hubble originally had? The JWST is going to deploy its mirrors and sunshades at the Earth L2 libration point, far from the ability of man to service or correct any defects in the system. That has been a major driver in cost increases in the system so far. However, we all know that these things fail. What if JWST fails to deliver on its promise and HST is swimming with the fishes? This scenario has a much larger than zero chance and must be part of the equation relating to the future of HST. As an engineer who has participated in many of the post Hubble deliberations over the last year with NASA it behooves us to place further options on the table for consideration.

Orbital Recovery Corporation (ORC) is developing a Spacecraft Life Extension System or SLES for the life extension of GEO orbiting spacecraft. It has occurred to us that this system could be used for HST life extension as well. The SLES (patent pending) is a space tug currently in the advanced development stage that has the ability to lift multi-ton GEO spacecraft from intermediate orbits to GEO, take over the attitude control and station keeping of these large spacecraft. It could do the same for the HST. Our initial calculations indicate that, with the appropriately size solar arrays and fuel load, that our solar electric propulsion system could either boost HST to a very long lived high earth orbit where it could be stored or even do a plane change to move it to the International Space Station (ISS) where it could be serviced repeatedly and reboosted by the SLES to a high orbit above ISS. The picture included here shows the SLES boosting HST. At no time would we advocate the total loss of HST as a ballisticly implanted reef in the pacific. 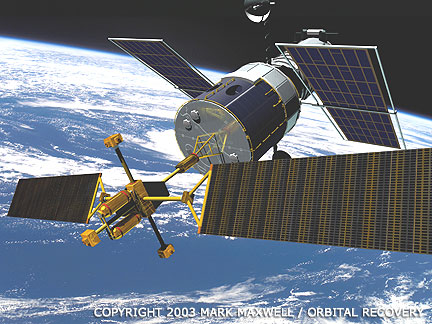 This is not a technology that is beyond our grasp requiring hundreds of millions of dollars to develop. Our solar electric propulsion system is in the advanced development stage, has at least three U.S. vendors of the Hall Effect electric thrusters, and could be ready to fly by a 2006 Shuttle mission to HST or lofted later for an autonomous rendezvous and docking similar to our standard mission scenario. We are working with the German Space Agency DLR to commercialize their expertise in flight proven software and existing hardware for our GEO application that can be extended to this mission. ORC and its partners have put over $2M dollars into the development of this system and has been independently validated by top U.S. aerospace consulting firms. We have a commercial price that is less than a typical Discovery class scientific mission. This is not a dreamsat mission as Deke Slayton used to say, it is a real option for the U.S. to preserve and extend the life of a telescope that has provided remarkable science and intensely beautiful images that has brought the magnificence of the universe into our lives. 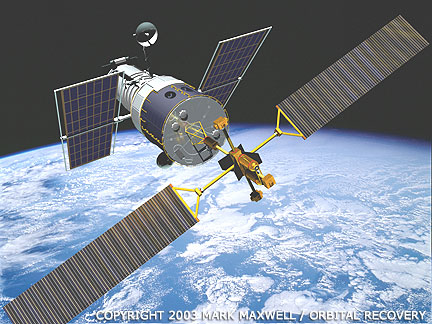