To document what we do onboard, as well as to take photos of the Earth, we have some very nice camera equipment here. As the weeks go by I'm finding that I am managing to take better and better photos and video - so there is something after all to this whole concept of practice. Before flight, our instructors, Mark, Steve and Olga, taught us not only how to use the photo and video equipment itself, but also how to frame and shoot nice photos. It was great fun learning all of this, and even more fun getting to put it to good use.

Since there is only limited room in the Soyuz capsule to bring things up here and back home (besides us), we are not using regular film for our photos. Instead all of our still photographs are now digital. Our digital cameras are 35mm and have a 2000 by 3000 CCD matrix, so they take pictures almost as good as you can get on regular film. We downlink our photos each day to the ground, where there is a group of people who process them. We get occasional e-mails from Mark and Steve pointing out mistakes we've made and things we can do better - and by the way our photos have improved, I hope they see they are making a difference!

We have quite a few lenses we can attach to the 35mm digital cameras - ranging from a 16mm fisheye, wide-angle lens and all the way up to a 400 mm monster telephoto. We also have a doubler so we can turn our 400 mm lens into an 800 mm lens. For interior shots, we mostly use a 24 mm to 85 mm zoom lens with a flash. We've also taken some interior photos without a flash that came out pretty well. Since there are only two of us, if we are both working on something and we'd like some photos of the operation, we set our camera up on a bracket, and program it to take a series of photos automatically every few minutes. Every once in a while we get a good one this way.

When shooting out the window, the most common lenses we use are the 50 mm for wide shots, the 180 mm for taking pictures of regional areas (like a city and surrounding regions), 400 mm for close-up city shots or places of geographical interest (like volcanoes), and the 800 mm lens for close-up shots where you can see details like individual trees and small buildings. I usually set the exposure time to around 1/500th of a second, and let the camera automatically set the aperture, or F-stop. It has taken a lot of practice to get better at taking these shots.

The first part about shooting pictures of, say a city or some geographic feature, is of course spotting it on the ground. Sometimes that isn't easy because all the nice reference lines that you see on a map aren't actually drawn on the ground. Lakes and shorelines are the best landmarks to find a small target since they are very easy to spot. Although sometimes lakes do not look like they are drawn on the map since many of them change shape as water levels rise and fall. Rivers are good landmarks if they go through a dry area - then the river and the surrounding green vegetation will stand out very well against the brown background. Rivers in heavily forested areas do not stand out and are easily mistaken for one another if there are many rivers in the same area. For instance, since the beginning of the mission I have been trying to shoot a photo of Machu Picchu, the ancient Inca city built on a mountaintop in Peru. It is located in a heavily forested mountainous area along the Urubamba River north of the city of Cuzco. The problem is that there are several rivers in that area, none of which are easy to spot, and they all look the same from 300 miles away. I have taken maybe a hundred photos of the area, but have yet to capture it in a picture!

Once you have spotted what you want to take a photo of, the next problem is holding the camera steady enough to take a nice photo. When using the 50 mm or 180 mm lens, this is pretty easy. But when using the 400 mm or 800 mm lens it takes some practice. That's because the field of view of these lenses is so small that the motion of the Space Station in orbit is enough to blur the photos. When shooting with the big 800 mm lens, the field of view covers only maybe 10 miles on the ground. That means we can in principle see objects as small as a car. The problem is that we are moving about 5 miles per second, so if we use a shutter speed of say 1/500th of a second, we will move about 50 feet in just the time the shutter is open. This means that if we hold the camera perfectly still, it will smear out the images by 50 feet. If the shutter speed is set to 1/1000th of a second, there typically isn't enough light in the image and it comes out too dark. So I usually use about 1/800th of a second. To get better resolution, you have to track the camera to follow your target. Things move quickly in the viewfinder so you have to pretty rapidly find what you are looking for, start swiveling the camera to keep the scene stationary in the viewfinder, and snap the picture. If you do it right, you can spot houses, trees, and sometimes even cars on the road. A few weeks ago I wrote about trying to snap a photo of the Experimental Aircraft Association fly-in at Oshkosh. I did manage to get a nice photo of the airfield where you can make out the thousands of individual airplanes parked on the field. You can even see the smoke trail of a small airplane performing an airshow at the time.

As for the video equipment, we have both small hand-held digital camcorders and a full professional video/audio recording setup in the Service Module. The camcorders are nice because they are small and easy to set up, and because editing is really easy since they have a digital high-speed connection. One of the things I've been using the camcorders for is to record images of lightning storms from space. While your eyes are much more sensitive than the cameras, the camcorders do a surprisingly good job with nighttime shots. We also use these camcorders to downlink live video to the ground (they connect to any of several data transfer ports we have onboard).

As a friend said to me, if nothing else at the end of this mission I'll have the best photo album around! 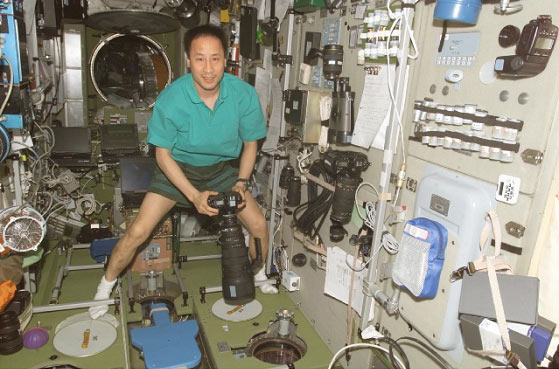 This is me holding the digital camera with the 800 mm lens attached. The portholes in the floor are where we take most of our pictures of the Earth. On the wall you can see some of our other photo/video equipment. 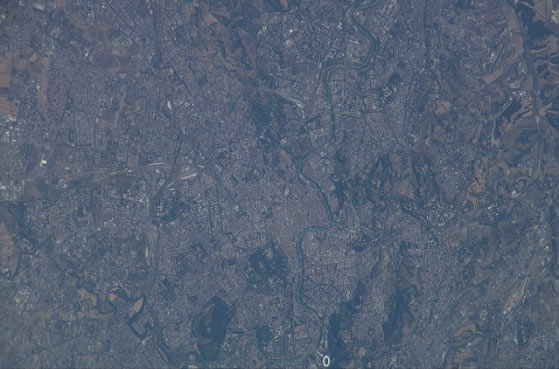 An example of the kind of detail visible with the 800mm lens - this is the city of Rome. Get yourself a map of Rome (on the internet of course), then zoom in on the photo. Use the river snaking through the city to get your bearings. You can see the dome of St. Peter's Cathedral in the Vatican, the Roman Coliseum, the old Roman Senate, as well as more modern features like the train station and the soccer stadium.