The Undersecretary of Defense (Acquisition, Technology, and Logistics) and the Secretary of the Air Force cosponsored the Joint Defense Science Board (DSB)/Air Force Science Advisory Board (AFSAB) Task Force on the Acquisition of National Security Space Programs and directed the task force to

Over the course of its deliberations, the task force met with responsible representatives of acquisition- and operation-oriented government organizations, visited national security space contractors, and reviewed a broad spectrum of space programs and issues. The panel also interviewed senior government and industry officials, both active and retired. The scope of the study included both classified and unclassified space acquisition activities.

The task force conducted meetings during the latter part of 2002 and evaluated issues that have developed over years of acquisition activity. In so doing, we observed many positive steps already being taken to try to correct deficiencies in the space acquisition process. We did not attempt to investigate or evaluate initiatives that were already underway. 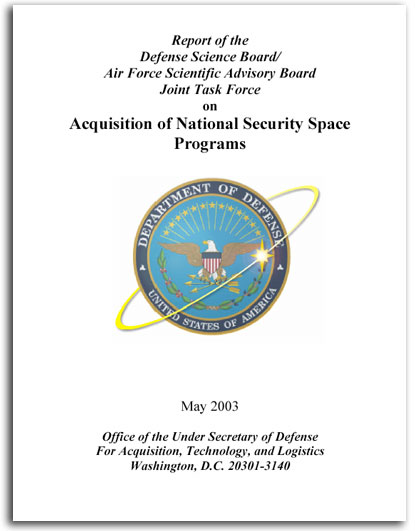 During the 1990s, several changes occurred in the national security space environment:

All of this took place in the face of changing national security needs as the Department of Defense (DoD) transitioned from the structured cold war environment to the more global and unpredictable threat environment we see today. The following list summarizes the task force's key findings:

Widespread shortfalls exist in the experience level of government acquisition managers, with too many inexperienced personnel and too few seasoned professionals. This problem was many years in the making and will require many years to correct. The lack of dedicated career field management for space and acquisition personnel has exacerbated this situation. In the interim, special measures are required to mitigate this failure.

The government acquisition environment has encouraged excessive optimism and a "can do" spirit. Program managers have accepted programs with inadequate resources and excessive levels of risk. In some cases, they have avoided reporting negative indicators and major problems and have been discouraged from reporting problems and concerns to higher levels for timely corrective action.

In the far term, there are significant concerns. The aerospace industry is characterized by an aging workforce, with a significant portion of this force eligible for retirement currently or in the near future. Developing, acquiring, and retaining top-level engineers and managers for national security space will be a continuing challenge, particularly since a significant fraction of the engineering graduates of our universities are foreign students.

The task force found significant, systemic problems in the acquisition of national security space systems that require immediate attention, both to correct current deficiencies and to prevent these deficiencies in future programs. The panel recommends the following immediate actions:

1. The Under Secretary of the Air Force/Director National Reconnaissance Office (USecAF/DNRO) should establish mission success as the guiding principle in all space systems acquisition. This requires incorporation of the principle in policy statements, leadership actions, and contractual provisions and incentives.

2. The SecDef should establish the same authority for the USecAF for DoD space programs as the DNRO has for implementing the National ReconnaissanceProgram (NRP) budget.

3. To ensure realistic budgets and cost estimates, the USecAF/DNRO should

4. The USecAF/DNRO should compete space system acquisitions only when clearly in the best interest of the government (e.g., new mission capability, major new technology, or poor incumbent performance). When a competition occurs and a nonincumbent is the winner, the loss of investment in the losing incumbent must be reflected in the program budget and plan. In addition, provisions must be made to assure continuity between the legacy system and the new system.

7. The Commander, Air Force Space Command, should complete the ongoing effort to establish a dedicated career field for space operations and acquisition personnel.

8. The USecAF/DNRO should require that key program management tours be a minimum of 4 years.

9. The USecAF/DNRO should, through policy and leadership action, clearly define the responsibility, authority, and accountability for program managers, recognizing the criticality of program managers to the success of their programs. In selecting managers, acquisition experience must be a prerequisite.

11. The USecAF/DNRO should require program managers to identify and report potential problems early.

12. The USecAF/DNRO should demand that national security space contractors

Findings. SBIRS High has been a troubled program that could be considered a case study for how not to execute a space program. The program has been restructured and recertified and the task force assessment is that the corrective actions appear positive. However, the changes in the program are enormous and close monitoring of these actions will be necessary.

Recommendations. The task force recommends proceeding with the restructured program. However, the program implementation to date has been during an era of questionable program practices. The task force recommends a review of past engineering and test activities to assure acceptable quality of the product. It is critically important that a competent and complete test program be implemented for SBIRS High. This may

Acquisition of National Security Space Programs necessitate additional testing to mitigate omissions and embedded problems that would otherwise manifest themselves as mission critical failures on orbit. While we were impressed with the current program management, additional experienced managers are required to execute the program successfully.

Recommendations. The task force concludes that the FIA deficiencies can be mitigated sufficiently to permit the program to continue. The program funding must be augmented to reflect a most probable (80 percent) cost. Significant program and schedule changes will be required to maximize the probability of mission success. An independent review should be implemented to assess the adequacy of the restructured program. Finally, the same recommendation relative to past engineering and test activities cited for SBIRS High applies to FIA.

Recommendations. The task force recommends that the SecDef initiate actions to incorporate assured access to space into national security policy. The task force recommends that the USecAF/DNRO establish a long-term plan for the EELV program. This plan should (1) address the requirement for U.S. production of the RD-180 engine, West Coast launch, and dual manifesting; and (2) define the approach to future contracting, including any potential downselect and associated funding. The government must take funding actions beginning no later than FY04 to assure that both EELV programs remain viable.