After our 6 months in space, we will have actually aged slightly less than everyone else on the ground because of an effect called time dilation. It isn't by much (about 0.007 seconds), but it is one side benefit of flying in space! For a little change of pace, I decided to write this letter for the physicists and engineers out there. The beginning part is more general, but if you haven't studied university level physics some of the details may be a bit obscure. Hopefully though you'll still find this interesting, and who knows, maybe it will inspire you to learn more about relativity!

As Einstein first figured out, the concepts of length, energy, mass, and time all depend on how fast you are moving. The reason is the observed experimental fact that no matter how fast you are moving, if you measure the speed of light you always get the same value (this is another way of saying you can't measure your own absolute speed, but rather only relative to something else). Think about two different people who are each moving at different speeds while each simultaneously measures the speed of a light beam. They will each measure the same speed of light, even though they themselves are moving relative to one another. The only way this can be possible is if one's standards of both length and time (what you use when you measure speed) depend on your relative speed. In fact, if you stand on the ground and watch somebody else fly past, you will say that their clocks are moving slower and that they have shrunk. The speed of time depends on your relative speed. This effect is called time dilation. Similarly, the length of an object (along the direction of motion) also shrinks. These effects are really small for speeds much less than the speed of light (300,000 km/sec), which is why nobody ever noticed it before the beginning part of the 20th century. This result has been verified thousands of times with thousands of different experiments since then and is now considered an established fact. But what I started to wonder was if it is possible for me to observe a relativistic effect using a simple experiment (and no elaborate hardware) up here. After all we are moving at what is by everyday standards really fast (18,000 MPH). The problem is that by relativistic standards we are still moving incredibly slow, only about 3E-5 times the speed of light (this number is usually referred to as beta). For small beta, the time dilation effect that causes clocks to move slower goes as beta squared over 2, or about 5E-10,which is a really, really small effect.

Since we are up here for a long time, the first thought was to see if there was a way to measure the time dilation directly. Since there are pi E7 seconds in a year, after 6 months moving at beta 3E-5 we only get a difference of about 7E-3 seconds between our clocks and those on the ground. This is pretty tough to measure since you need two clocks (one on the ground and one here) that are stable and accurate enough over 6 months to distinguish the difference. There are clocks this accurate, but we don't have one on board, and besides, the goal was to see if I could measure the effect without a special apparatus. Similarly, the length contraction that the Space Station undergoes due to its orbital speed is also tiny, about 2.5E-6 cm. You can't measure it from onboard anyhow, since everything here is also moving at the same speed, and therefore is also shrunk by the same fraction. Our onboard GPS receivers that we use for navigation do have to take into account relativity when calculating our position and velocity, but I can't really claim credit for that.

The next thought was to look for Doppler shifts, as it is pretty easy to measure frequencies. The problem is that the first order Doppler shift (the term that goes as beta) is exactly the same as the ordinary Galilean Doppler shift. So that doesn't really count as a relativistic effect. So once again, we are looking for a second order beta squared effect on top of the first order effect. And again I couldn't figure out a way to do that up here. We do have basic lab equipment (voltmeters, oscilloscopes, signal generators, etc.), but a few part in 10^10 effect is pretty hard to see. After thinking about it for months, I haven't managed to come up with any good ideas. Perhaps somebody out there has a good idea that one of the future crews could try in their spare time for fun.
Which way is up all depends on which way you look at it.

But while I haven't found a way to observe a direct relativistic effect, in a desperate attempt to claim some sort of victory, I can sort of argue that I have been able to observe another effect that does depend upon relativity. We know that light carries energy and momentum. If you consider that light is made up of massless particles (photons), then the fact that photons carry momentum is a relativistic effect. Of course, you can always argue that even classical non-relativistic waves carry both energy and momentum - but for the purposes of trying to claim at least a partial victory I am going to stick to the particle interpretation.

And in fact it does seem to be possible to observe light pressure up here. Our drink packages come wrapped in a very thin silvery reflective film. I cut a small square of this film, and placed it inside our glovebox - a chamber we use to run certain experiments. The glovebox has a transparent face and is fully enclosed, so it should be free from air currents inside. After much practice, I can manage to release the small square, and get it to float fairly motionless while I close up the glovebox. Then by shining a flashlight in through the front, I find that I can slowly accelerate the reflective film square. After shining the flashlight on it for about 30 seconds, the square will be moving a few tenths of a centimeter per second. One thing I am not sure of is that this effect is due to radiation pressure. As my friend Pawan pointed out, any small differential heating between one side of the film and the other could cause a force from air molecules ricocheting off the film slightly faster on one side. But since the film is extremely thin, the differential temperature from the illuminated side to the other side should be small. In addition, the film is a reflective silver color and so should reflect most of the light rather than absorbing it and heating up.

My very rough order of magnitude calculations are that the acceleration is about right for the expected light pressure. I don't know the mass of the piece of film exactly, but estimated it by guessing that if stacked up there would be roughly 500 layers in a centimeter, and assuming a density of twice that of water. I then estimated that the flashlight (one of those big ones with 4 D-cells) puts out about one-tenth the light per unit area as sunlight (I measured this by using the light-meter from a camera). The solar illumination is about 1 kilowatt per square meter, so I used a value of 100 Watts per square meter for the flashlight. By my calculations after 30 seconds that should lead to a velocity of order a half mm per second - which is pretty close given the uncertainties in all my estimates. I've been trying to figure out a way to experimentally rule out differential heating, but I am running out of time - we only have a few days until Expedition 8 gets here! I guess it will have to wait until my next flight.

So there you have it, partial victory, in a sort of legalese fashion. Well, even if I am wrong, at least I'll be 0.007 seconds younger than everyone else when I get home! 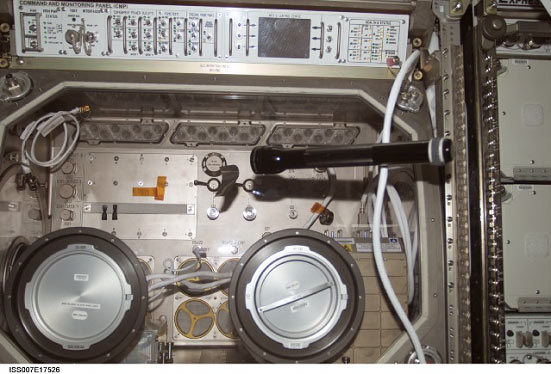 This is the glovebox with the reflective film square floating inside and the flashlight floating outside.