We have visitors! Soyuz TMA-3 arrived the other day with Sasha, Mike, and Pedro. We'll spend one week passing on things we've learned here, and then hand the keys to Mike and Sasha. Yuri, Pedro and I will fly home in the Soyuz that Yuri and I flew here 6 months ago. It feels strange to leave this place - I've enjoyed it immensely, but all the same it is time to go home. The 6 months have gone by fast, and it is hard to believe how much has happened since we first launched.

First, a few updates on some things I've mentioned in previous letters. In the letter on flying (5 months ago!) I describe how I was getting better but still had a long way to go to match the Expedition 6 crew. By now I think I move around here just as well as they did. Yuri and I almost never run into anything now, and I can zip from one end of the station to the other in no time. My technique for flying is a little different. Instead of flying headfirst like Superman, which requires that you first rotate your body so that it is pointing where you want to go, I find that it is easiest to simply launch yourself in whatever direction your body is aligned. Then I use a hand to absorb the energy and rebound off the wall or ceiling while changing my direction as well as rotating my body, then again rebound off the next surface with my feet. Each time I rebound I slowly correct my direction and rotation until I am going where I want. Usually it only takes 2 bounces. If you've ever seen the cartoon "The Tick" - I move around something like the Tick when he bounds around the city, except I don't crush anything. I like to do flips and spins when I fly around now.

I still haven't managed to take a photo of Machu Picchu, even though I've tried countless times. The weather never seems to cooperate, plus it is a tough thing to find up in the mountains. I've also not managed to take a good photo of the Great Wall of China, even though I do have some photos of areas it runs through. It just isn't obvious in any of the photos. I have, however, taken photos of all the locations of the 7 Wonders of the Ancient World. Besides all this I have amassed a pretty good collection of photos of various cities, sites, and geographic features around the planet. One of the fun photo projects I've been working on with the NASA Educational Office is to take photographs of sites visited by the explorers Lewis and Clark. This year is the 200th anniversary of the start of the Lewis and Clark expedition to survey the Louisiana Purchase. What they did was an amazing accomplishment - these guys traversed and surveyed thousands of miles of territory on foot, horseback, and canoe over a period of 3 years. Now that was real exploration! 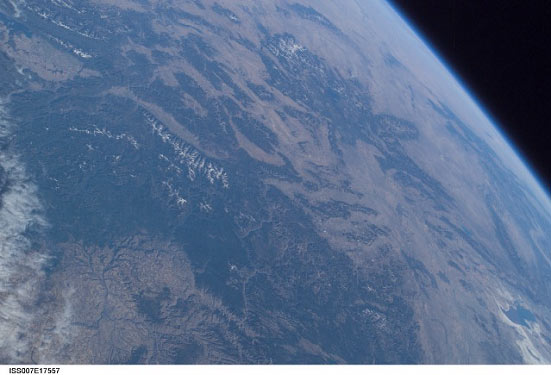 Lewis and Clark surveyed on foot, canoe, and horseback from the near end of this picture (over Oregon) to over the horizon on the far end of the picture (the East Coast).

Hopefully, what we are doing up here will someday help us to explore deep space, as we revisit the moon, go on to explore asteroids, and one day settle on Mars. I often hear that our space program is all about doing science. It is about much more than that. It is about opening up a new frontier for commerce, trade, and settlement, as well as doing science. The advent of ocean-going ships in the 1400s was a huge boon to science, not because we did scientific experiments on the ships, but because the ships took us to places we had never dreamed of before, and changed peoples lives by opening up new settlements and trade routes. In the same way I think we will reap additional scientific benefits of the space station when we use it to help us learn how to send people to the far reaches of the Solar System.

And speaking of space exploration, last week we had company for one day as China launched a manned spacecraft with astronaut Yang LiWei on board. He was in space for less than one day, but it was nice to know we were sharing the sky with someone else. The more people in space, the better!

Well, time is running short, so I'll end this letter here. It's been a great 6 months. We'll see you on the ground!