The Columbia Accident Investigation Board uncovered some very specific conditions that led to the demise of the Columbia along with some process and management structures that contributed to the accident. In a sense, the loss of the Columbia was caused by faulty assumptions, two to be precise:

1. Foam shed from the External Tank (ET) would be "transported" around the leading edge of the wing by the aerodynamics of the shuttle; and,

2. The foam was not substantial enough to develop a ballistic moment capable of puncturing the material (RCC) composing the leading edge of the wing.

It turns out that both assumptions, long-held and widely-shared within NASA were wrong, despite previous launches where foam was shed and little damage done-seemingly validating the assumptions. Thus, the "conditioned" response of senior managers to more junior members, who questioned these assumptions after the Columbia launched, was one of discouraging dissent and of comfort with established technical and operational assumptions, a problem exacerbated by systemic failures that precluded critical information getting to the right people at the right time. 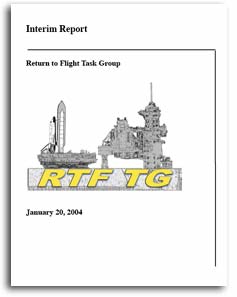 In this light, the technical and operational challenges for NASA are to rectify the consequences of these faulty assumptions by, for example, removing foam debris sources, enhancing photography, improving on-orbit inspections, and developing on-orbit Thermal Protection System (TPS) repair. The primary challenge for NASA's management is to devise an organization with embedded processes to identify other faulty assumptions.

Because of the substantial changes to foam insulation and inspection techniques for the external tank and the current lack of understanding of the foam shedding phenomena, the STS-114 ascent must be considered a test flight. As such, the RTF TG expects NASA to capture as much test data as possible during ascent, particularly in regards to the imaging recommendations of the CAIB.

NASA has responded to all the recommendations the CAIB identified for accomplishment before the next shuttle flight (See: NASA's Implementation Plan for Space Shuttle Return to Flight and Beyond, Revision 1.1). This report is based on materials available to the RTF TG as of December 10, 2003. Not surprisingly, the progress on the many recommendations is uneven. Several of the technical responses to specific recommendations have made substantial progress, although none have been completed. Others, such as preparation of a detailed plan for the implementation of an Independent Technical Engineering Authority (ITEA), are still in planning and some time away from implementation and a long time away from evaluation.

While the tone of this interim report is justifiably positive, progress should not be mistaken for accomplishment. As time passes and the interval before the next scheduled flight diminishes, the enormity of the remaining task looms. Detailed plans for many of the recommendations have not been forthcoming. NASA has not been timely in some of their responses to Task Group requests for information. And while some of the most critical organizational issues raised by CAIB require only a "detailed plan" before return-to-flight, the RTF TG will be looking for thorough plans and processes that will stand the test of time-not just suffice for the first launch-just as the hardware redesigns are expected to serve the life of the shuttle.

The organization and content of this report are intended to begin the task of laying out for the public and for NASA what the RTF TG will expect, both in content and process, and offers the beginning of metrics to judge progress and completion. It is still much too soon to predict either the success of implementation or the timing of the next flight.