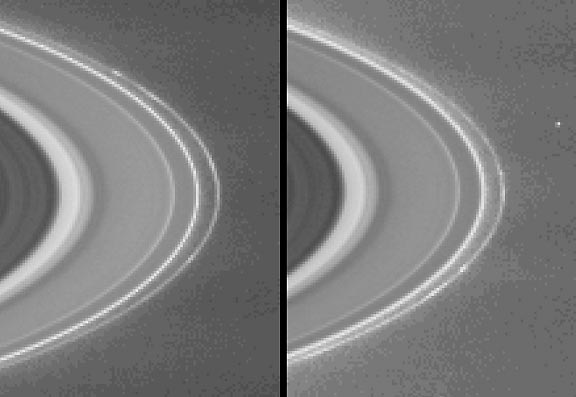 The core of the F ring is about 50 kilometers (31 miles) wide, and from Cassini's current distance, is not fully resolvable. Contrast has been greatly enhanced, and the images have been magnified, to aid visibility of the F Ring and the clump features.

The images show clumps as they revolve about the planet. Like all particles in Saturn's ring system, these features orbit the planet in the same direction in which the planet rotates. This direction is clockwise as seen from Cassini's southern vantage point below the ring plane. Two clumps in particular, one of them extended, can be seen in the upper part of the F ring in the image on the left, and in the lower part of the ring in the image on the right. Other knot-like irregularities in the ring's brightness can also be seen in the right hand image.

Clumps such as these were first seen when the two Voyager spacecraft flew past Saturn in 1980 and 1981. It is not certain what causes these features, though several theories have been proposed, including meteoroid bombardment and inter-particle collisions in the F ring.

The Voyager data suggest that while the clumps change very little and can be tracked as they orbit for 30 days or more, no identified clump survived from the Voyager 1 flyby to the Voyager 2 flyby nine months later. Thus, scientists have only a rough idea of the lifetime of clumps in Saturn's rings - a mystery that Cassini may help to answer.

The small dot at center right in the second image is one of Saturn's small moons, Janus (181 kilometers, 112 miles across). Janus was discovered by ground-based astronomers in 1966, and was first resolved by the Voyager 1 spacecraft in 1980. The moon shares almost the same orbit with another small satellite, Epimetheus. Janus and Epimetheus, both thought to consist mostly of porous ices, play a role in maintaining the outer edge of Saturn's A ring.

The Cassini-Huygens mission is a cooperative project of NASA, the European Space Agency and the Italian Space Agency. The Jet Propulsion Laboratory, a division of the California Institute of Technology in Pasadena, manages the Cassini-Huygens mission for NASA's Office of Space Science, Washington, D.C. The imaging team is based at the Space Science Institute, Boulder, Colorado.

For information about the Cassini-Huygens mission, http://saturn.jpl.nasa.gov and the Cassini imaging team home page, http://ciclops.org.