Mr Chairman and members of the committee, thank you for inviting me here today to testify on the subject of lunar resources.

The lunar surface is rich in a variety of minerals such as oxides of iron and titanium and it is possible that these minerals can be utilized to provide resources such as oxygen to sustain an extended human presence on the Moon. Recoverable amounts of one vital commodity, hydrogen, needed to produce water and possibly rocket fuel, appear to be in short supply in the lunar soil. Consequently, the idea that the polar regions of the Moon may harbor ice deposits, first suggested over 40 years ago, continues to be of great interest. In the early 1990s the idea was given further impetus by the discovery of apparent ice deposits in the cold, permanently shaded bottoms of impact crater at the poles of the planet Mercury. The discovery and investigation of these ice deposits were made using powerful radar systems on one of NASA's Deep Space Network (DSN) Goldstone antennas and on the NSF's Arecibo telescope (operated by Cornell University under a cooperative agreement with the NSF) in Puerto Rico. Ice at low temperatures has unusual radar reflection properties - it "lights up" under the radar illumination very much like a highway sign at night and the reflected radar signal has different polarization properties than for rock or soil - but only if it is in the form of thick, relatively pure deposits. As can be seen in radar image of the north polar region of Mercury made at the NSF's Arecibo Observatory in Puerto Rico, the ice deposits stand out very brightly on Mercury.

Figure: A radar image of the north pole of Mercury showing the bright radar echoes from what are thought to be thick deposits of ice on the shadowed floors of impact craters. The circles show the sizes and locations of known impact craters from images taken in 1974 from the Mariner 10 spacecraft. The ice stands out so brightly because it is a good retro- reflector. The radar echoes from the surrounding terrain are so weak that they cannot be seen. The image was made with the NSF's Arecibo telescope (courtesy of J. Harmon).

Ice can also be identified by using a neutron spectrometer to map the properties of cosmic ray produced neutrons that scatter in the top few feet of a planetary surface with the nature of the scattering being very sensitive to the presence of the nuclei of hydrogen atoms and, hence, water ice if the hydrogen is incorporated in water molecules. The ability of neutron spectrometers to detect the presence of water ice was dramatically demonstrated by the recent discovery of considerable ground ice deposits on Mars. How much water may be trapped on the lunar surface?

Over the past decade there has been evidence from instruments on lunar orbiting spacecraft suggestive of the presence of water ice in the polar regions. Results from bi- static radar observations using the Clementine orbiter - the radar signal was transmitted from the spacecraft and the echo received by one of NASA's DSN antennas - were interpreted as indicating the presence of thick deposits of ice in a crater at the south pole. The interpretation of the Clementine results has been debated in the scientific literature and, as can be seen from the figure, imaging radar observations using the NSF's Arecibo Observatory have not found any evidence for ice deposits on the Moon similar to those seen at the poles of Mercury. However, since neither the Clementine nor the Arecibo 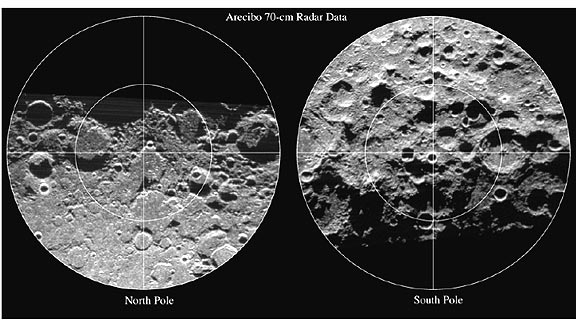 Figure: Radar images of the poles of the Moon made with the NSF's Arecibo telescope.

Much of the area close to the poles themselves, especially at the south pole, is in shadow from the Sun and cannot be seen in optical images. The radar on the earth is higher above the horizon than the Sun so can "see" some of these shaded areas. There are no bright radar echoes similar to those for Mercury indicating no thick deposits of clean water ice. Only some of the shaded areas can be seen with the radar and it is possible that ice may be present in locations yet to be investigated. (Image courtesy of B. Campbell.) observations were able to view some or all of the shaded bottoms of the impact craters at the lunar poles, these observations cannot be regarded as definitive. While perhaps unlikely, the possibility still exists that there are thick ice deposits in the bottoms of some shaded impact craters at the lunar poles.

Measurements from the Lunar Prospector orbiter are not open to this level of uncertainty. Its neutron spectrometer looked directly down so could view all of the polar terrain. As discussed above, this instrument is sensitive to the presence of hydrogen atoms and it discovered significant concentrations of hydrogen in the lunar polar regions. Its best spatial resolution on the Moon's surface was about 30 miles. As reported by William Feldman of the Los Alamos National Laboratory and colleagues, near the south pole there is a small general increase in the hydrogen concentration compared with the equatorial regions and there are significant concentrations associated with large impact craters with shaded bottoms. In the north there is a similar general increase in the average concentration of hydrogen. However, most of the impact craters with shaded bottoms are small, so that the hydrogen deposits cannot be uniquely associated with individual shadowed craters and it is not possible to say whether there are areas with significant concentrations. There are definitely higher concentrations of hydrogen at the lunar poles compared with other areas of the moon but both its origin - cometary impacts or solar wind implanted hydrogen - and its current form - hydrogen, ice or hydrated minerals - is a topic of considerable discussion in the relevant scientific community.

If all of the hydrogen at the lunar poles is in the form of ice, then an analysis of the Lunar Prospector results by Dr Feldman and colleagues has shown that the total inventory of water ice in the upper three feet or so would be about 2 billion tons. Considering just the shaded areas at the south pole, where the only economically recoverable deposits discovered so far seem to reside, they concluded that the weight concentration of water ice in the upper 3 ft would be about 1.5%. Taking our best estimates of the total shaded area at the south pole, this translates into about two hundred million tons of water equivalent. This water is likely distributed as ice grains or crystals in the lunar soil and would not have been observable by either the Clementine orbiter or earth based radars. Because of the poor spatial resolution of the neutron spectrometer on the Lunar Prospector orbiter, it is not possible to say from current data whether there are small areas where there may be even higher concentrations of ice.

Is finding water important for exploiting the Moon for scientific or economic purposes?

Accessible deposits of water on the Moon would profoundly affect the economics and viability of a human presence on the Moon. Water is, literally, the stuff of life. For a permanent or reusable base a local supply would be invaluable both for human needs in the form of water and oxygen, and for production of rocket fuel. A viable base would enable both further exploration of the Moon and, as Dr Spudis and others have pointed out, has the potential to allow exploitation of lunar resources.

However, the need is for accessible deposits. Unfortunately, the only recoverable deposits are likely to be in the polar regions probably in the bottoms of very cold, permanently dark craters. It is likely, but not certain, that any deposits are well mixed into the lunar soil at about the 1% level of concentration. Recovering water from these deposits will not be an easy task.

Before we spend too much time making plans for exploiting water resources on the Moon, we should determine whether there are any recoverable deposits of water, in what form - distributed at low concentrations in the lunar soil or in concentrated deposits - of what type - ice or hydrated minerals - and how accessible. To do this we need to send one or more missions with these specific objectives.

Detecting water ice in the cold, dark bottoms of impact craters in the lunar polar regions is extremely difficult especially if the ice is covered by, or imbedded in, the lunar soil. Two remote sensing techniques that we have available, imaging radars and neutron spectrometers, offer the best hope. If the ice is in the form of thick sheets, then it is possible that a radar system on an orbiter would detect the associated strong radar reflection properties even if the ice lies beneath a surface covering of lunar soil. Depending on its frequency of operation, a radar system could probe many feet into the lunar surface to search for buried deposits. According to Dr Feldman, neutron spectrometers with about ten times the spatial resolution of the instrument on the Lunar Prospector orbiter appear to be feasible and would allow searches on about three mile or better scales for those areas with the highest concentration of hydrogen. In situ searches would be the most definitive but could only be made in a very small number of locations. Such sampling could be achieved by using instrumented penetrators or, ultimately, rovers to investigate the most likely sites to harbor water based on results from previous searches using a high resolution neutron spectrometer and imaging radar.

A possible suite of instruments on one or more lunar polar orbiters would be:

What other useful minerals, ores or elements may be present in the lunar soil?

Many useful materials are present in significant concentrations in the minerals present in the lunar soil and rocks. Mare basalts have high concentrations of oxygen, silicon, ion, magnesium, titanium and the lunar highlands have significant amounts of aluminum and calcium. The major issue is how to recover these materials or make use of the minerals themselves using relatively simple automated processes suitable for use on the lunar surface.

Thank you for your attention.