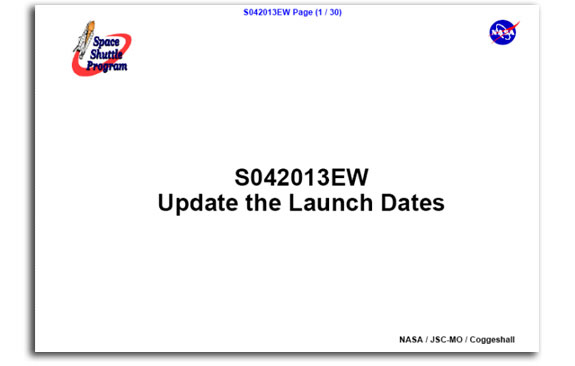 Editor's note: Wayne Hale signed this CR (Change Request) on 1 October 2004 and forwarded it to the JPRCB which met on 14 October 2004. The JPRCB said they had no authority to approve launch date changes without Space Flight Leadership Council (SFLC) concurrence or prior approval.

When this proposed schedule was presented to the SFLC in September 2004 they replied that they wanted to have the Shuttle/Space Station community assess the schedule - and then come back to the SFLC on 29 October 2004. the SFLC wants to know if this new schedule is actually capable of working - and what the associated risks are in implementing it.

In addition, work on further missions such as STS-116 and STS-117 were put on the back burner until such time as the Shuttle program's schedules begin to become a bit more real.