As it completed its first orbit of Saturn, Cassini zoomed in on the rings to catch this wondrous view of the shepherd moon Prometheus (102 kilometers, or 63 miles across) working its influence on the multi-stranded and kinked F ring.

The F ring resolves into five separate strands in this closeup view. Potato-shaped Prometheus is seen here, connected to the ringlets by a faint strand of material. Imaging scientists are not sure exactly how Prometheus is interacting with the F ring here, but they have speculated that the moon might be gravitationally pulling material away from the ring. The ringlets are disturbed in several other places. In some, discontinuities or "kinks" in the ringlets are seen; in others, gaps in the diffuse inner strands are seen. All these features appear to be due to the influence of Prometheus.

The image was taken in visible light with the narrow angle camera on Oct. 29, 2004, at a distance of about 782,000 kilometers (486,000 miles) from Prometheus and at a Sun-Prometheus-spacecraft, or phase, angle of 147 degrees. The image scale is 4.7 kilometers (2.9 miles) per pixel. The image has been magnified by a factor of two, and contrast was enhanced, to aid visibility. 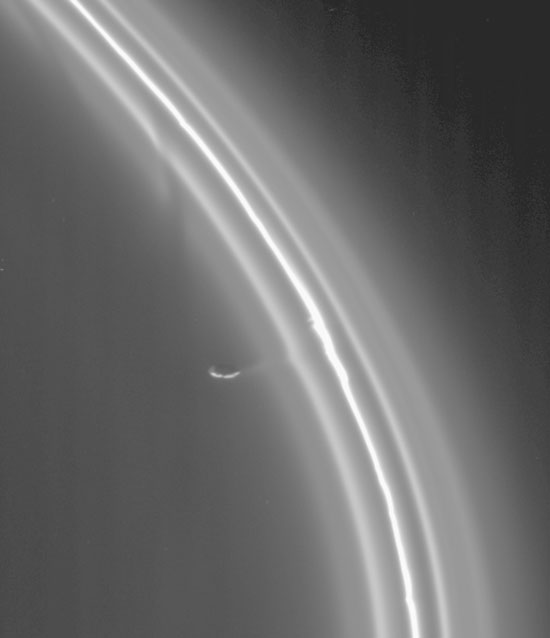 The Cassini-Huygens mission is a cooperative project of NASA, the European Space Agency and the Italian Space Agency. The Jet Propulsion Laboratory, a division of the California Institute of Technology in Pasadena, manages the Cassini-Huygens mission for NASA's Science Mission Directorate, Washington, D.C. The Cassini orbiter and its two onboard cameras were designed, developed and assembled at JPL. The imaging team is based at the Space Science Institute, Boulder, Colo.