All ISS systems continue to function nominally, except those noted previously or below. Christmas Eve -- an off-duty day aboard the ISS.

At Baikonur last night, Progress M-51/16P launched on time (5:19pm EST) with critically required food, water and other cargoes. After normal separation of the first, second and third stage, antennas and solar arrays were nominally deployed at orbit insertion (5:28pm). With that, the new cargo ship (7200 kg mass, with over 2000 kg of cargo) is on its way to rendezvous with ISS. [At orbit insertion, Progress unfolded two solar arrays, four Kurs antennas, one TORU/Rassvet-M antenna and one telemetry antenna. Later, the SSh docking probe was extended, followed at 6:56pm by a successful 6-min long self-test of the Kurs-A MCS (motion control system) including the Klest TV system, with both sets indicating readiness. Two major orbit adjustment burns were completed, DV1 (21.7 m/s) at 8:59pm and DV2 (19.3 m/s) at 9:39pm. DV3 is scheduled for tonight at 6:00pm, followed tomorrow by Progress Kurs-A activation and self-test. As Kurs-A and Kurs-P (on SM) confer and "compare notes" at ~5:28pm, Klest TV camera & floodlight are turned on at 8 km (~5:50pm) and three successive braking burns lead into flyaround mode (400 m), stationkeeping (170 m, ~6:09pm), and final approach (~6:22pm). After the two-day "chaser" flight, 16P will dock at the SM aft end tomorrow evening at ~6:31pm. Its 2.5 tons of cargo includes supplies for the ISS crew (food, batteries, office supplies, and clothes), water, critical hardware for EHS (environmental health systems), HMS (health maintenance systems) and CMS (crew medical systems), three A31p Next Generation laptops, new software CD-ROMs for the U.S. SSC (station support computer) laptops, experiment gear, propellants, oxygen, and other critically required hardware that "made" it onboard the manifest,.]

Crew wake-up this morning was at a shifted 2:30am EST, with sleep starting tonight at 6:00pm. A second shift occurs tomorrow, delaying wake-up to 5:00am and bunk time to 9:05pm.

Leroy Chiao and Salizhan Sharipov set up television connections in the Service Module (SM) for covering the docking. [With the video available on an SSC (station support computer) A31p laptop in "Zvezda", it can be routed to the US segment and thence downlinked to MCC-Houston via Ku-band and transmitted to TsUP/Moscow. The TV set-up preparations concluded with a test of the configuration, after which the A31p was deactivated, but leaving all cabling intact until after the docking.]

The crew conducted their daily 2.5-hr. physical exercise program on TVIS, RED exerciser, CEVIS cycle and the VELO cycle with bungee cord load trainer. [Salizhan's daily protocol prescribes a 1.5-hr structured set on the treadmill (today: Day 1 of a new set) and one hour on VELO.]

CDR Leroy Chiao then transferred the daily TVIS and RED exercise data files to the MEC (medical equipment computer) for downlink, as well as the daily wristband HRM (heart rate monitor) data, followed by their erasure on the HRM storage medium.

Later today, at ~4:00pm, Leroy is scheduled to have his weekly PFC (private family conference) via S-band/audio and Ku-band/NetMeeting video.

Detailed Progress unloading instructions (contents of containers, "what goes where", etc.) were uplinked to the crew by both US and Russian specialist teams.

With Science Officer Chiao's successful performance of Test #5 of the ISSI (In-Space Soldering Investigation) experiment last Wednesday (12/22), when he soldered twelve different shaped wire coupons (six L-shaped and six large looped), the ISSI payload program is now completed. [The purpose of this micro-G experiment is to study the surface tension-driven convection phenomena during soldering, as well as the microscale physics of the interfacial zone. The soldiering experiments consisted of systematically investigating a number of key solidification/fabrication parameters. A total of 84 coupon samples have been tested by the crew and will be returned on the next available return vehicle.]

Update on RPC-4 trip: The SSC-9 (A31p) laptop that was involved in the RPCM (remote power controller module)'s RPC-4 trip on 11/11 was found without fault, and the crew recovered it for use. [To exonerate it, a resistance check was performed on the laptop's cable while connected to the SSC (station support computer) system. All resistance measurements at the time of the test indicated no shorts in the circuit. The crew was given a "go" to move the SSC-9 to the location where SSC-8 was located. Further troubleshooting on the rest of the loads associated with UOP-4 (utility outlet panel 4) and the UOP itself will be performed at a later date.]

Update on TRRJ rotation anomaly: During the TRRJ (Thermal Radiator Rotary Joint) photography activity of the S1 truss radiator, the rotary joint motor was unable to turn the panel in both positive and negative directions. After some troubleshooting between its two loops, the TRRJ was successfully transitioned to nominal 0 degree position. Both TRRJ Loop A and B are now in the their nominal configurations, and the ISS is ready for 16P docking.

Update on food resupply: 16P will deliver sufficient food, both US and Russian, for 112 days (covering 67 days at a nominal consumption rate and 45 days of food at a skip cycle consumption rate of 0.8 rations/day). [These calculations assume two US entrees per day per crewmember, not including breakfast meats, appetizers (e.g., shrimp cocktail) or vegetarian entrees (e.g., tofu products). The Russian food compliment is still being worked. After 16P arrival, there are 67 days until 17P arrives (3/2/05). Skip Cycle Food will be separately located/identified such that the crew will notify the ground before use. The crew should not open these containers until all other food has been consumed. A detailed unpack plan will indicate specifically which 12 US containers should be clearly marked as skip cycle. The Russian side was asked to identify a similar quantity of Russian food to be set aside.]

No CEO targets for today. The last day for CEO target uplinks was yesterday until after the New Year. However, weather predictions are favorable for Santa sightings around the world tonight.

CEO images can be viewed at these websites:

To view the latest photos taken by the expedition 9 crew visit: 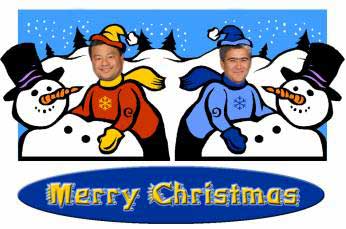 Poem uplinked to Leroy and Salizhan by Flight Control:

Twas the night before Christmas and all through the Station
The crew was still working, this is not a vacation!
Their spirits were high but their pantry was bare.
They had hopes that the Progress soon would be there,

When out of the window there emerged a bright light
It was a good Progress launch, what a beautiful sight!

The ISS crew then went straight to their beds
While visions of kung pao chicken danced in their heads.
They slept with the knowledge that teams here on the ground
Would be watching the Progress while it soared ISS-bound.

They'll awake for the docking and that exciting small bump --
Then shout "Merry Christmas to All, we made it over that hump!"

A Merry Christmas and great Holiday to everyone!