Less than 20 minutes after Cassini's close approach to Titan on March 31, 2005, its cameras captured this view of Saturn through Titan's upper atmosphere. The northern part of Saturn's disk can be seen at the upper left; dark horizontal lines are shadows cast upon Saturn by its rings. Below this level, Titan's atmosphere is thick enough to obscure Saturn.

The diffuse bright regions of the image (below Saturn and at the right) are light being scattered by haze in the upper reaches of Titan's atmosphere.

This image is scientifically useful because it shows properties both of how Titan's haze transmits light (from the attenuation of light from Saturn) and of how the haze reflects light (from its brightness next to Saturn).

The image was taken in visible light with the Cassini spacecraft wide-angle camera at a distance of 7,980 kilometers (4,960 miles) from Titan, when Saturn was about 1.3 million kilometers (808,000 miles) away. Image scale is about 320 meters (1,050 feet) per pixel on Titan. 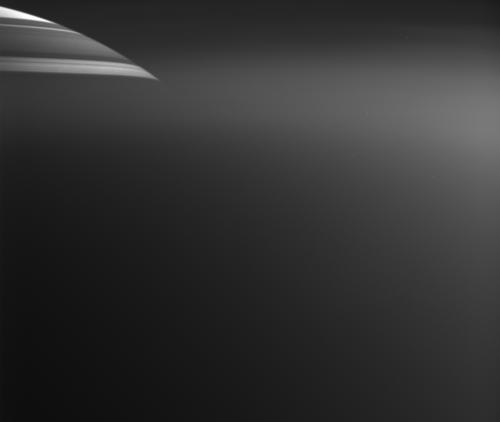