With this false-color view, Cassini presents the closest look yet at Saturn's small moon Epimetheus (epp-ee-MEE-thee-uss).

The color of Epimetheus in this view appears to vary in a non-uniform way across the different facets of the moon's irregular surface. Usually, color differences among planetary terrains identify regional variations in the chemical composition of surface materials. However, surface color variations can also be caused by wavelength-dependent differences in the way a particular material reflects light at different lighting angles. The color variation in this false-color view suggests such "photometric effects" because the surface appears to have a more bluish cast in areas where sunlight strikes the surface at greater angles.

This false color view combines images obtained using filters sensitive to ultraviolet, polarized green and infrared light. The images were taken at a Sun-Epimetheus-spacecraft, or phase, angle of 115 degrees, thus part of the moon is in shadow to the right. This view shows an area seen only very obliquely by NASA's Voyager spacecraft. The scene has been rotated so that north on Epimetheus is up. 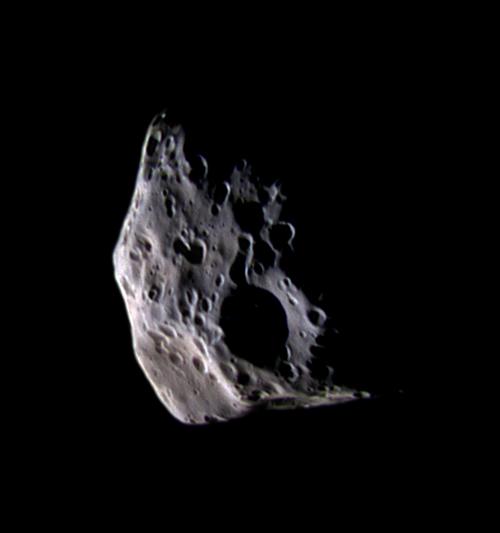 The slightly reddish feature in the lower left is a crater named Pollux. The large crater just below center is Hilairea, which has a diameter of about 33 kilometers (21 miles). At 116 kilometers (72 miles) across, Epimetheus is slightly smaller than its companion moon, Janus (181 kilometers, or 113 miles across), which orbits at essentially the same distance from Saturn.

The images for this color composite were obtained with the Cassini spacecraft narrow-angle camera on March 30, 2005, at a distance of approximately 74,600 kilometers (46,350 miles) from Epimetheus. Resolution in the original images was about 450 meters (1,480 feet) per pixel. This view has been magnified by a factor of two to aid visibility.