The rock in the center foreground of this picture is suspected of being an iron meteorite. The panoramic camera on NASA's Mars Exploration Rover Spirit took this image during the rover's 809th Martian day (April 12, 2006). The foreground rock, informally named "Allan Hills," and a similar rock called "Zhong Shan," just out of the field of view to the left, have a smoother texture and lighter tone than other rocks in the area.

The texture and glossiness of this pair reminded some members of the rover science team of a rock called "Heat Shield Rock," which was observed by Opportunity, Spirit's twin, in the Meridiani region of Mars more than a year ago. Examination of that rock's composition confirmed it to be an iron meteorite (see http://photojournal.jpl.nasa.gov/catalog/PIA07269.) 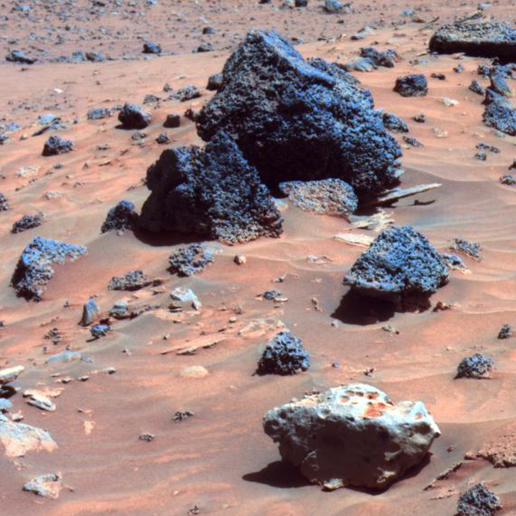 Observations of Allan Hills and Zhong Shan with Spirit's miniature thermal emission spectrometer indicate that they are very reflective, like Heat Shield Rock. They are the first likely meteorites found by Spirit.

Rocks in the vicinity of Spirit's winter station are being assigned informal names honoring Antarctic research stations. Zhong Shan is an Antarctic base established by China in 1989. Allan Hills is a site where meteorites are frequently collected because they are relatively easy to see as dark rocks on the bright Antarctic ice. The most famous Allan Hills meteorite from Antarctica actually came from Mars and landed on Earth. If the Zhong Chang and Allan Hills rocks seen by Spirit do turn out to be iron-rich meteorites, they may have originated from an asteroid and landed on Mars.

This view is a false-color rendering to emphasize differences among rock and soil materials. It combines images taken through the panoramic camera's 753-nanometer, 535-nanometer, and 432-nanometer filters. It is a portion of an image previously released (see PIA08094).

Medium resolution version of this image

High resolution version of this image