NASA KSC RFI: Supporting an Environmental Assessment of Commercial and Other Uses of the Shuttle Landing Facility

NASA is seeking information from prospective commercial and other non-NASA users of the Shuttle Landing Facility (SLF) at the Kennedy Space Center (KSC) to support an ongoing Environmental Assessment (EA) of commercial suborbital and orbital spaceflight; support and special purpose aviation; and other compatible uses. See attached documents for detail.

SUPPORTING AN ENVIRONMENTAL ASSESSMENT OF COMMERCIAL SPACEFLIGHT, AVIATION, AND OTHER USES OF THE SHUTTLE LANDING FACILITY

NASA is seeking information from prospective commercial and other non-NASA users of the Shuttle Landing Facility (SLF) at the Kennedy Space Center (KSC) to support an ongoing Environmental Assessment (EA) of commercial suborbital and orbital spaceflight; support and special purpose aviation; and other compatible uses.

NASA initiated the EA to evaluate potential environmental impacts of expanded use of the SLF by commercial and other non-NASA organizations for a variety of contemplated flight activities and related improvements to the SLF support infrastructure. The EA is required to comply with the National Environmental Policy Act (NEPA) of 1969. NASA anticipates completing the EA and publishing its findings by mid 2007.

Under the proposed action, NASA will operate the SLF in a manner to encourage and facilitate expanded utilization of the facility by non-NASA users, and permit the SLF to be used for commercial or other non-NASA activities to include:

The proposed action will allow the available capacity of the SLF to be used, consistent with NASA needs, by users from other sectors as directed by the President's National Space Transportation Policy and related Congressional direction.

Expanding access to and use of the SLF as NASA transitions to implementation of the Vision for Space Exploration provides an opportunity for improved utilization of a unique national asset, and the potential for significantly expanding private sector participation in the exploration and development of space.

It is anticipated that the requirement for Space Shuttle Orbiter landings, and related mission support, on the SLF will not extend beyond 2010. However, agency requirements for other aircraft operations, spacecraft and flight vehicle operations, and related support activities will extend into the foreseeable future to support the Constellation Program.

The information being sought by NASA from prospective commercial and other non-NASA users of the SLF is limited to technical and operational data that will assist NASA in considering and defining:

Consistent with its July 8, 2005 RFI soliciting interest from potential users of the SLF, NASA continues to preclude the following types of uses at this time: corporate aircraft flights or conventional commercial passenger aircraft charter flights; general aviation uses; ordnance testing; and any use that would have the effect of precluding reasonable access by commercial users for the types of spaceflight or special purpose aviation activities outlined above. NASA will not assess the environmental impacts of these precluded uses.

How to Respond to NASA's Request

Responses to this RFI are requested no later than December 1, 2006 to ensure consideration in NASA's preparation of the EA. A Draft EA is expected to be published for industry and public comment early in 2007.

Prospective commercial launch operators planning to employ horizontal launch or recovery systems in their architecture, and considering the SLF as a potential development or operational site, are asked to review preliminary EA approaches outlined in this RFI and provide comments, additional relevant technical data outlined above, and any recommendations for characterizing the generic vehicle types and operating parameters that should be assessed for impacts.

Prospective aircraft operators employing systems that exist, are under development, or may reasonably become available for use during the EA study period, and are planned for uses that NASA has not precluded from consideration at this time, should also review and comment on preliminary EA approaches outlined in this RFI and provide the technical data requested above.

Any users proposing non-spaceflight, non-aviation uses (such as research, testing, or engineering applications) must describe how these activities would be compatible with the other flight uses under study and identify any hazards or potential environmental impacts that could be associated with the activity.

NASA is willing to discuss informally with potential responders this request and how provided information will be used.

Inquiries and/or responses should be directed to:

NASA's initial proposed approach to alternatives is to evaluate the following:

1. Permit commercial and non-NASA SLF use to include suborbital and orbital launches, and vehicle returns and/or re-entries; use by support and/or special purpose aviation users; other compatible uses; and expansion of spaceport/airfield support facilities at the SLF midfield site to facilitate such operations.

2. Permit commercial and non-NASA SLF use to include suborbital and orbital launches, and vehicle returns and/or re-entries; use by support and/or special purpose aviation users; other compatible uses; and expansion of spaceport/airfield support facilities at the existing SLF operations site to improve support of such operations.

3. Permit commercial and non-NASA SLF use to include suborbital and orbital launches, and vehicle returns and/or re-entries; use by support and/or special purpose aviation users; and other compatible uses, without any further expansion of existing ground support facilities and infrastructure.

Under this alternative, there would be no significant construction to add or alter existing infrastructure at the SLF, though some existing facilities might be upgraded or modified to improve functionality and support capability. Temporary and mobile capabilities could be used to gain modest improvements in capacity.

4. Do not expand SLF use beyond the current NASA Space Shuttle Program and other existing agency and commercial uses, and do not expand existing SLF ground support facilities beyond current capacity.

Under this alternative, there would be no additional uses permitted beyond the current NASA use for the Space Shuttle and related or other agency mission support requirements, currently approved commercial use, and the infrequent, incidental, non-NASA use required for unforeseen, non-recurring circumstances.

Based on some preliminary discussions with industry and others, alternative site plans showing the potential footprint of facilities improvements have been prepared by NASA for the purpose of assessing the impacts of expanded ground infrastructure contemplated in the first two alternatives described above. These site maps are provided separately for industry's review and comment in response to this RFI.

Preliminary Vehicle Concepts to be Evaluated for all Alternatives

For purposes of this EA, NASA will develop and evaluate vehicle concepts representative of the systems anticipated to be employed in the SLF uses anticipated.

For horizontal launches and returns/reentries, these will include the launch vehicle and reentry vehicle concepts as described and assessed in the FAA's final programmatic EIS for Horizontal Launch and Reentry of Reentry Vehicles published in December 2005.

NASA also anticipates assessing the landing on the SLF of so-called "fly back boosters" used as the first stage in vertically launched suborbital or orbital systems.

NASA will describe and assess several aircraft categories representative of the existing or future systems anticipated to be employed in the SLF uses anticipated.

NASA will use industry's response to this RFI to ensure it has been as inclusive as practical in considering potential systems and uses for assessment. It may not be feasible for NASA to consider all potential systems, or uses, identified by industry and therefore NASA will focus this effort on the most likely portfolio of space and aviation systems that, in the agency's judgment, could reasonably be permitted to use the SLF during the study period.

Additional Information Regarding Commercial and Non-NASA Use of the SLF

NASA reserves the right to determine what uses are appropriate for the SLF in light of agency requirements, and under what terms and conditions it will consider permitting recurring use of the SLF by commercial and non-NASA operators.

NASA also reserves the right to determine whether specified requirements can be reasonably included in the scope of the EA and reflected in the ultimate description of alternatives that are fully assessed.

Individual commercial launch operators proposing to conduct suborbital or orbital launches, or reentries, at the SLF must obtain a license from the FAA Office of Commercial Space Transportation and may have to provide specific vehicle information for further environmental consideration during that licensing process.

NASA intends the EA it is preparing to offer site specific analysis for generic vehicle types and operations contemplated to be performed at the SLF. NASA has requested the FAA serve as a cooperating agency for the NEPA process. If NASA decides to use an independent operator or authority to manage and operate the SLF for some or all of the uses contemplated in the EA, then that operator may be required to obtain a launch site operator's license from the FAA.

NASA is performing the EA to support timely decisions on implementing expanded SLF access and enabling the growth of commercial space activities consistent with national policy. NASA does not have funding to design or construct the SLF infrastructure improvements that may be permitted as a result of this EA. Such improvements, should NASA authorize the activities that require them, will need to be funded by the users or others.

Other Sources of Information Supporting the EA

NASA intends to use the technical descriptions and data published in the Federal Aviation Administration's (FAA) Final Programmatic Environmental Impact Statement for Horizontal Launch and Reentry of Reentry Vehicles, published in December 2005. The SLF EA will tier off the FAA's programmatic EIS to the extent possible in assessing site specific impacts. NASA will augment the FAA's technical information and expand to other uses with data already received from some industry discussions, other publicly available sources, and responses to this RFI.

As part of NASA's request to industry for information supporting an environmental assessment of commercial spaceflight, aviation, and other uses of the SLF, NASA welcomes comments from industry regarding the requirements that may influence the need for expanded ground infrastructure for proposed future uses.

On both site concepts, new infrastructure footprints are depicted in red, while existing facilities are in black. A taxiway connecting the SLF midfield with the existing SLF operations area may be evaluated, or may be deemed to be beyond the scope and timeframe (2008-2018) of the current study.

The site concept labeled Option 1 depicts the footprint for the alternative NASA believes will become the preferred alternative, and that is for expansion of spaceport/airfield support facilities at the SLF midfield site to facilitate such operations.

The site concept labeled Option 2 depicts the footprint for the alternative that envisions expansion of spaceport/airfield support facilities at the existing SLF operations site, located near the south end of the runway.

Comments to these site concepts should be included with any additional technical data provided in response to NASA's request for information. 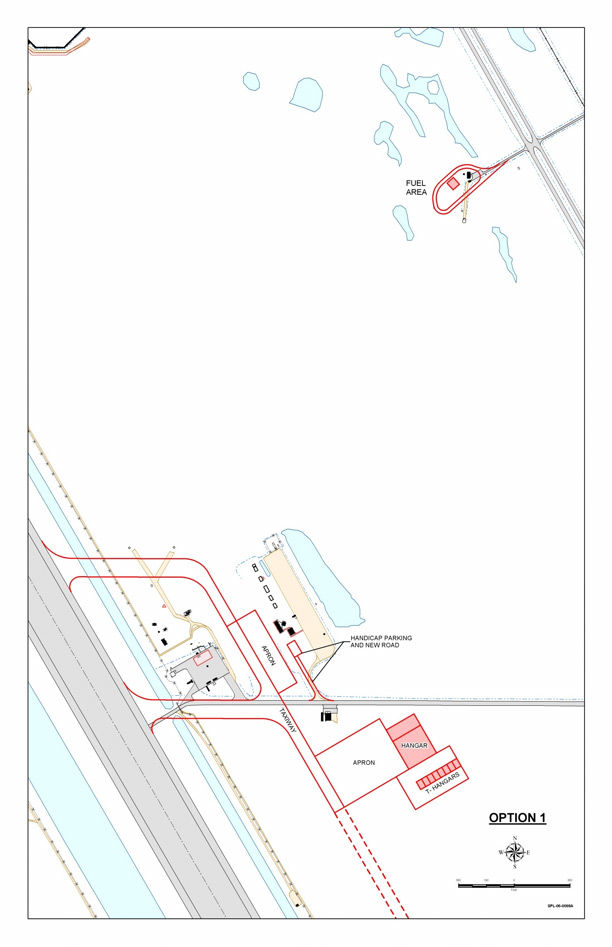 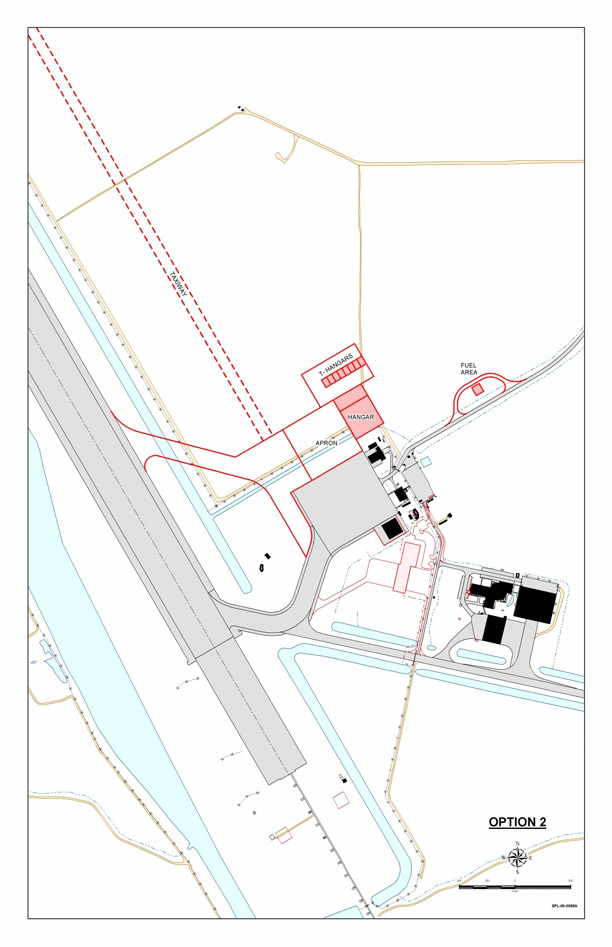