Don Pettit's Space Chronicles on Ice: Deployment to the Ice

Tomorrow, December 8th, we deploy to the ice fields in the Grosvenor Mountains via a C-130 military cargo plane. If you consider that we are living across the international date line, thus being one day ahead of the United States, we will deploy about the same time as the first launch attempt for STS-116 to the International Space Station. I have friends and classmates aboard and want to follow along, but alas, we will be busy with our own mission work (and out of range from the NASA TV coverage). Perhaps after the set-up-the-camp struggle, we can make a quick call via satellite phone to Mission Control and find out the launch status.

Apparently, at the Grosvenor area there is a sufficiently long and flat section of natural ice for the rather largish C-130 to use as an improvised runway. Originally, I thought that we would first fly to the South Pole via C-130 which has a prepared runway and then fly to the Grosvenor Mountain area via Twin Otter, a much smaller plane that does not consume runways with the same thirst. By flying directly to our search area in a C-130, we can get everything deployed in two trips, a real savings over the number of loads if delivered by the diminutive Twin Otter. Our total mass of gear is over 8,000 kilograms (18,000 pounds) for our party of eight. This is well within the load limit of one C-130 trip, however, they wanted a light first load to familiarize themselves with the natural ice-flat runway so it was decided to make two trips for safety reasons. If your pound of flesh is aboard this flying cargo machine, it is difficult to object to such reasoning. 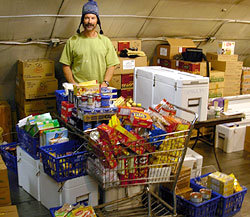 The weather forecast is iffy. High winds and possible low cloud ceilings are forecast, not a good thing if you are landing 400 kilometers (240 miles) from the South Pole on an uncertain natural stretch of ice. We may be drinking coffee in the McMurdo cafeteria until this front blows through.

I am constantly reminded of the similarities between Antarctic and space explorations. There are the hectic pre-mission days where preparations seem to suck the hours into some cosmic black hole, leaving everyone to ponder where the time went. Then there is the never ending issue with stowage of gear. When humans go off into a harsh frontier, a place where we were not intrinsically meant to be, the only way you can survive is to bring equipment that provides you with the necessities of life. You must stow all this gear away in your vehicle, and know where everything is packed so you can find it. Seemingly simple tasks that in practice are always more difficult than theory, and always seem to gobble time by the hour. And then there is the ever present weather, whether for going into space or goings on Earth that forces one to sit back and sip coffee. Perhaps this is a gift from Mother Nature, an imposed rest break for us humans driven by self-imposed schedules.