Status Report From: House Committee on Science, Space, and Technology
Posted: Friday, May 18, 2007

Hearing: Building and maintaining a healthy and strong NASA workforce

Thank you, Chairman Udall and Ranking Member Calvert, for providing the International Federation of Professional and Technical Engineers, NASA's largest Union, this opportunity to present our perspective on the workforce challenges facing NASA today. It is a privilege and honor for me to speak for IFPTE and for the thousands of NASA employees we represent.

IFPTE's primary interest in testifying today is to provide advocacy for maintaining the technical excellence and independence of NASA's civil service workforce that has served the Agency so well for decades. However, our interest extends more broadly to a deep commitment to NASA's success not only in the near term but, more importantly, in the long term, consistent with the true spirit of the Vision for Space Exploration (VSE). NASA's rank-and-file employees are not only the heart and soul of the agency, but also provide much of its brain power. They are hard working and dedicated to mission success, but see this success as including all of NASA's critical missions. Indeed, many of our nation's best and brightest came to NASA primarily to be part of endeavors greater and nobler than more lucrative pursuits available to them in the private sector. They came to discover and to explore so that America can lead mankind in aerospace science, engineering, and exploration. That dream is in jeopardy today, not because of a failure of technical competence or innovation, but because of a failure of political will.

NASA is not facing a workforce crisis; it is facing a fiscal crisis. The President's Vision outlines a bold and ambitious set of milestones for NASA, ultimately leading to permanent human presence on the moon and a safe manned mission to Mars. Yet unfortunately, the White House has thus far been unwilling to propose a bold and ambitious NASA budget to match. The misguided policy decision to make the VSE an unfunded mandate is the driving force behind all of NASA's current woes. IFPTE calls on Congress to redirect this policy and to fund NASA at the levels Authorized less than two years ago with overwhelming bipartisan support. This course of action is essential for enabling NASA's success, for maintaining America's prestige and leadership in aerospace R&D, and ultimately for safeguarding our national security.

" ... Congress anticipated that the Federal Aviation Administration, as the operator of our nation's ATM system, and the National Aeronautics and Space Administration, as our nation's leading aeronautics R&D organization, would continue to work collaboratively as they have for more than forty years: NASA researching and developing long-lead, high risk technologies; FAA adapting their research products to incorporate them into the national airspace system. ... The JPDO recognized NASA's expertise early on by selecting them to lead the 'Agile Airspace' integrated product team ... . In the last eighteen months, however, and subsequent to the creation of the JPDO, NASA's aeronautics R&D program has undergone a major reorganization ... I remain concerned that so early in this grand endeavor now known as NextGen, one of the two key partners is changing the rules of the game, and it's happening at a time when R&D roadmaps are being finalized, and spending for developing and integrating new technologies is about to ramp up. I would strongly prefer that NASA's Airspace Management program continue to advance promising technologies to a high level ... It is my sincere hope that NASA's actions don't hinder JPDO's efforts to develop technologies upon which NextGen is reliant."

IFPTE shares this concern and urges Congress to properly fund NASA's Aeronautics R&D mission, which will not only address this and other critical national needs, but will also greatly reduce the workforce instability at the Agency.

"I cannot grow the Agency by bringing in even all-stars right now that I want to bring in, unless and until folks like us who, as you said, are getting older, until and unless these folks retire."

IFPTE applauds the National Research Council (NRC) for its thoughtful report and recommendations on NASA's workforce planning. The report properly recognizes the symbiotic relationship between NASA's in-house scientists and their academic colleagues, as well as the immediate need to engage aggressively in the education, hands- on training, and recruitment of the next generation of NASA employees. We fully endorse their key recommendations.

IFPTE is disappointed with the National Association of Public Administration (NAPA) report and strongly objects to the fact that it blindly accepts the Administration's assertions about NASA's fiscal and programmatic constraints and uses them to bolster their argument that some dramatic workforce realignment with a significant reduction of civil service component is somehow required for the success of the VSE. This simply is not the case and indeed, we believe the converse is true. We also strongly object to their recommendations that NASA management be given new authority for streamlined Reductions-In-Force (RIFs) and for termination based on retirement eligibility.

The above statement that NASA does not now need and is not going to need these "legacy" competencies to meet its future missions in Science, Aeronautics, and Human Spaceflight is absurd. Yet, assertions like this are used throughout the report to justify a persistent call to target CS employees for layoffs. Indeed, the NRC report correctly points that NASA desperately needs to recruit more talent in the areas of program/project management and in systems engineering (and talented Aeronautics program/project managers and systems engineers can clearly be quickly cross-trained to support spaceflight programs). Furthermore, the NAPA report's lack of objectivity is revealed as it repeatedly uses the term "reality" to describe unchallenged assertions by NASA management, while they refer to Union statements as "views".

IFPTE continues to support the "ten healthy Centers" philosophy put forward by Dr. Griffin; we reject criticism of his plan within the NAPA report. Unfortunately, the implementation has been spotty. In particular, as noted in the NAPA report (p. 57), current policies have severely stressed NASA's research centers. The solution to this problem cannot be to convert them into mini-operational centers or to subject them to a BRAC-like process. Rather, the Administration must recognize that revitalized R&D at NASA's research centers is crucial for the success of the VSE and NASA's Science and Aeronautics missions. NASA's research centers and their academic partners must be provided with the resources needed for them to continue to make their contributions to NASA's longer-term missions. 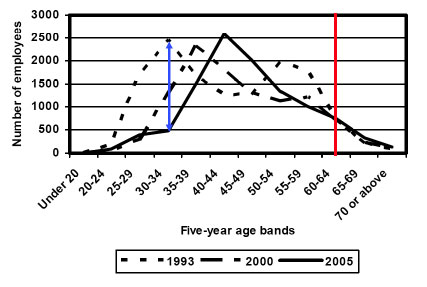 The key problem and the misguided nature of the current management approach are readily apparent in Fig. 2-2 of the NRC report (see above).

NASA's peculiar version of matrix management, in which programs wield all budgetary power and line management is effectively impotent, is harming morale and productivity at most centers among both the rank-and-file and line managers.

When NASA claimed to convert over to "full-cost accounting" in FY04, it actually converted over to

"Term employment may be preferable to permanent employment options given the great deal of budget and programmatic uncertainty."

This statement openly advocates for the improper use of term positions to compensate for political instability at the Agency. Every year, NASA's budget and programs are uncertain, so this cannot be used as a criterion for determining whether a position is best filled by a permanent or term hire. That decision should be based on the position's skill requirements and the long vs. short term need for the specific competency being hired.

IFPTE reiterates its prior testimony stating that NASA benefits greatly from the synergy generated by its combined federal and private-sector workforce. However, we also believe that NASA has achieved the minimum healthy balance between its current 18,020 civil servants on duty (16,299 full-time permanent) and its dedicated contractor workforce of around 40,000. The latest CS number represents a nearly a two-fold change from the 35,860 civil servants on board in FY1967, the last time NASA was working to send Americans to the moon and back safely. Any further decrease in the civil-service component would appear unwarranted and would put mission success at increased risk.

IFPTE is concerned that neither the NRC nor the NAPA report emphasized the many important reasons for maintaining a strong civil-service component to NASA's workforce especially when facing budgetary and schedule pressures. A few of these reasons are:

Prior to Challenger, Shuttle Program structure had hindered information flows, leading the Rogers Commission to conclude that critical information about technical problems was not conveyed effectively through the hierarchy. The Space Shuttle Program had altered its structure by outsourcing to contractors, which added to communication problems. The Commission recommended many changes to remedy these problems, and NASA made many of them. However, the Board found that those post-Challenger changes were undone over time by management actions. NASA administrators, reacting to government pressures, transferred more functions and responsibilities to the private sector. The change was cost-efficient, but personnel cuts reduced oversight of contractors at the same time that the agency's dependence upon contractor engineering judgment increased.

The Agency also needs to engage more scientists, engineers, and technicians, and fewer managers, deputy managers, associate managers, and assistant managers. NASA's dedicated technical workforce at all of its centers, both civil servant and contractor, stands ready, willing, and able to support all of NASA's missions and there is more than enough technical work to go around. NASA headquarters needs to reduce the load of

self-generated program-reporting busy work that it dumps on its front-line managers, which then reduces real productivity and drives the "need" for excess management.

Administrator Griffin deserves considerable praise for realizing that all of NASA Centers should share in the work opportunities (and responsibilities) provided by the Constellation program, according to their capabilities and facilities. This idea, however, has been difficult to implement fully and is not a long-term solution.

Indeed, when Constellation work-packages have been transferred to other centers, JSC has only minimally complied by transferring the CS Full Time Equivalent (FTE) portion of the funds, while retaining the procurement dollars and contractor work-year equivalent (WYE) funds, thereby making it impossible for other centers to match JSC's apparent productivity. JSC continues to prefer hiring within their local JSC contractor teams and to resist transferring the full budget associated with Constellation work-packages to CS- contractor-academic teams at other centers.

IFPTE supports NASA's efforts to obtain enhanced voluntary buy-out authority. However, we strongly opposed the effort to obtain legislation to enhance their authority

to convert permanent positions to term positions as this would only exacerbate the current abuse of term hiring.

In order for NASA to move forward towards reinvigorating its workforce to better support all of its missions, IFPTE offers the following recommendations:

1. Congress should fund NASA as close to the authorized level as possible and prohibit executive transfer authority.

2. Congress should preserve and protect the technical integrity and independence of NASA's civil-service workforce.

3. NASA management should provide visible and sustained stability for its current workforce to support the inspiration then recruitment of its future workforce.

7. IFPTE strongly opposes any new authority to facilitate the conversion of permanent positions to term positions.

In conclusion, IFPTE is encouraged by the recent effort to distribute Constellation work more fairly and intelligently across the centers, and is very grateful for the bi-partisan Congressional rescue that protected NASA's workforce from the Administration's reckless RIF plan. We must now turn from the era of workforce damage control to the more positive task of re-building NASA's future multi-sector workforce. We hope that the Subcommittee will seriously consider our recommendations above, as well as those of the NRC panel.

Once again, Chairman Udall and Ranking Member Calvert, IFPTE thanks you very much for the opportunity to bring these important issues to the attention of the Subcommittee.