The photos here were taken yesterday (satellite receiver) and last week (aerial of the CSA camp). More when time permits. I have to go hit the road via snowmobile to get back to the McGill High Arctic Research Station (MARS) which is where we are staying. It is not far, but it is a bit cool right now -25C - which for this time of year is not too bad.

MARS is located on Central Axel Heiberg Island in the Canadian High Arctic.

This is all a part of our research with support from both CSA and NASA Astrobiology, McGill University, and the SETI Institute.

The CSA Canadian Analogue Research Network (CARN) is providing most all of the support including the satellite system, bandwidth etc.

We hope to conduct a joint educational outreach activity from here in July with four Canadian teachers and two US teachers. Chris McKay (NASA ARC) and Spaceward Bound are involved along with Wayne Pollard and CSA providing support. 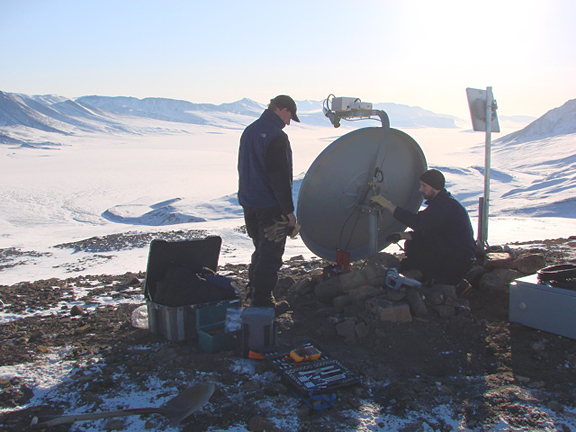 Dale Andersen (L) and Telesat engineer Jon Birchmore (R) working on a 1.2 meter satellite dish used for communications between MARS and the rest of the world. The dish is located high above base camp. The dish is connected by a WiFi point-to-point link (antenna to the right of the dish) to the CSA CARN site hut that Wayne Pollard, Miles Ecclestone and Andersen put up last year. [Photo credit: Dale Andersen] 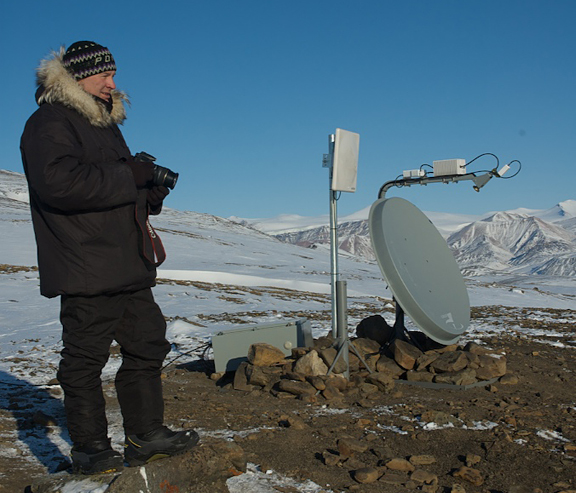