Memorial for Astronauts and Cosmonauts Atop Mt. Everest

These two photos were taken of Scott Parazynski's good friend and climbing partner Adam Janikowski on the summit of Mt. Everest. Adam is shown posing with memorial banners for cosmonauts and astronauts who died during their missions (which were left at the summit) and Explorers Club Flag #114 (which will be returned to the Explorers Club along with a report). 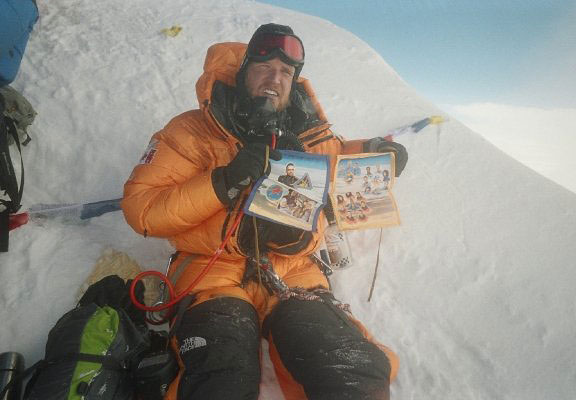 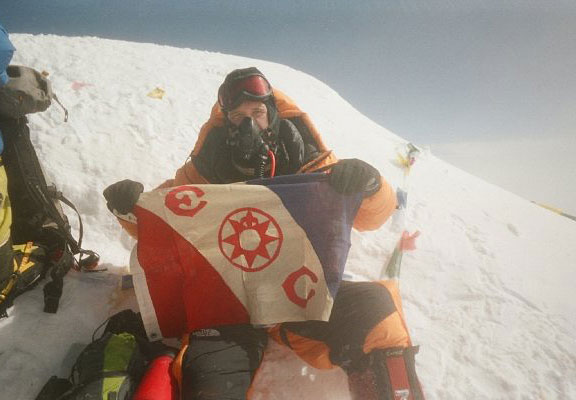 "When it became apparent the summit wasn't in the cards for me, Kami and two other Sherpa friends divvied up my belongings to bring back down to EBC --- it was a challenge enough coming down the fixed lines of the Lhotse face with just my own body weight. Somehow I did have the presence of mind to remember my "summit bling," a medium-sized Ziploc bag with small flags, patches and photos I'd intended to pull out once I topped out on the mountain.

I entrusted this bag with my good friend Adam, with instructions to do his best to photograph the items on the summit, understanding that his time would be extremely limited and he might not have a chance to do much more than tag the summit and run down. There was one special item that had highest priority, however, and thankfully Adam did the honors of not only photographing a special space explorers tribute on the summit, he tied off the two specially prepared "Tibetan prayer flags" on the summit itself.

When preparing for this expedition I reflected on the explorers who had inspired me the most, specifically space explorers who had paid the ultimate price in the line of their duty, and upon whose shoulders we stand today. I could think of no better way to honor them than on top of the world, where the sun, wind and snow would ultimately carry the prayer flags skyward. I know that two small flags bearing the photographs and mission logos of Apollo 1, Challenger, Columbia, Soyuz 1 and Soyuz 11 now fly on the summit, and that makes me smile..."

Astronaut Scott Parazynski Update 22 May 2008: Summit so close, yet so far..., OnOrbit.com

Astronaut Scott Parazynski: Many Small Steps to the Summit of Mt. Everest, OnOrbit.com