G'day again. It seems that the pics I'm sending are arriving in e-space with some reliability, so here's a few more from Sunday's climb up Ballyhoo.

First you will see Corrie climbing up a nice grassy slope. This was taken near the start of the trip - you can tell because Corrie is still smiling. (Today she is still hobbling around with sore legs two days after the event. A previously undiscovered form of altitude sickness perhaps??).

And then there's a view of Ballyhoo summit, with a very benign looking Bering Sea in the background. The Bering doesn't seem to have any real horizon. Just a merging of two different hazy shades of bluey-grey in a vaguely horizontal arrangement. I'm sure the earth is more steeply curve up here. It felt like we could have seen the signpost marking the north pole if only the day had been a little clearer.

And finally, a pic of some of the old WW2 ruins out on the headland. Like the ocean, it all seemed very benign and peaceful when we were wandering through, although I'm sure it was anything but that at the time. I don't even want to imagine how bitter the conditions were in winter. Nasty stuff. 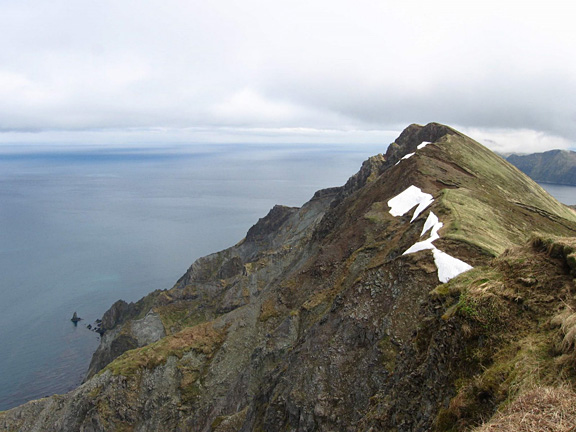 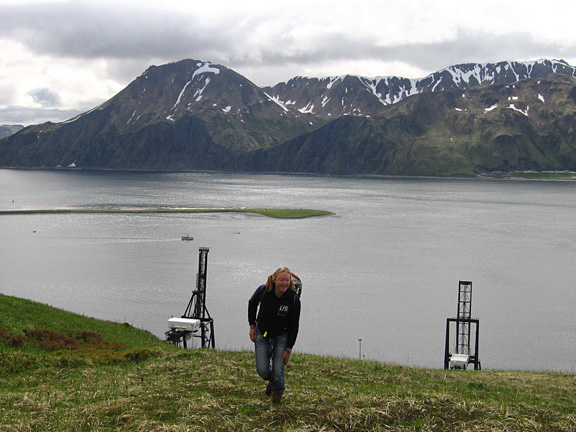 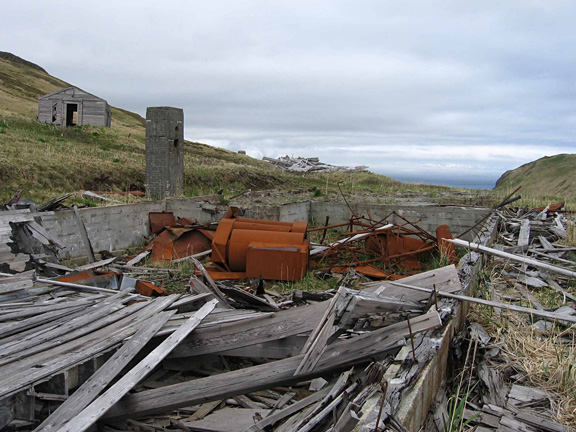 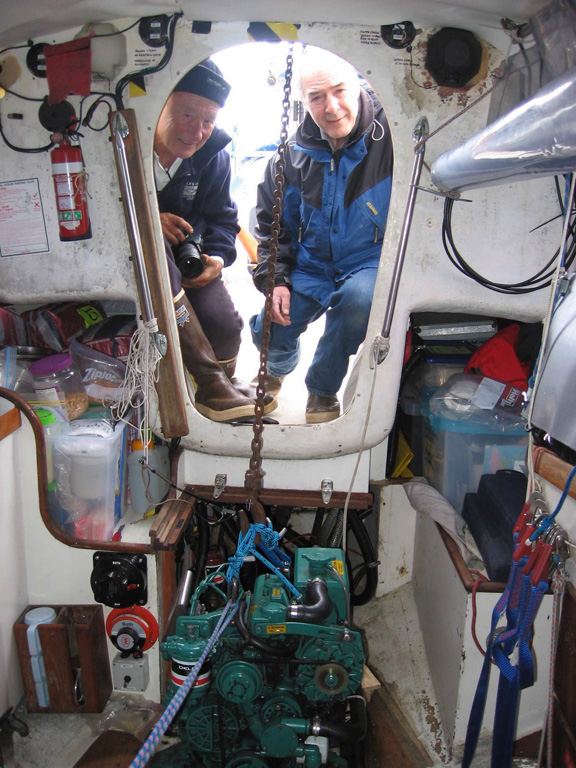 Alex and the legendry Dave Boisseau peering through Berri's companionway at the engine suspend and chocked into workable position in the middle of the cabin floor. 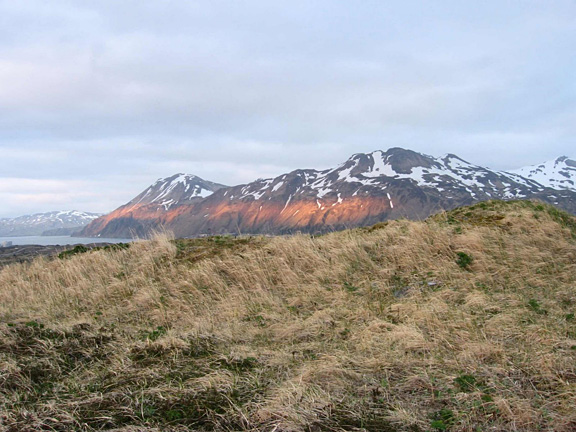 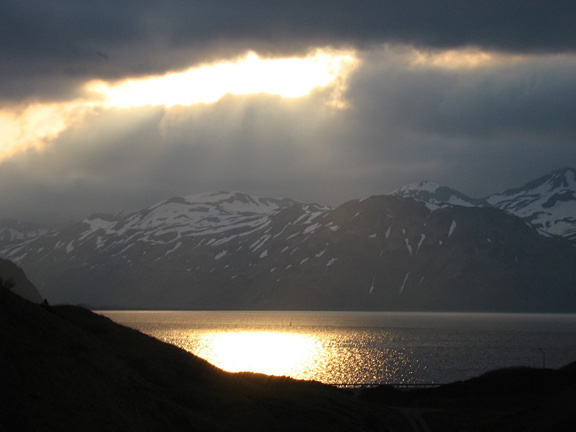 So here they are Jack - sunset pics as promised!!

Lots of pics arrived and to save time I've put some of them in a separate gallery, which you can view by clicking on 'New Pics' on the home page. The gallery opens in a separate window. so you can close it when you want to go back to the site. Best, Speedy.

Imagine if you will that you have evolved to live and breathe in an atmosphere of tomato sauce and bayleaves. That your home is in a covered bowl of fettucine napolitana. That you live outside it for a lot of the day in an alien environment that covers you in muddy sand and grot. That when you get home at night, it's raining. You have to climb on to the rim of the bowl, shed your party gear plus about a kilo of S & G and get self and PG into bowl proper leaving as much S & G on the rim as possible. Then it starts to get difficult - remove doorway, get head and torso under lid over bowl and then one leg across first strands of fetticine, about a 3 foot drop into bowl, so lots of upper body tension as you hang off a handle under the lid, ease down into bowl avoiding chunks of capsicum, disentangle appendages from more fett., balance precariously while negotiating second leg between tomato and onion, transfer vital goodies, weighing about as much as a small elephant - laptop & camera in back-pack, phone etc - across arms length distance and more fett. - fall face first - recover - remove boots one by one, reach across for interior Beijing slippers, balance precariously while wriggling feet in turn into slippers, replace covering and rain guard over entrance, place first leg across more fett and around capsicum across bowl, balance precariously while transferring backpack etc across and around strands - fall face first - reach small space between strands and chunks - remove outer clothing and collapse into bunk. Remember that you have forgotten to clean teeth - reverse collapse....etc.

MJC - I spent about 6 months in Cooktown back in the '60s and climbed the hill Cook climbed to try to see a way through the reef after careening Endeavour. Without looking at chart, I think Point Barrow is around 71N so we have a chance to emulate the numbers, but certainly not the achievement.

Today, I will do the tomato sauce routine again with the gearbox and try to hang it off the back of the donk. If that works, we'll try to put the whole shebang back on its mounts and then its back to rib damage while I connect it all up again. Readjust all cables and test gear function with engine stopped. Iff that works, one more check to make sure it's all there, then bleed, prime, take heart in mouth and turn the key. That is probably at least 48 hours away.

The weather looks awful for about a week so there is no immediate need to push - time to take it slowly and get it right.

Bloody awful day but we got the gearbox and I've converted it to Berri config. Grey thick sandy mud and I've ridden about 40 k in it - I think my new Henri pants have been sandpaperd to total uselessness - SPBF - I'm sweaty, totally knackered but happy we seem to be a step forward. Dave rang to say gbox arrived so I rode out there again to check it - was not intending to do any more so did not take backpack with notebook, phone numbers, laptop etc.

Sitting in Dave's office and security guy arrives with mobile - Fishing boat skipper trying to call Dave to say that he had received email from RCC Australia (AMSA) saying they had rec'd an emergency call from him. He unable to communicate by email only satphone. I offered to call AMSA as I know most of the people, but no backpack so did not have number immediately handy and things conspired and by the time Dave was ready, the Harbourmaster was on the phone saying plane launched from Kodiak etc....Anyway, all eventually sorted - Fishing boat's SatC defective - I suggested better to turn it off until fixed. Then spent the next 2 hours converting gearbox in Dave's office and conference room. Tomorrow is another day. A Consultation is called for then I'm going to crawl back into Berri, trying to leave mud and sand outside, and collapse.