In Situ Measurements of Atmospheric Methane at Lake Untersee, Antarctica

Methane (CH4) is an important greenhouse gas in the Earth's atmosphere, accounting for approximately 20% of the observed greenhouse effect. With an atmospheric lifetime of about ten years, methane levels have increased about 150% since pre-industrial times. It is increasingly important to monitor levels of major greenhouse gases in Earth's atmopshere, including methane.

While conducting research in a remote region of Antarctica (Lake Untersee, -71.34°, 13.47°) [Google Earth placemark] we monitored the local atmospheric levels of methane. Due to its remoteness, and the absence of any significant local sources, the Untersee Oasis region makes it a good location for obtaining a methane sample representative of the average value for the southern hemisphere. 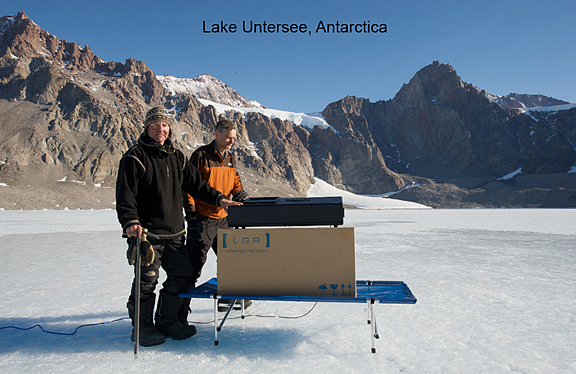 Our measurement, using a very, very sensitive methane analyzer made by Los Gatos Research, Inc. yielded a value of 1.730 ppm, which is in agreement with others who have made similar measurements around the world. Understanding sources and sinks for methane, particularly as the Earth's atmosphere and oceans warm is very important as we try to better understand the role that humans play in global climate change. 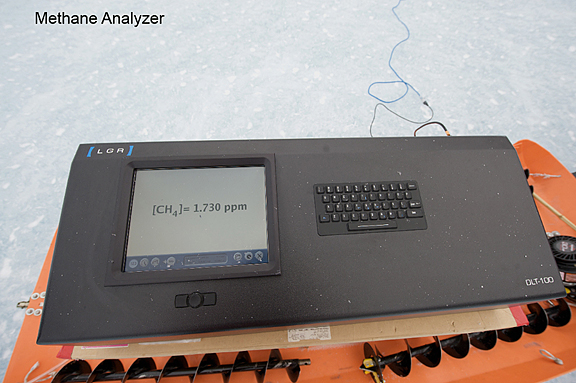 Wikipedia: "Lake Untersee, also known as Lake Unter-See, is the largest surface freshwater lake in the interior of East Antarctica. It is approximately 6.5 km long and 2.5 km wide and permanently covered with ice with an average thickness of 3.0 m in summer. The lake is dammed by the Anuchin Glacier feeding the lake and has no outlet. Water is only lost through evaporation and ablation of the ice cover."