The next robotic Mars exploration missions that will fly to the Red Planet will focus the aim of their research on the "Search for life". Both the Mars Science Laboratory (NASA) and ExoMars (ESA) have this primary objective and thus they will need scientific tools to accomplish this task. The analyses of rocks and soils will be a priority and such analyses include elemental and mineralogical composition to possible organic molecules.

One of the worth mentioning analytical techniques that are being tested during AMASE 2009 is a Raman spectrometer. Two researchers are involved in a very interesting project that will be very important for both expanding the capabilities of the next missions to Mars and also for the detection of signatures of life on the Red Planet: Prof. Fernando Rull, who is the principal investigator of a contact Raman spectrometer for ExoMars, and Antonio Sansano, who is working with Prof. Rull on his PhD thesis. Both are working at the University of Valladolid, Spain, developing two Raman spectrometers that will obtain really valuable information about the chemical and mineralogical composition of the Martian rocks. 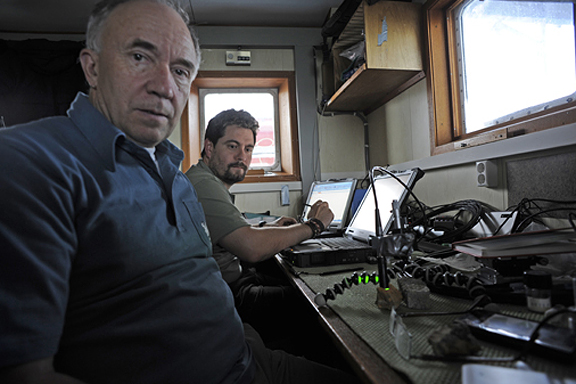 Raman spectroscopy is a process in which a monochromatic source (usually a laser) illuminates a sample, and this radiation is scattered by the matter of the sample. Most of the scattered radiation has the same wavelength -or frequency- as the incident radiation, but there is a very tiny (10-9) fraction that will be scattered with different wavelengths. This radiation, usually referred to as 'secondary radiation', was discovered by Sir Chandrasekhara Venkata Raman (1888-1970) winning the Nobel Prize in Physics in 1930. 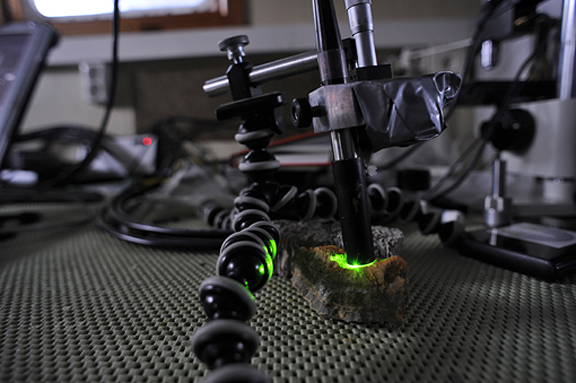 Why is the 'secondary radiation' so interesting? Because it can give us plenty of data about the atomic-molecular vibrations of matter that we are illuminating with the laser light, enabling us to obtain structural and compositional information, as well as physical-chemical characteristics of solid, liquid or gaseous samples. Furthermore, one of the great advantages of Raman spectroscopy is that we only have to illuminate our sample with a laser, so -if the power of the laser is not too high- this is a non-destructive technique and the sample needs no prior preparation at all. 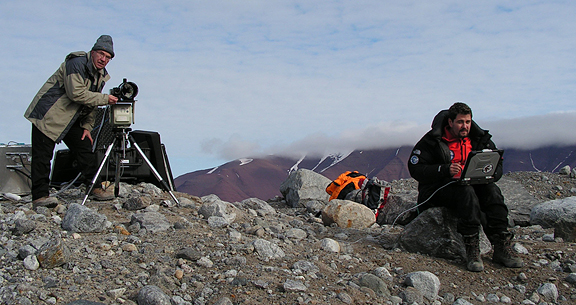 Considering the modern developments in spectrometry and optical fibre technology, as well as in miniaturization techniques for both spectrometers and detectors, it is not strange that Raman spectrometers could be really useful for planetary research missions. Although there were plans to include a Raman spectrometer aboard the Mars Exploration Rover missions, the devices were unfortunately discarded because of mass constraints for both probes. So the next mission that will include the first Raman spectrometer on Mars will be the EXOMars rover (ESA, 2019), that will acquire samples up to a maximum depth of 2 metres using a corer. These samples will be ground and transferred into small cache boxes located on a carrousel below various scientific instruments. Both the Raman spectrometer and an infrared microscopy will be the first instruments that will study the solid samples.

One of the field trips during AMASE 2009. While the group on the top is taking microbiological samples, Fernando and Antonio are obtaining measurements of glacier ice using the remote Raman system. Picture credit: Juan Diego Rodriguez-Blanco / AMASE.

However, the Spanish team is not only developing this EXOMars contact Raman; they are working also on another project that is even more thrilling and that was also tested during AMASE 2009: a remote Raman spectrometer which coupled to an optical telescope makes it possible to measure samples located at a distance from 8 to 130 metres away, yet this spectrometer has the same precision as the contact Raman spectrometer. The potential of studying rocks and sediments from afar with an instrument like this would significantly expand the capabilities of a Martian rover or lander, because the combination of panoramic and high resolution cameras with Raman spectrometry would allow analytical information without moving the rover to the sampling areas to be obtained; this would save lots of energy and time. Although this technology is not yet miniaturized it has potential for future Mars sample return missions where this technology could be essential when time/distance, etc. constraints are very tight.

The green laser is being targeted to study an ice section. The distance from the instrument to the target is about 100 metres. Picture credit: Juan Diego Rodriguez-Blanco / AMASE.

During AMASE 2009, both Rull and Sansano have analysed many different rock types that were part of several AMASE research tasks, they have participated in the AMASE 2009 SOWG (Science Operations Working Group) simulation of Mars rover missions and have shot a laser at a blue glacier ice from far away with the remote Raman, in order to evaluate the maximum distance from which ice -a very abundant compound in several planetary bodies- can be quantitatively analysed.