When it erupted onto the surface, the Black Point Lava flowed eastward over the older Permian and Triassic sedimentary rock sequences (spanning the period from roughly 300 to 240 million years ago) that are so well known around the vicinity of the Grand Canyon. The eastern edge of the flow slumps down to the surrounding plain, and it ends along the Little Colorado River (lower right).
Black Point Lava Flow is an excellent setting for training and systems testing for future exploration missions to the moon. In late August and early September 2009, scientists and engineers from NASA and several universities will travel to the Black Point Lava Flow to conduct tests for NASA's Lunar Electric Rover. This year, a team of geologists will support the tests, simulating traverses that might occur on the moon. The public is invited to follow the tests through blogs and other postings online. 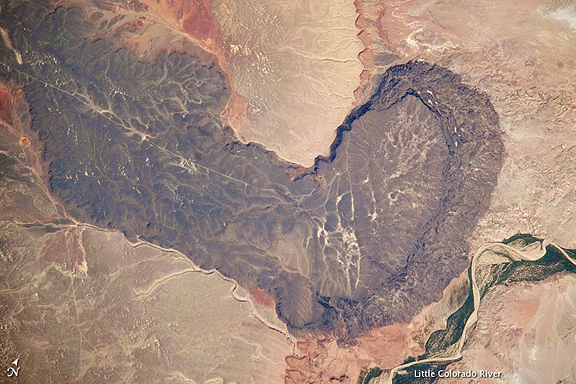 Astronaut photograph ISS020-E-33530 was acquired on August 21, 2009, with a Nikon D3 digital camera fitted with an 800 mm lens, and is provided by the ISS Crew Earth Observations experiment and Image Science & Analysis Laboratory, Johnson Space Center. The image was taken by the Expedition 20 crew. The image in this article has been cropped and enhanced to improve contrast. Lens artifacts have been removed. The International Space Station Program supports the laboratory to help astronauts take pictures of Earth that will be of the greatest value to scientists and the public, and to make those images freely available on the Internet. Additional images taken by astronauts and cosmonauts can be viewed at the NASA/JSC Gateway to Astronaut Photography of Earth. Caption by Cynthia A. Evans, NASA-JSC. download large image (479 KB, JPEG)