How can we be sure that instruments that will be sent on future Martian missions will work properly? How do we know that they will obtain accurate and precise measurements? How will we be able to compare the data to what we have seen on our planet? The answer is easy: by testing, testing and again testing them during field trips on Earth. This has been one of the most important goals of AMASE 2009.

During the AMASE 2009 expedition many different instruments to be sent to Mars have been tested in the course of a series of field deployments. The instruments were used to study specific sedimentary and igneous environments. Several of these instruments have been on AMASE before and the instruments are evolving year by year; they become smaller and more compact, but still remain accurate and are better and better at working under the harsh conditions of the arctic climate. Let's see some of the results that we have achieved this year: 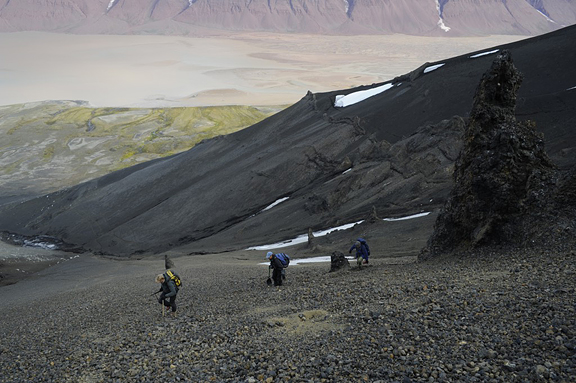 - SAM: A great instrument capable of giving us tons of information about organics in a Martian environment is SAM (Sample Analysis at Mars). SAM is an integrated suite consisting of a gas chromatograph mass spectrometer and a tunable laser spectrometer that will fly aboard NASA's Mars Science Laboratory mission in 2011. SAM can carry out mineral and atmospheric analyses, detecting a wide range of organic compounds as well as obtaining stable isotope analyses of organics and noble gases. To achieve this SAM will use powdered rock samples that are heated from ambient to 1000* C in a helium stream and the evolved gases are continuously analyzed by a mass spectrometer.

Paul Mahaffy, the principal investigator of SAM, works at the Solar System Exploration Division at NASA Goddard Space Flight Center. This year he has used SAM to study carbonate samples from the Sverrefjell volcano and has focussed on macromolecular carbon (MMC) associated with magnetite in the carbonate globules found in an ice cave formed after the eruption of the volcano into glacial ice. This material is similar to those carbonates in the Martian meteorite ALH84001, but previous AMASE research has shown that the carbonates on Svalbard - although excellent analogues for ALH84001 - have formed abiotically. However, these studies carried out with SAM have been very useful in better understanding the ability and limitations of this in-situ instrument to distinguish biomarkers. 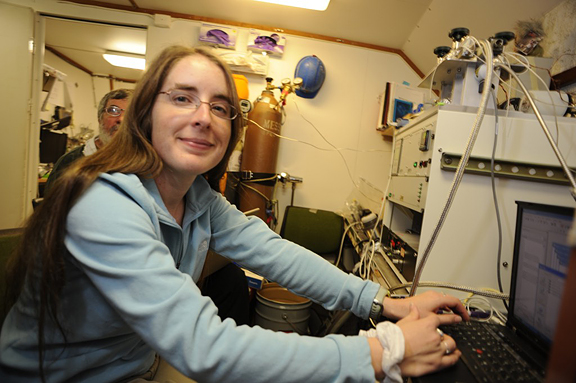 - CheMin: There are two common tools that geologists use when they need to obtain analytical and mineralogical composition of solid samples. The first one is X-ray diffraction (XRD), a non-destructive powerful technique that can give us qualitative and quantitative information about the mineralogy of a rock with just a small amount of sample, less than one gram of material. Although there are different variations of XRD, the most useful method for geologists is powder X-ray diffraction, which uses a powdered solid to identify the minerals present in the sample and obtain its mineralogical composition and structural characteristics, as well as data about crystallinity.

Another not less important analytical technique is X-ray Fluorescence (XRF), the emission of fluorescent X-rays from a sample due to excitation with high-energy X-rays. By using this technique elemental and chemical analysis can be performed, both from minerals or non-crystalline samples.

Both XRD and XRF are necessary to obtain data about the composition of the Martian rocks and soils, as they can give us information about the past habitability of the Martian environment where the rocks were formed. Although conventional XRD and XRF instruments have the size of a couple of washing machines, the fabulous work of David Blake (NASA AMES Research Center) has lead to the development of a combined XRD and XRF instrument (CheMin) that has the size of a small suitcase and that is capable of doing the same tasks at the highest resolution. All samples obtained during AMASE 2009 expedition have been analyzed with CheMin, another state of the art instrument that will fly aboard NASA's Mars Science Laboratory mission. 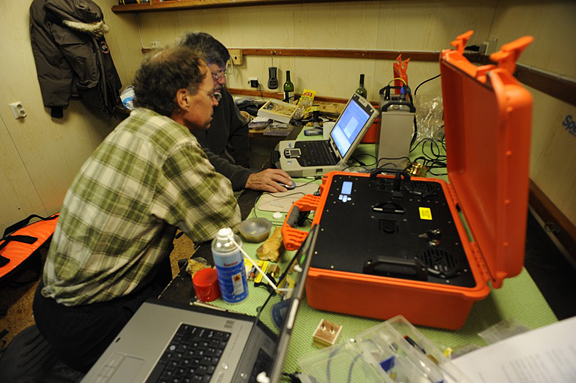 - PanCam: An important suite of instruments that will fly on the ExoMars mission is a Panoramic Camera system that is being developed by the Institute of Planetary Research (German Aerospace Center, AMASE PanCam PI Nicole Schmitz). Many tests have been carried out during AMASE 2009, taking the PanCam to different outcrops in diverse geological environments and combining the observations with other instruments (SAM, CheMin, Raman, infrared...). This instrument includes two wide angle cameras (WAC) and a high resolution camera (HRC). The WAC has a 34x27 degrees of view and includes six filters for colour stereo imaging, three for colour single shot imaging and twelve geological filters for multispectra imaging (wavelengths from 440 to 1000 nm).

Complementary to this the HRC has 4 degrees of view (almost eight times higher resolution than the WAC) and three RGB colour filters. It goes without say any PanCam imaging helping observations and initial characterization of any Martian environment is crucial. To be able to obtain multi-spectral geological imaging, colour and stereo panoramic images, water vapour abundance and dust optical depth measurements are just a few of the fantastic capabilities on this instrument. Finally, PanCam will not just be useful for remote observations but will also very crucial for observing and classifying retrieved subsurface samples before they are sent to the analytical suite for future analyses by the rest of the instruments. 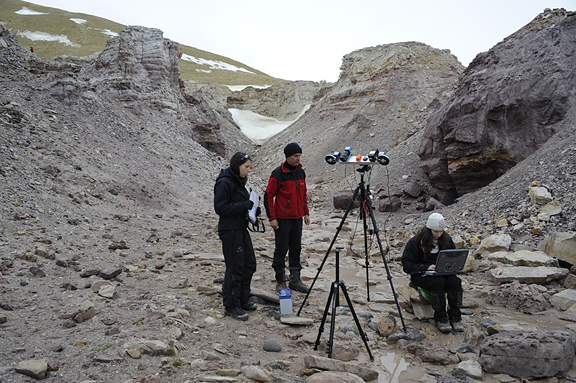 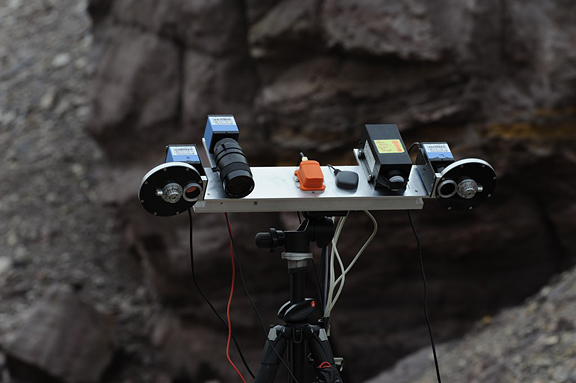 - WISDOM: one instrument that will permit ExoMars to look at the Red Planet with different eyes is WISDOM. It is being developed by the Forsvarets Forskningsinstitutt (Norway, PI. Svein-Eric Hamran) and consists in a ground penetrating radar that is able to reveal a detailed view of the near subsurface of the landing area. This is really useful when we want to search for water ice deposits or study the sedimentary rocks and understand the local stratigraphy. WISDOM operates in the UHF frequency range from about 0.5 to 3 GHz and although it is a shallow sounding system it gives high resolution data, either for the upper few meters of even up to a depth of 80 metres. It consists in two antennas that are used at the same time for the transmission of pulses and reception of the reflected signals.

This way the electromagnetic waves can be reflected by the discontinuities of the subsurface. Moreover, the information from this instrument will permit an early interpretation of the materials acquired with the drilling system up to 2 metres of depth. All the areas that were visited during AMASE 2009 expedition for sample characterization and instrument testing have been also studied with WISDOM. 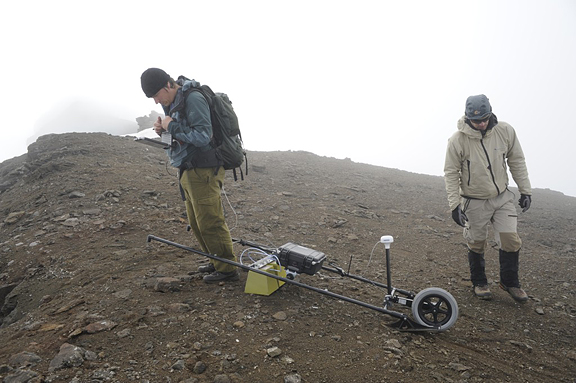 - FTIR: Infrared measurements will be really useful to characterize Martian rocks and sediments and ExoMars has on its payload a u-infrared imager (MicrOmega). Although not part of the AMASE 2009 payload a portable Fourier Transform Infrared spectrometer (FTIR) was tested in conjunction with the other instruments. Infrared spectra give valuable information about solid (crystalline or amorphous) or liquid, inorganic or organic compounds based on the different vibration modes of the chemical bonds. Mid- Infrared is specifically important for organic molecules and during AMASE 2009 a portable FTIR system (University of Leeds, A2 Technologies, PI Liane G Benning) was used in the field - and during the SOWG, see previous blog entries - as an important characterization and distinguishing tool.

This FTIR was operated by Juan Diego Rodriguez-Blanco (School of Earth and Environment, University of Leeds) and it provided crucial chemical information that, combined with other instruments -Raman, Chemin or SAM- showed us a global mineralogical and (bio)chemical picture, including the possible presence of organics. 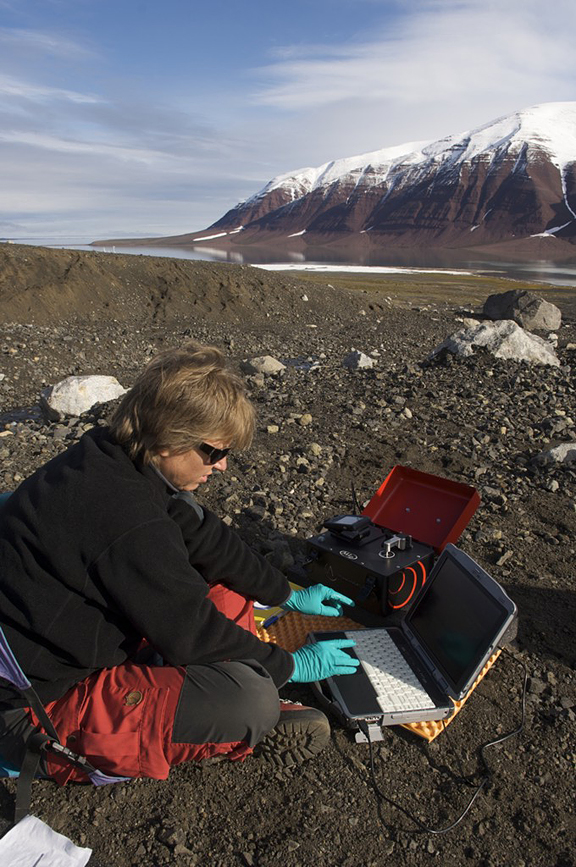 
The combination of all these instruments that will be part of future payloads on missions to Mars will give us the appropriate information to carry out the search for past or present life on Mars. Such instruments will be also crucial in preparation for any future Mars Sample Return (MSR) mission, one of the most challenging technological enterprises in a medium-term future. If we consider a Mars sample return mission scenario, one of the most difficult tasks will be the selection of a less than 1 kilogram rock or soil sample to return to our planet.

How will we know where to go, what sample to choose or where are the really interesting materials that can tell us information about present or past habitability on Mars? And how will we manage if we need to obtain the sample 'as soon as possible' (days or weeks)? All these instruments if onboard the MSR mission will provide first guidance for the 'correct' and most appropriate sample as in concert with each other these instruments represent a miniaturized version of a terrestrial laboratory that researchers use for their daily work. Naturally for any MSR selection the scientists on Earth will depend on them to decide what actions to take.

For that reason, the reliability and accuracy of instruments like the PanCam, SAM, CheMin, WISDOM, Raman or FTIR will be decisive for the success of the next missions to the Red Planet.