Since the successful inaugural launch of Falcon 9 in June, we have been busy preparing for our next launch, which includes the first flight of an operational Dragon spacecraft. This is also the first launch under NASA's Commercial Orbital Transportation Services (COTS) program. Under COTS, NASA is partnering with commercial companies like SpaceX to develop and demonstrate space transportation capabilities.

The upcoming demonstration mission will launch from Cape Canaveral and should follow a flight plan nearly identical to the first Falcon 9 launch, but this time the Dragon spacecraft will separate from the second stage and will demonstrate operational communications, navigation, maneuvering and reentry. Although it does not have wings like Shuttle, the Dragon spacecraft is controlled throughout reentry by the onboard Draco thrusters which enable the spacecraft to touchdown at a very precise location - ultimately within a few hundred yards of its target.

The bill sets NASA on an exciting course to focus on exploration beyond low-Earth orbit, while recognizing the valuable role American companies are ready to undertake in ending our reliance on Russia to carry our astronauts to the International Space Station.

Investing in commercial crew transport will build on NASA's proud record of innovation and will create competition that will force companies to improve reliability, increase safety, and reduce costs. As we move forward with our first demo flight under the COTS program, we look forward to helping jumpstart America's space program and secure our leadership position in space.

On September 15th we completed a successful wet dress rehearsal (WDR) which involved rolling the rocket out to the pad, loading it with propellants, performing a complete launch countdown sequence to just before ignition, and then unloading the propellants and returning the vehicle to a safe state. This latest wet dress rehearsal included new steps and sequences necessary to accommodate the operational Dragon spacecraft.

Prior to the successful WDR, we completed our first integration of a Falcon 9 and an operational Dragon spacecraft. We integrate Falcon 9 and Dragon horizontally in the hangar. This makes payload processing easier, and also eliminates the large expense of building and maintaining a vertical mobile service tower. 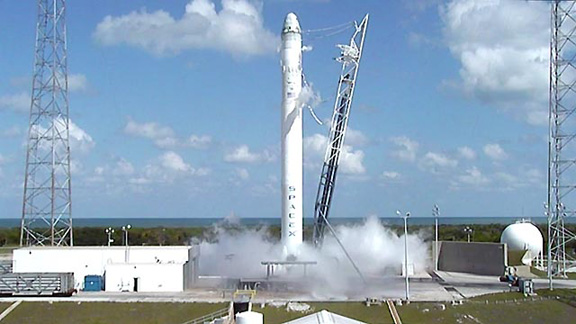 Falcon 9 Demonstration Flight 2 on the launch pad during the full wet dress rehearsal,
which includes everything up to just before engine ignition. Photo: SpaceX. 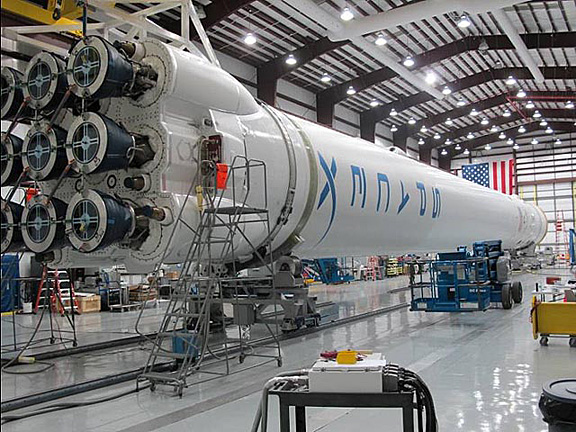 With integration complete, we transfer the Falcon 9/Dragon vehicle to our mobile transporter erector and roll it out of the hangar to the launch pad on standard railroad tracks. There, we connect the entire system to the launch pad, and rotate it to vertical.
In the coming weeks we will conduct a static test firing, which involves a full countdown leading up to the engines firing as they would for launch, but with the rocket held firmly to the pad. The following update covers some of the major progress in the past months towards this second demonstration flight.

Designed to transport several tons of cargo or a crew of seven astronauts to and from Earth orbit, Dragon is physically smaller than Falcon 9, but represents almost the same scale of technological difficulty. 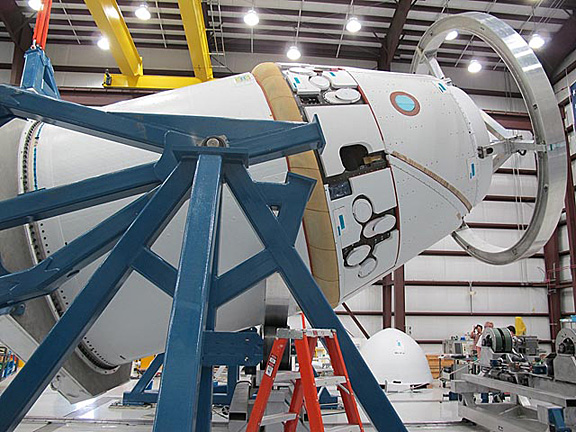 The Dragon spacecraft is mounted on the breakover fixture in the hangar at Cape Canaveral. Photo: Brian Attiyeh / SpaceX. 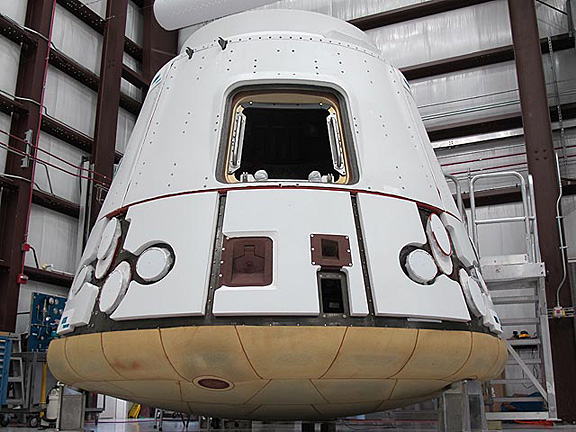 In the SpaceX hangar at Cape Canaveral, the Dragon spacecraft prepares for integration with the Falcon 9 launch vehicle. Visible at the base of the spacecraft is Dragon's heat shield, made of PICA-X, the SpaceX manufactured variation on NASA's Phenolic Impregnated Carbon Ablator (PICA) heat shield material. Dragon will reenter the Earth's atmosphere at around 7 kilometers per second (15,660 miles per hour), heating the exterior up to 1850 degrees Celsius. However, just a few inches of the PICA-X material will keep the interior of the spacecraft at a comfortable temperature. Photo: Michael Rooks / SpaceX.

In our Hawthorne Mission Control Center, we have conducted numerous flight simulation tests in preparation for Dragon operations. Depending on the needs of a test, we can conduct live operations with NASA mission control, and even the ISS. 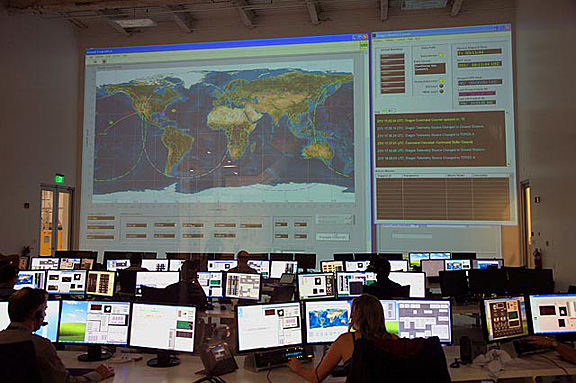 In preparation for Dragon missions arriving at the ISS under NASA's COTS and Commercial Resupply Services (CRS) programs, we have hosted more than a dozen astronauts from NASA and international partners to date, including Italy, Netherlands, and Japan.

The training sessions work in both directions; we give astronauts hands-on experience with all aspects of Dragon operations, and SpaceX team members receive valuable insights into the fine points of living and working in space, and important feedback to incorporate into our designs and operational planning.

As part of our participation in the COTS program, we outfitted the interior of the second production Dragon spacecraft with lockers, racks and restraints as will be used for transporting cargo deliveries to and from the ISS. 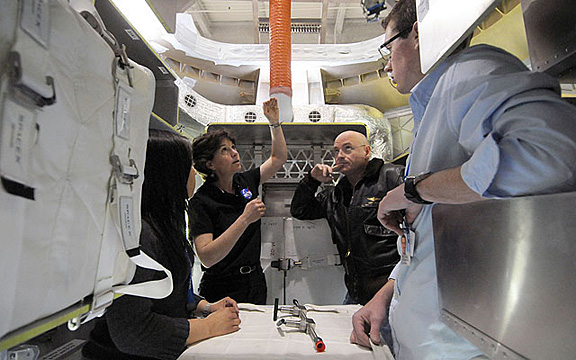 Even when outfitted with the full cargo storage system, Dragon has plenty of room. Visiting NASA astronauts Cady Coleman and Scott Kelly discuss spacecraft cargo operations with SpaceX engineers. Both experienced space travelers, Cady and Scott are scheduled for upcoming missions to the ISS. Photo: SpaceX.

Visiting astronauts Akihiko Hoshide from Japan, and NASA astronaut Sunita Williams in front of the full size Dragon model spacecraft. Both have extensive spaceflight experience, and will be stationed aboard the ISS during upcoming Dragon cargo missions. Photo: SpaceX.

We are thrilled to support the USA's continuing human spaceflight program and the full utilization of the ISS.

Progress continues on the third Falcon 9 vehicle, as well as the next Dragon spacecraft, both of which will fly for NASA in the coming months. We have the first and second stage tanks in process, Merlin engines being completed and test fired, and the Dragon spacecraft under way. 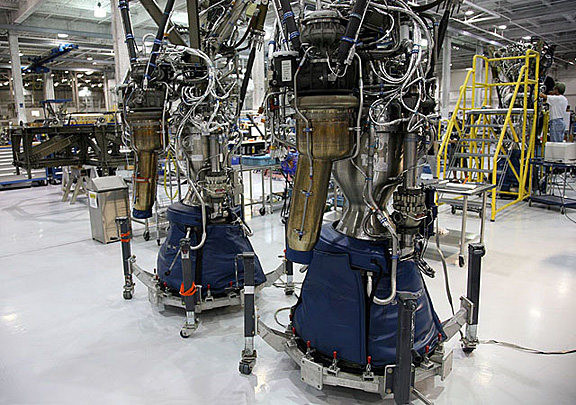 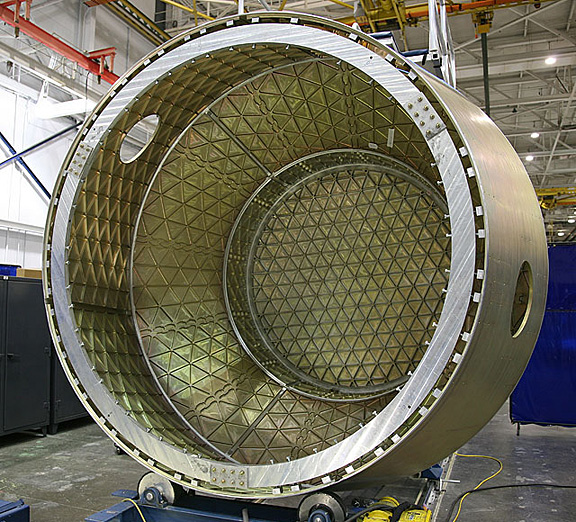 The pressure vessel for the next COTS Dragon spacecraft takes shape in Hawthorne. This arrived as a shipment of flat aluminum stock. We machined the triangular isogrid pattern, curved them into conic sections, and welded them into a vessel. By performing extensive production in-house SpaceX keeps costs low, quality high, and production timing streamlined. Photo: SpaceX.