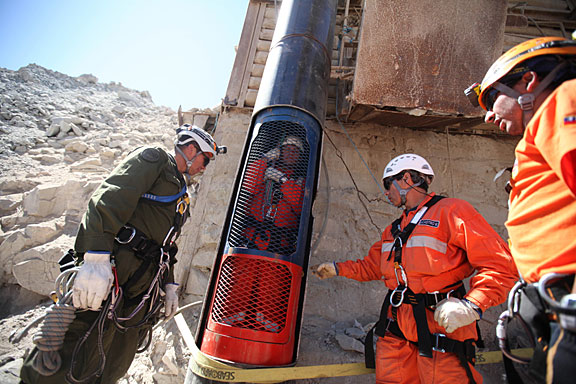 Rescue workers practice a dry run with one of the capsules used to liberate the trapped miners at the San Jose mine near Copiapo, Chile, on October 11, 2010. Photo Credit: Hugo Infante/Government of Chile

Don Cohen: In the summer and fall of 2010, the world followed the story of thirty-three Chilean miners trapped nearly half a mile underground and celebrated their successful rescue in October. A team from NASA that included physicians, a psychologist, and engineers contributed to that success, providing knowledge gained from spaceflight programs to the government and experts dealing with this down-to-earth emergency. Traveling to the mine site in Copiapo, Chile, they developed a cooperative relationship with Chilean officials and specialists that made it possible to share their knowledge effectively.

The depths of a mine in South America are a long way from the Space Shuttle and the International Space Station, but there is a natural fit between what NASA knows and what the Chilean rescue team needed to know. Among other things, the space program has been an opportunity for decades of learning about the psychology and physiology of groups of people in confined spaces. And the agency's contingency planning--for instance, for rescuing the crew of a damaged shuttle--has included studying orbital equivalents of the miners' situation.

An existing relationship helped bring together agency experts and the Chileans. A NASA delegation that included Lori Garver, deputy administrator of NASA, and Al Condes, deputy associate administrator for International and Interagency Relations, had encountered Chilean space agency personnel at a meeting of the United Nations Committee on the Peaceful Uses of Outer Space. That connection led to a half-hour phone call between Dr. Mike Duncan, deputy chief medical officer at the Johnson Space Center (and eventual NASA team lead), and the Chilean Minister of Health. A teleconference later the same day provided NASA experts with an overview of the emergency. Using a mobile phone, the Chilean Minister of Health and several other Chilean health-care personnel at the San Jose mine summarized the health status of the miners and described their underground environment. Participating in the telecon from NASA were Duncan; Dr. J. D. Polk, chief of the space medicine division; Dr. Al Holland, operational psychologist; and three nutritionists: Barbara Rice, Sara Zwart, and Holly Dlouhy. These NASA experts e-mailed an initial set of medical, psychological, and nutritional recommendations to Chile shortly after that call. 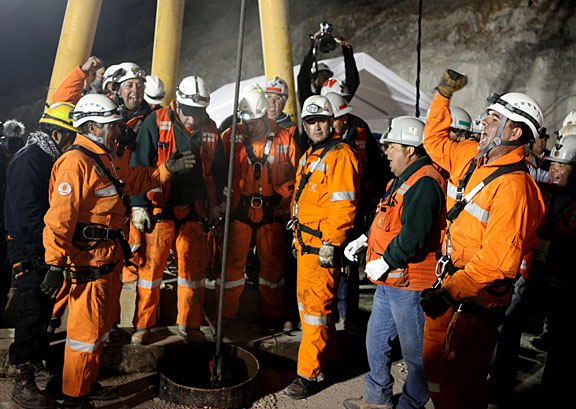 The last of the trapped miners returns to the surface on October 13, 2010. Photo Credit: Hugo Infante/Government of Chile

During the teleconference, Duncan offered to bring a NASA team to the mine site, a suggestion that was readily accepted. He made the offer, he said, because "experience tells you you get a better understanding out of being there." That proved to be true, but better insight into the situation was not the only benefit of the five days the team spent in Chile at the end of August and beginning of September.

Being there allowed team members to develop relationships with their counterparts that were the kinds of social connections through which expertise can be understood, trusted, and put to use. Shared professional experience cemented these bonds and helped overcome differences in language and culture. NASA Engineering and Safety Center (NESC) Engineer Clint Cragg discovered that, like him, his Chilean counterpart had been a submariner. In addition to creating common ground, that background gave them both firsthand knowledge of what it meant to share a confined space with a group of men. They also had engineering in common, just as the physician-to-physician and psychologist-to-psychologist connections created common ground. (NASA psychologist Holland's counterpart was named Alberto; sharing a name, though in most ways a trivial connection, also helped bring them together.) Physician Polk said, "We went down representing our government; we left as friends."

Once in Copiapo, the team discovered that their earlier e-mails had never gotten to the people who needed them. That alone was a powerful argument for the value of being there. And the language difference, something of a problem during a teleconference or cell-phone conversation, ceased to be an issue working face to face, with Spanish speakers who had a good grasp of English and with the assistance of interpreters.

Central to the medical expertise that NASA shared with the Chileans was an understanding of refeeding syndrome--the danger of overwhelming people who have been malnourished with the wrong kinds and quantity of food. After even a few days of starvation, a sudden influx of carbohydrates and calories can cause a rapid rise in insulin levels and associated metabolic effects that can lead to death. This lesson was learned the hard way after the world wars of the twentieth century, when well-meaning efforts to feed rescued prisoners of war and concentration camp internees caused many deaths. NASA has applied its understanding of the syndrome to contingency planning for the shuttle. The crew of a shuttle stranded at the Hubble telescope would have had to wait months for rescue, surviving on a diet of no more than 800 calories a day, so it was essential to plan for their safe renourishment.

The Chilean miners were starving, sharing very limited rations for seventeen days before the first supply hole was drilled. The four-inch diameter of the hole in effect imposed an appropriate level of refeeding, since it was impossible to send too much food to thirty-three men through such a narrow channel. But NASA's refeeding expertise helped develop an informed plan for bringing the miners back from starvation that included keeping nourishment at an appropriate level when a second hole for delivering supplies became available. Polk said, "We knew we were making progress nourishing the miners when one of them sent back a dessert because it wasn't what he wanted."

Holland's field--the psychology of confinement--is a rare specialty. His first task was to quickly give his Chilean colleague a framework for his recommendations. Once on site, he learned that the miners had more room than he'd thought; they had access to a little over a mile of tunnel as well as the garage-size space he knew about. This made it easier to find ways to deal with issues of privacy and hygiene while the men remained trapped.

All the members of the NASA team concluded that the Chileans, understandably focused on the rescue itself, had not yet thought through psychological and medical issues that would arise after they were brought to the surface. Chief among these was the importance of exposing the miners only gradually to family and others. Past space missions and the experience of prisoners of war had taught that it was critical to limit and carefully control contact during the first forty-eight hours.

NASA team members were impressed by the readiness of the Chileans to request and receive help from others, as well as the willingness of people throughout the country and around the world to contribute to the rescue effort--and their ingenuity. The miners were dealing with harsh conditions: a temperature of 90*F, 90 percent humidity, and only hard, damp rocks to sleep on. Chilean officials put out a general call for sleeping cots that could be rolled up into cylinders no more than four inches wide. A few days later, thirty-three cots arrived at the site.

Once the second borehole was expanded to a diameter of a little more than 2 ft., rescue became possible. The initial requirements the Chileans devised for the rescue capsule were quite general, limited to maximum diameter, height, and weight, with no design specifics. The NASA team worked on recommendations for the capsule as soon as they returned to the United States.

Arriving home just before Labor Day weekend, Cragg sent out a request for engineers to help. The response was immediate and enthusiastic. On Tuesday morning, about twenty engineers met to formulate their recommendations.

The engineers worked with the physicians and psychologist on elements of the design that would ensure the well-being of the miners during what they were told would be a trip to the surface that could take between one and four hours. They recommended including devices that could deliver oxygen and measure oxygen levels during the ascent. Two-way audio and video communication was also recommended, to monitor the condition of the miners and lessen their sense of isolation as they slowly rose through a narrow, half-mile-long hole.

Being there allowed team members to develop relationships with their counterparts that were the kinds of social connections through which expertise can be understood, trusted, and put to use.

The final set of recommendations included a harness that would allow the occupant to escape back down the hole if the capsule became stuck, the requirement that a single person be able to strap himself in the capsule, and a strategy for dealing with friction in the borehole that could otherwise break the capsule after repeated trips. They recommended either Teflon pads or spring-loaded wheels. The second of those choices was adopted by the Chileans.

Cragg said he was impressed by how good the NASA engineers were at thinking the problem through and imagining what could go wrong. They also thought carefully about how to present the recommendations. Their initial plan was to organize them by functional area (for instance, power, structure, materials, and human factors). One of the engineers quickly realized that they should instead be divided into two sections, structure and support services, so that those elements could be worked on separately. Two Spanish-speaking members of the team helped make sure the recommendations would be clear to non-native English speakers.

On Friday, they had finished. Cragg noted, "The NESC routinely assembles teams on short notice to help solve problems. Our previous experience helped to get our list of suggested requirements done rather quickly." They sent the results to Chile. The message came back: "We understand it all." Again at a Distance

Back home, the team members again experienced some of the difficulty of trying to work at a distance. Duncan said it was helpful to know people individually and have their direct e-mail addresses, but it was frustrating not to be sure that the information offered by the NASA team got where it needed to go. Holland talked about the difficulty of not being able to monitor changing psychological conditions directly, and the delay caused by having to translate e-mails sent back and forth between the two countries.

But the combination of personal relationships and new communication technology could work wonders at a distance. On a Skype call, Polk's Chilean counterpart asked him to recommend a safe speed for the rescue capsule, one that would not cause men in a weakened condition to black out. Polk, at home with his laptop, e-mailed a couple of colleagues, checked some web sources, and was able to provide the answer in a few minutes without leaving the couch he was sitting on.

Members of the NASA team emphasize that the Chileans were always the major players in the rescue effort, and that their determination and skill were key to its success. But NASA's expertise unquestionably contributed to that outcome. When, like the rest of the world, the team members watched the miners emerge one by one to be embraced by their loved ones, they knew they had helped turn a potential tragedy into a triumphant reunion.