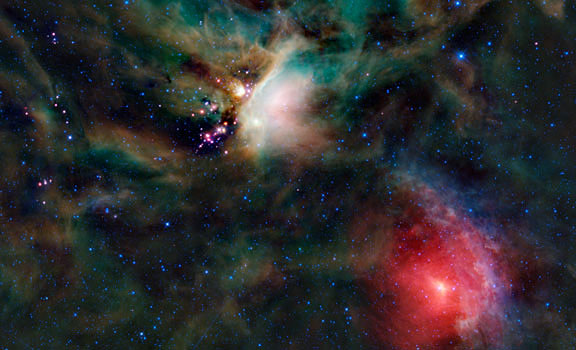 A rich collection of colorful astronomical objects is revealed in this picturesque image of the Rho Ophiuchi cloud complex from NASA's Wide-field Infrared Explorer, or WISE. Image credit: NASA/JPL-Caltech/UCLA Full image and caption

It might look like an abstract painting, but this splash of colors is in fact a busy star-forming complex called Rho Ophiuchi. NASA's Wide-field Infrared Explorer, or WISE, captured the picturesque image of the region, which is one of the closest star-forming complexes to Earth.

The amazing variety of colors seen in this image represents different wavelengths of infrared light. The bright white nebula in the center of the image is glowing due to heating from nearby stars, resulting in what is called an emission nebula. The same is true for most of the multi-hued gas prevalent throughout the entire image, including the bluish, bow-shaped feature near the bottom right. The bright red area in the bottom right is light from the star in the center - Sigma Scorpii - that is reflected off of the dust surrounding it, creating what is called a reflection nebula. And the much darker areas scattered throughout the image are pockets of cool, dense gas that block out the background light, resulting in absorption (or 'dark') nebulae. WISE's longer wavelength detectors can typically see through dark nebulae, but these are exceptionally opaque.

JPL manages and operates the Wide-field Infrared Survey Explorer for NASA's Science Mission Directorate, Washington. The principal investigator, Edward Wright, is at UCLA. The mission was competitively selected under NASA's Explorers Program managed by the Goddard Space Flight Center, Greenbelt, Md. The science instrument was built by the Space Dynamics Laboratory, Logan, Utah, and the spacecraft was built by Ball Aerospace & Technologies Corp., Boulder, Colo. Science operations and data processing take place at the Infrared Processing and Analysis Center at the California Institute of Technology in Pasadena. Caltech manages JPL for NASA. More information is online at http://www.nasa.gov/wise and http://wise.astro.ucla.edu and http://jpl.nasa.gov/wise .