Photo: Horseshoe 2 Fire in Arizona As Seen From Orbit 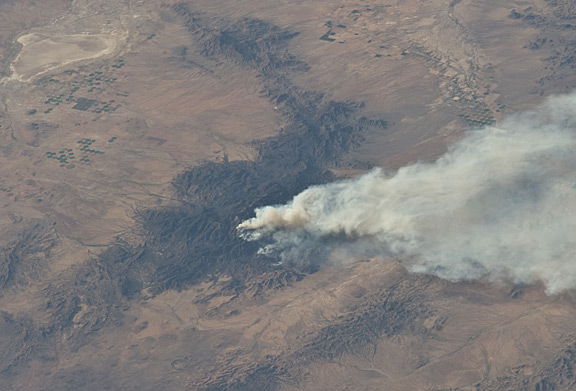 The Horseshoe 2 fire is featured in this image photographed by an Expedition 27 crew member on the International Space Station. The Horseshoe 2 fire, located along the southeastern flank of the Chiricahua Mountains in southeastern Arizona, began on May 8, 2011 at approximately 11:00 a.m. The fire is thought to have been started by human activities.

This photograph illustrates the area (approximately 8,900 hectares, or 22,110 acres) and position of the fire within the mountains on May 15, 2011, as well as an extensive smoke plume extending to the east-northeast over a distance of at least 60 kilometers (approximately 40 miles). As of May 19, 2011, the fire had burned an area of nearly 14,000 hectares (approximately 34,400 acres) of grasses, shrubs, and trees along the mountain slopes. The Chiricahua Mountains are included within the Chiricahua National Monument located near the borders of Arizona, USA; New Mexico, USA; and Chihuahua, United Mexican States. Elevations in the mountains range from approximately 914 -- 3,267 meters (300 -- 10,720 feet) above sea level.

The higher elevationsóknown regionally as "sky islands"óallow for biologically diverse plant and animal communities, adapted to cooler and wetter conditions, to survive while surrounded by semi-arid to arid desert conditions at lower elevations. The image highlights this contrast in environments; pine and oak forest contributes to the dark coloration of the upper slopes and peaks of the Chiricahuas at center, while the flat, gray to tan surface of Willcox Playa (an interior-draining basin or dry lake) to the northwest is indicative of the adjacent desert environment. ISS027-E-031908 (15 May 2011) --- high res (1.1 M) low res (73 K)