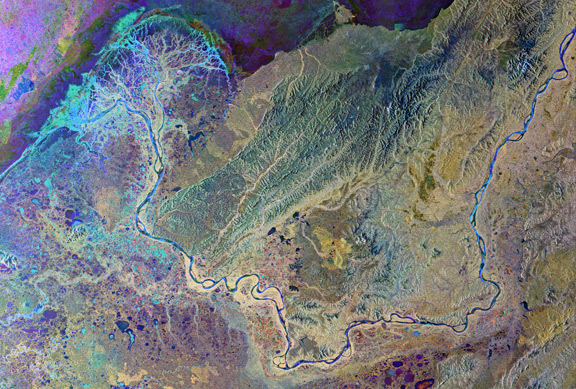 This Envisat image features Alaska's Yukon Delta, where the Yukon River, North America's fifth-longest river system, fans out into a labyrinth of distributaries before emptying into the Bering Sea.

Originating on the northern border of British Columbia in Canada, the Yukon flows some 3190 km across central Alaska in the US before emptying into Norton Sound (top left).

The Yukon is one of the most important rivers in the world for salmon breeding and annually hosts the longest upstream migration of Pacific salmon stocks in the world.

According to some anthropologists, it was also the main migration route for North America's first human inhabitants.

This image was created by combining three Envisat radar acquisitions (19 November 2009, 8 April 2010 and 13 May 2010) over the same area. The colours represent changes in the surface between acquisitions.