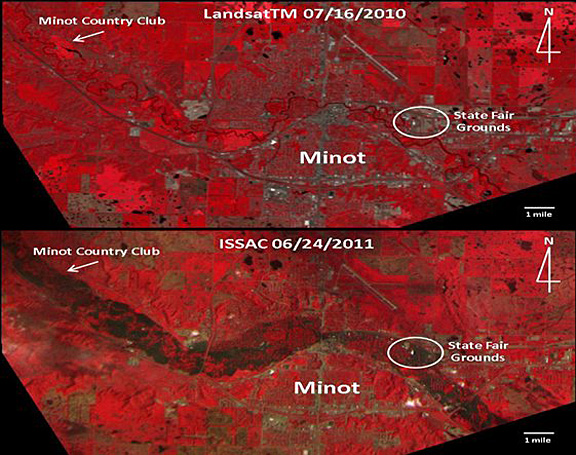 (Highlights: Fourth Week of August 2011) -- The International Space Station Agricultural Camera (ISSAC) took flood images of Minot, ND, showing a false-color composite with three spectral bands; near infrared, red, and green band. With this band coloring, water is dark in color, vegetation is shown in red. The camera takes frequent images in visible and infared light of vegetated areas. ISSAC is also used to study dynamic Earth processes around the world, such as melting glaciers, ecosystem responses to seasonal changes and human impacts, and rapid-response monitory of natural disasters.

Satoshi Furukawa and Michael Fossum completed their third session of Treadmill Kinematics. This experiment is the first rigorous investigation to quantify the biomechanics of treadmill exercise conditions during long-duration spaceflight on the station. Exercise prescriptions are developed under the assumption that walking and running in microgravity have the same training effects as during normal gravity. However, if locomotion kinematics and kinetics differ between microgravity and normal gravity, understanding these mechanisms allows the development of appropriate exercise prescriptions to increase exercise benefits to crew health and well being.

On Aug. 26, Satoshi Furukawa completed his second Integrated Cardiovascular (ICV) session, which included an echo scan, holter monitoring and ambulatory monitoring. ICV seeks to quantify the extent, time course and clinical significance of cardiac atrophy (decrease in the size of the heart muscle) associated with long-duration spaceflight, as well as identify the mechanisms of this atrophy and the functional consequences for crew members who spend extended periods of time in space.

The Japanese Aerospace Exploration Agency is performing protein crystallized growth experiments in the Protein Crystallization Research Facility (PCRF). JAXA has developed a new technique that estimates the driving force ratio of crystals grown on the ground and in space, and the capture ratio of impurities through the diffusion/capture coefficient of protein. This technique proved that under microgravity conditions, with high viscosity and slow diffusion, a protein depletion zone and impurity depletion zone will appear. The goal is to get high quality protein crystals and contribute to determining structural information on proteins for the development of biotechnology applications.