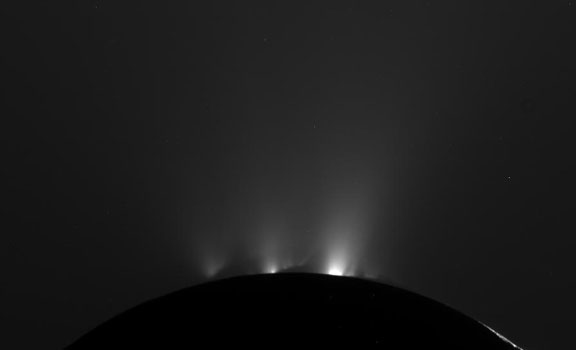 NASA's Cassini spacecraft successfully completed its Oct. 1 flyby of Saturn's moon Enceladus and its jets of water vapor and ice. At its closest approach, the spacecraft flew approximately 62 miles (100 kilometers) above the moon's surface. The close approach was designed to give some of Cassini's instruments, including the ion and neutral mass spectrometer, the chance to "taste" the jets themselves.

At a higher vantage point during the encounter, Cassini's high-resolution camera captured pictures of the jets emanating from the moon's south polar region. The latest raw images of Enceladus are online at: http://saturn.jpl.nasa.gov/photos/raw/ .

The images of the surface include previously seen leading-hemisphere terrain. However, during this encounter, multi-spectral imaging of these terrains extended farther into the ultraviolet region of the electromagnetic spectrum than had previously been achieved at this resolution. By looking at the surface at ultraviolet wavelengths, scientists can better detect the difference between surface materials and shadows than they can at visible wavelengths, where icy materials are highly reflective and shadows are washed out. With both ultraviolet and visible images of the same terrain available to them, scientists will better understand how the surface coverage of icy particles coming from the vents and plumes changes with terrain type and age.

Cassini's next pass of this fascinating moon will be Oct. 19, when the spacecraft flies by at an altitude of approximately 765 miles (1231 kilometers).

The Cassini-Huygens mission is a cooperative project of NASA, the European Space Agency and the Italian Space Agency. The Jet Propulsion Laboratory, a division of the California Institute of Technology in Pasadena, manages the mission for NASA's Science Mission Directorate, Washington. The Cassini orbiter and its two onboard cameras were designed, developed and assembled at JPL. The imaging operations center is based at the Space Science Institute in Boulder, Colo. The Ion and Neutral Mass Spectrometer science team is based at the Southwest Research Institute, San Antonio, Texas.

For more information about the Cassini-Huygens mission, visit http://www.nasa.gov/cassini and http://saturn.jpl.nasa.gov .