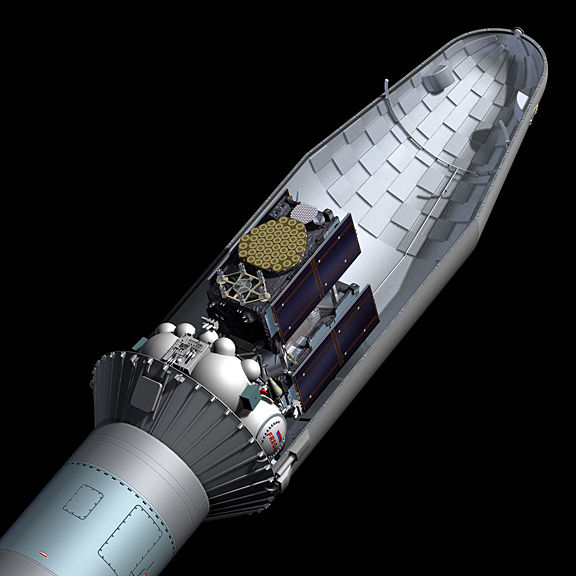 Image: Galileo IOV satellites attached to their launch dispenser and encapsulated beneath the fairing of their Soyuz ST-B launcher

ESA's first two Galileo navigation satellites are both now fuelled and checked for their launch by Soyuz from French Guiana on 20 October. The two Galileo In-Orbit Validation satellites reached Europe's Spaceport last month. Galileo's second flight model, FM2, touched down on 7 September on an Antonov-124 and the Galileo Protoflight Model followed it seven days later on an Ilyushin 76.

Both satellites are now fuelled and ready to be mated this week onto the dispenser that will hold them in place during launch before deploying them into their final 23 222 km orbit.

The combined payload stack - the dispenser and both satellites - will then be transported from the fuelling facility to the Upper Composite Integration Facility S3B for integration with their Fregat-MT upper stage and subsequent encapsulation.

This month's launch will be historic: the first Soyuz launch from a spaceport outside of Baikonur in Kazakhstan or Plesetsk in Russia.

As a medium-class vehicle, Soyuz will complement Ariane and Vega to extend the flexibility and competitiveness of Europe's launcher family.

The first two Galileo IOV satellites, launched this month, will be followed next year by two more. This quartet of satellites, built by a consortium led by EADS Astrium Germany, will form the operational nucleus of the full Galileo satnav constellation.

They combine the best atomic clock ever flown for navigation - accurate to one second in three million years - with a powerful transmitter to broadcast precise navigation signals.