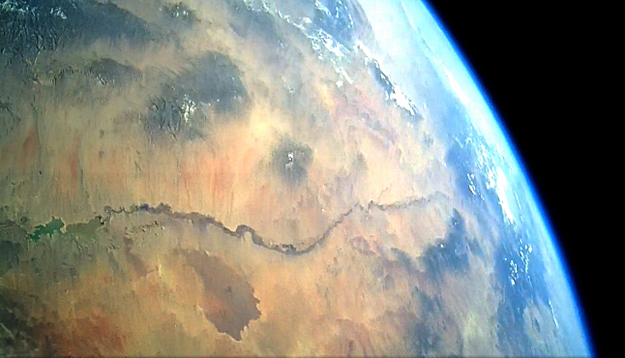 Saturday's Armadillo launch successfully lifted off at approximately 11:15 a.m. (MDT), which was within the dedicated, five-hour launch window, and flight data indicates the rocket attained a maximum altitude of approximately 82-km (~50 miles). A failure of the ballute (balloon-parachute) recovery system meant that the GPS-steerable main parachute could not be deployed as intended; however, the vehicle was successfully recovered within the predicted operating area and the nose cone and ballute were separately recovered intact on the Spaceport property.

"This vehicle was the same one that flew on December 4th, 2011, and successfully demonstrated the feasibility of a reusable rocket," said Neil Milburn, Vice President of Program Management for Armadillo Aerospace. "The altitude achieved in this second flight was approximately twice that of the earlier flight and again tested many of the core technologies needed for the proposed manned reusable suborbital vehicle."

The images captured by the rocket-mounted camera at apogee also serve to indicate the spectacular views of the Rio Grande valley that await future private astronauts.

The next incremental step for Armadillo Aerospace will be a 100-km (~62 miles) -plus "space shot" with the successor vehicle STIG-B, which is provisionally scheduled to launch in early spring from Spaceport America.

Founded in 2000, Armadillo Aerospace has an unequaled experience base with over 200 flight tests spread over a dozen different vehicles. The company has done work for NASA and the United States Air Force, and flown vehicles at every X-Prize Cup and Northrup Grumman Lunar Lander Challenge event, including those held in New Mexico from 2006 to 2008.

Space Adventures, the company that organized the flights for the world's first private space explorers, is headquartered in Vienna, VA, with an office in Moscow. It offers a variety of programs such as the availability today for spaceflight missions to the International Space Station and around the moon, Zero-Gravity flights, cosmonaut training, spaceflight qualification programs and reservations on future suborbital spacecraft.

Spaceport America has been providing commercial launch services since 2006. Phase One of the construction for the spaceport is expected to be complete in early 2012. Phase Two of the construction and pre-operations activities will follow, including the development of a world-class Visitor Experience for students, tourists and space launch customers. Officials at Spaceport America have been working closely with entrepreneurial space leaders like Armadillo Aerospace, Virgin Galactic, and UP Aerospace, as well as established aerospace firms like Lockheed Martin, Boeing, and MOOG-FTS to develop commercial spaceflight at the new facility. The economic impact of launches, tourism and new construction at Spaceport America are already delivering on the promise of economic development to the people of New Mexico.