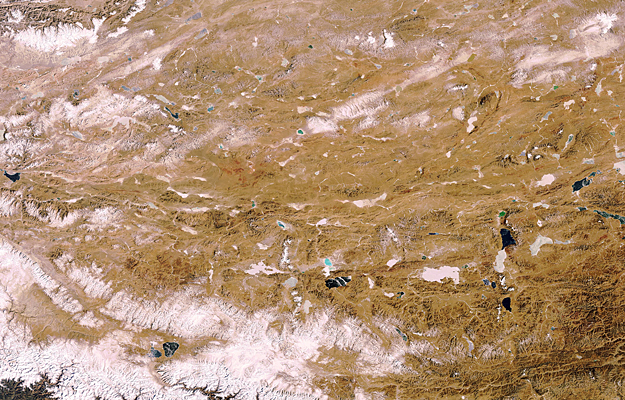 Frozen lakes dotting the Tibetan Plateau in Central Asia are pictured in this image from ESA's Envisat satellite. Tibet is the highest and largest plateau in the world, with an area equal to about four times the size of France, and an average elevation exceeding 4500 m.

To its south it is boarded by the Himalayan mountain rage - part of which is visible in the lower-left corner of the image. To the northwest, we can see part of the Kunlun mountains, separating the plateau from the Tarim Basin.

Both salt- and freshwater lakes are visible across the steppe - many of which freeze for many months of the year.

The plateau becomes progressively higher, colder and drier as is slopes northwest. The Chanthang region in the northwest has an altitude of over 5000 m, and winter temperatures reach -40oC, making this inhospitable environment one of the least populous regions in the world. The plateau is also the world's third largest store of ice, after the Arctic and Antarctic. In recent years, rising temperatures have caused fast-paced melting.

The glacial melt pours into the continent's largest rivers, such as the Indus and the Ganges. This makes the ice store a vital lifeline for Asian rivers, but while rapid melting causes lakes to expand and floods rivers, it depletes the water source in the long term.

Satellites such as CryoSat, SMOS and Envisat can be used to monitor glacial melting and the water cycle, as well as the effects that climate change has on our planet. This image was captured on 30 January by the MERIS instrument on the Envisat satellite.