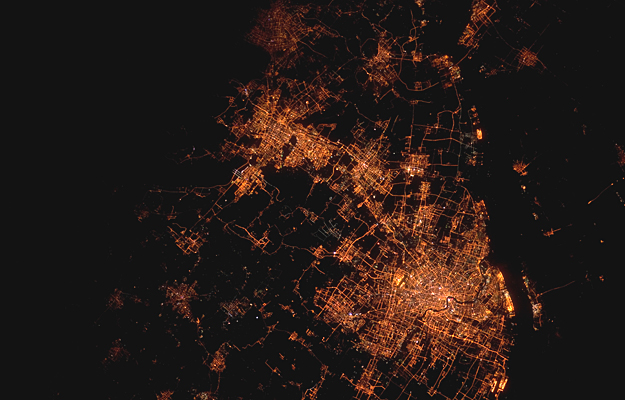 A nighttime view of Shanghai is featured in this image photographed by an Expedition 30 crew member on the International Space Station. The city of Shanghai sits along the delta banks of the Yangtze River along the eastern coast of China. The city proper is the world's most populous city (the 2010 census counts 23 million people, including "unregistered" residents).

With that many humans, the city is a tremendous sight at night. Shanghai is a key financial capital for China and the Asian Pacific region. The bright lights of the city center and the distinctive new skyscrapers that form the skyline along the Pudong district (the eastern shore of the Huangpu River, a tributary of the Yangtze that cuts through the center of Shanghai) make for spectacular night viewing both on the ground and from space.

The official census count in 2000 was 16.4 million; the city population has increased more than 35 per cent since that time. Much of the growth has occurred in new satellite developments like areas to the west of the city (for example, Suzhou). The city's rapid growth and development during the 20th and 21st centuries have come at a cost. Water availability is a key concern, and groundwater withdrawal has resulted in substantial subsidence in and around the city.