Map of Cassini's Orbits Around Saturn 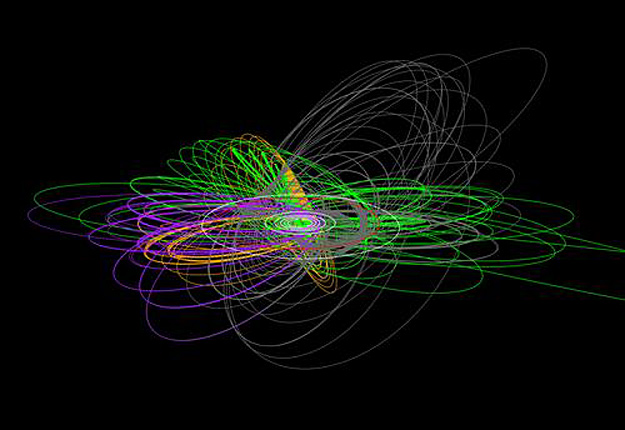 NASA's Cassini spacecraft has been on an epic road trip, as this graphic of its orbits around the Saturn system shows. This picture traces Cassini's orbits from Saturn orbit insertion, on June 30, 2004 PDT, through the planned end of the mission, on Sept. 15, 2017. Saturn is in the center, with the orbit of its largest moon Titan in red and the orbits of its six other inner satellites in white.

Cassini's prime mission, completed in 2008, is shown in green. Its first mission extension, which was known as the Equinox Mission and ended in 2010, is shown in orange. The completed orbits of its second mission extension, known as the Solstice Mission, are shown in purple. Orbits after Cassini's 15th anniversary of launch, on Oct. 15, 2012, appear in dark gray. These include orbits that pass inside Saturn's innermost ring, which start in April 2017. Credit: NASA/JPL-Caltech