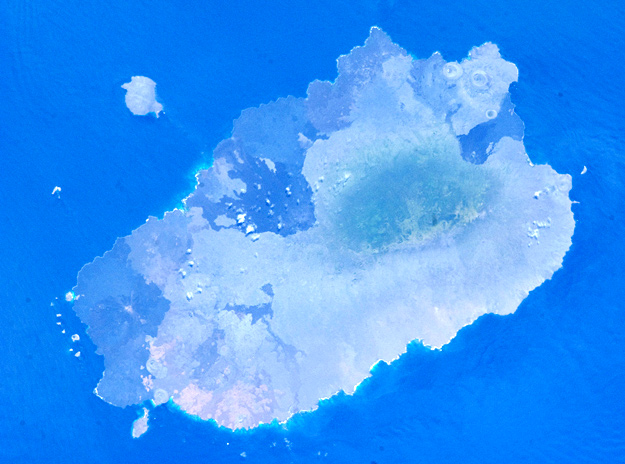 Isla Santiago is featured in this image photographed by an Expedition 33 crew member on the International Space Station. The island of Santiago is located near the center of the Galapagos Islands off the coast of Ecuador. The Galapagos Islands are situated near the equator, and were formed from volcanism related to a large mantle plume (also known as a hot spot). This hot spot is very close to the tectonic boundary between the Galapagos Ridge, a plate boundary that is also an oceanic spreading center, and the Nazca and Cocos plates.

This combination of mantle plumes and tectonic plate movements produces a unique geological environment, including underwater ridges of volcanoes that influence the water circulation around the Galapagos. All of these aspects contribute to the geology and biology of the Galapagos. Isla Santiago itself is formed from a shield volcano also called Santiago. This type of volcanic structure is recognized by low, flat summits surrounded by extensive flow fields of lava; the lava is not very viscous, so it can flow for great distances from the source vents. Several dark lava flow fields are visible in this photograph, the largest along the eastern, western, and southern coastlines. The small Isla Rabida to the south of Isla Santiago is the peak of another, mostly submerged shield volcano.

In addition to the lava flows, other volcanic features known as tuff cones are visible on the eastern and western sides of the island. These cones are formed from the rapid interaction of hot flowing lava and water. The water underneath the lava flow flashes to steam explosively, and this both fragments the lava and rapidly cools it, leading to the formation of cones of glassy, relatively fine-grained volcanic material. The most recent volcanic activity on Isla Santiago occurred during 1904 -- 1906. The summit ridge of the Santiago shield volcano is located in the northwestern part of the island (center). Also at center is a large but isolated region of green vegetation primarily located on the south-facing slope below the summit ridge.

This image was taken during the dry, or garua, season that lasts from June to November. The season is dominated by cooler air transported by the Southeast Trade winds and cooler waters from the Humboldt and Cromwell currents. The combination of cool air and water results in rain falling only in the island highlands, with south- and east-facing slopes receiving the most precipitation. Despite the favorable topographic location, the yellow green color of the vegetation may indicate water (or other) stress.