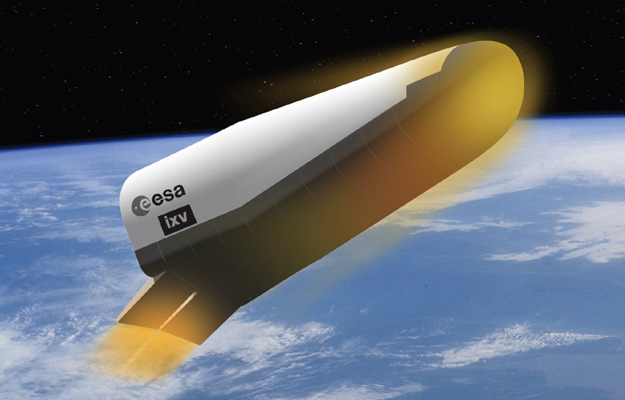 Europe's IXV Intermediate eXperimental Vehicle is completing a series of descent and landing tests, including a full-scale splashdown planned for early next year, allowing the mission to move ahead towards launch in 2014.

The ambition for a spacecraft to return autonomously from low orbit is a cornerstone for a wide range of space applications, including space transportation, exploration and robotic servicing of space infrastructure. IXV will achieve this goal. More manoeuvrable and able to make precise landings, it is the 'intermediate' element of Europe's path to future developments with limited risks. Launched into a suborbital trajectory on ESA's small Vega rocket from Europe's Spaceport in French Guiana, the vehicle will return to Earth as though from a low-orbit mission.

For the first time, it will test and qualify European critical reentry technologies in hypersonic flight, a requirement for all future applications that include a return from orbit. The experimental nature of the mission means that the vehicle's trajectory is designed to avoid inhabited regions - it will fly the experimental hypersonic phase over the Pacific Ocean, descend by parachute and land in the ocean to await recovery and analysis. The descent and landing are key because they will allow the recovery of the vehicle and its precious recorded data for inspection, and serve as a backup in the event of a telemetry failure with ground stations. Multiple failures during these phases in past national and international test flights have prompted ESA to ensure the recovery of the vehicle and data by using a robust design and rigorous verification.

Specific tests at system and subsystems level have been added to the standard qualification approach, including splashdown attitude verification tests in Rome, Italy, at the INSEAN research institute, a parachute subsystem qualification test at the US Yuma Proving Ground, and a descent and landing system test in Sardinia, Italy, at Poligono Interforze Salto di Quirra (PISQ).

Attitude verification tests during splashdown were concluded in September 2011 with a prototype. They verified several vehicle splashdown scenarios at different angles, ranging from -35* to +71*, and wind conditions, in longitudinal and lateral directions. This has revealed the ideal water impact angle to minimise loads and preserve the vehicle's structure to be +35*.

The parachute qualification test was completed in June 2012, verifying the behaviour of the complex subsystem, including its multiple stages. A second prototype integrating the subsystem was dropped from a plane at an altitude of 5.7 km and landed safely in the Arizona desert.

A third full-scale prototype is undergoing integration at Italy's CIRA research centre, including flight hardware and software. It will be dropped from a helicopter at an altitude of 3 km, splashing down in the Mediterranean Sea in the PISQ test range off the coast of Sardinia.

In parallel, industry is moving ahead with building and qualifying all flight elements, including the vehicle and the ground support equipment, and ground elements such as the mission control centre and tracking stations.

"In addition to the retrieval of flight data in real time via telemetry, securing the descent and landing phases of the IXV mission for the recovery of the vehicle intact is the requirement of utmost importance for the project," says Giorgio Tumino, IXV Project Manager.

"Following past national and international experimentation failures, a lot of pressure is on industry to strengthen the failure tolerance in the design and verification approach of such critical flight phases."

"The IXV mission into space is now becoming a concrete reality. It will provide Europe with credible and unique knowhow on atmospheric reentry system aspects and unknowns and flight-proven technologies essential to support the realisation of the Agency's future ambitions in the field."