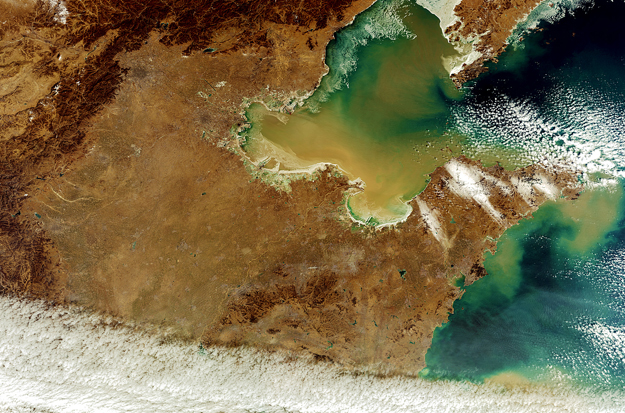 Northern China is pictured is this week's image from the Envisat satellite. The North China Plain dominates the image, bordered on the north and west by mountains, with the Yellow Sea to the east.

It is one of the most densely populated regions in the world. Millet, corn and cotton are grown here, along with wheat, sesame seed and peanuts. Flowing northeast across the Plain we can see the Yellow River - China's second longest - before it empties into the Bohai Sea, the innermost gulf of the Yellow Sea. At its delta is the Shengli Oilfield, which has a daily production of about 650 000 barrels. Multiple rivers flow into the Bohai Sea, carrying sand and silt into the water, as evident in this image. These deposits, together with sandstorms, are responsible for the Yellow Sea's colour and name.

The waters are rich in blue-green algae that also contribute to the colour. This along with an abundance of seaweed and shellfish indicate high sea productivity, accounting for the large fish production. Around 200 fish species are exploited commercially.

In the upper left portion of the image near the mountains, China's capital Beijing looks like a shaded circle. Southeast of Beijing along the coast is Tianjin Municipality, a commercial port. The main source of water supply for Tianjin is the Yuqiao Reservoir, located to the north near the mountains.

This image was acquired by Envisat's MERIS instrument on 8 February.