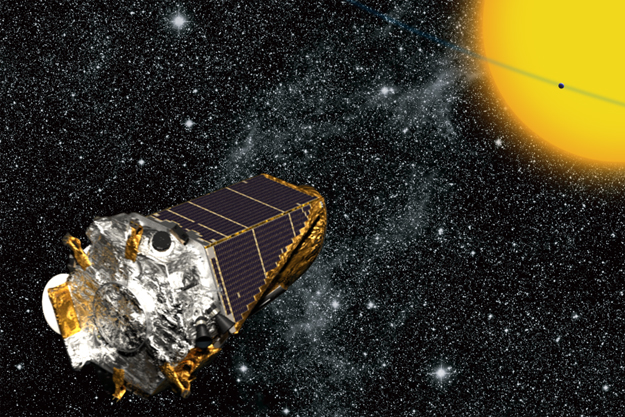 It has been more than three-and-a-half-years since the Kepler mission launched in March 2009. The spacecraft has continued in its heliocentric, drift-away orbit and is now more than 45 million miles away from Earth.

The Kepler project team has completed two science data downloads since the last update. The most recent data download on Jan. 11, 2013 included a quarterly roll to winter attitude. This marked the successful completion of Quarter 15 flight operations and the beginning of Quarter 16.

Earlier this month during a semi-weekly contact with the spacecraft, the team detected an increase in the amount of torque required to spin one of the three remaining reaction wheels. This increase in friction occurred before the Jan. 11, 2013 quarterly roll, and persisted after the spacecraft roll and several momentum desaturations of the reaction wheels. Increased friction over a prolonged period can lead to accumulated wear on the reaction wheel, and possible wheel failure. To minimize wheel friction, the team implemented several mitigations including increased operating temperatures, higher spin rates, and bi-directional operation following the failure of reaction wheel #2 in July 2012.

Given the persistence of this recent event in reaction wheel #4, the project team will place the Kepler spacecraft in a "wheel rest" safe mode for a period of ten days beginning today. Science data collection will be stopped during this period and the spacecraft solar panel orientation will be aligned with the sun to maintain positive power for Kepler. This is similar to a normal safe mode configuration, but with thrusters maintaining attitude instead of reaction wheels. Resting the wheels provides an opportunity to redistribute internal lubricant, potentially returning the friction to normal levels.

Once the 10-day rest period ends, the team will recover the spacecraft from this resting safe mode and return to science operations. That is expected to take approximately three days. An update will be posted after the wheel rest operation is complete.

The Kepler team's efforts and the results of the data were prominently featured at the 221st American Astronomical Society (AAS) meeting held Jan. 6-10, 2013 in Long Beach, Calif. In total, 33 talks and 26 posters using Kepler data were presented, and distributed over 23 different scientific sessions. This is a testament to the diversity within the Kepler community. Five special Kepler sessions were spread over three days of the meeting. These special sessions were: 1.) Zeroing in on eta-Earth with NASA's Kepler Mission, 2). Planets and Planetary Systems Identified by Kepler, 3.) Astrophysics with Kepler's High Precision Photometry I, 4.) Astrophysics with Kepler's High Precision Photometry II, and 5.) Kepler Exoplanets.

During AAS, results using Kepler data were presented from the scientific community:

* New analysis (Fressin et al, 2012) of Kepler data from the Harvard-Smithsonian Center for Astrophysics shows that one in six stars have an Earth-sized planet in an orbit closer than Mercury. The study concludes that since the Milky Way has about 100 billion stars, there are at least 17 billion Earth-sized worlds out there and that at least 70 percent of stars host at least one planet of any size. It is the planet-less star that is rare.

* A new study (Swift et al, 2012) from Caltech provides yet more evidence that planetary systems are the cosmic norm. The team made their estimate while analyzing planets orbiting a star called Kepler-32 -- planets that are representative, they say, of the vast majority of planets in our galaxy and thus serve as a perfect case study for understanding how most of these worlds form.

While at AAS, the Kepler project hosted a "NASA Kepler Mission Town Hall" which presented the extended mission plans. Subjects discussed at the town hall included significant changes in the data release policy, availability of new project products, avenues for community involvement via the Kepler Participating Scientist Program and Guest Observer program, as well as the role of the Barbara A. Mikulski Archive for Space Telescopes (MAST) and the NASA Exoplanet Archive.

Also announced last week, William Borucki, science principal investigator for NASA's Kepler mission at NASA's Ames Research Center at Moffett Field in California, was awarded the prestigious 2013 Henry Draper Medal by the National Academy of Sciences. Borucki is honored for his founding concept and visionary leadership during the development of Kepler, which uses transit photometry to determine the frequency and kinds of planets around other stars.

The team applauds Bill's vision and determination for it has delivered one of NASA's most exciting and prolific missions ever flown.