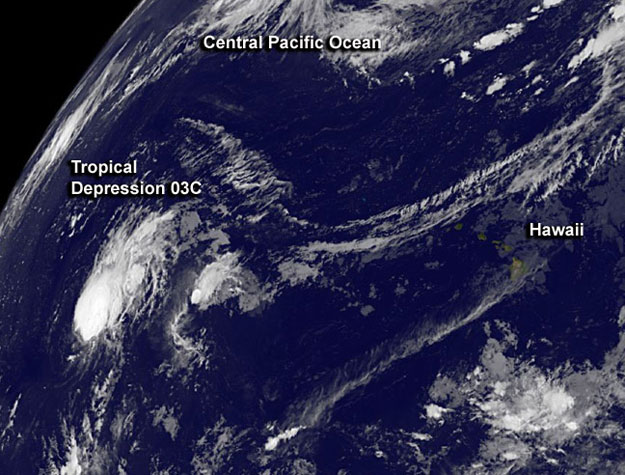 The Central Pacific Ocean has generated a third tropical depression this year and NOAA's GOES-West satellite captured an image of Tropical Depression 03C far to the west of Hawaii.

The depression was centered near 19.5 north latitude and 179.5 west longitude. Maximum sustained winds are near 35 mph/55 kph. Tropical Depression 03C (TD03C) is moving to the west-northwest at 16 mpg/26 kph and the Central Pacific Hurricane Center expects it to continue moving in that direction for the next couple of days. There are no warnings or watches associated with the depression.

Like the previous two tropical cyclones born in the Central Pacific, this one is moving west and is expected to cross the International Dateline. That means that NOAA's Central Pacific Hurricane Center will not be issuing updates on the system as it will fall under the forecast authority of the Joint Typhoon Warning Center.

TD03C is expected to continue tracking west-northwest, it is being steered by a mid-to-upper level ridge (elongated area) of high pressure to the north of the system. No change in strength is expected in the next day.