From Birth to Death in Four Days: Kiko Now a Remnant Low 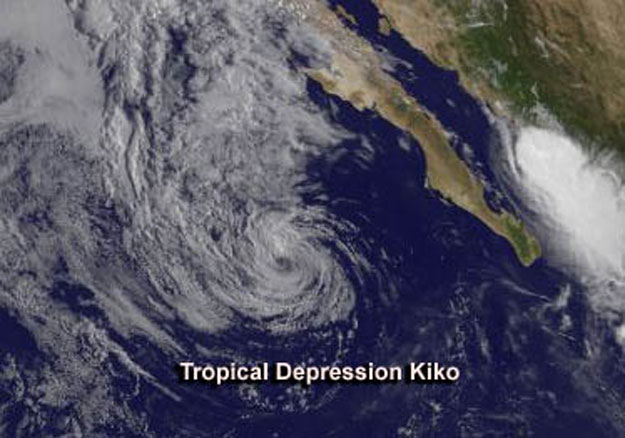 A lot of things happen over a holiday weekend, and while people in the United States were celebrating Labor Day weekend, the Eastern Pacific Ocean's Tropical Storm Kiko came and went. Satellite data captured Tropical Storm Kiko's birth on Sept. 1 and saw its remnants weakening on Sept. 3. As Kiko dissipates, another low pressure system is forming near the southwestern coast of Mexico.

NOAA's GOES-West satellite captured the life of Kiko from the time it became Tropical Depression 11 on Aug. 31. The depression formed about 500 miles/805 km west-southwest of the southern tip of Baja California and appeared elongated.

The next day, a GOES-West satellite image revealed that the depression organized and Tropical Storm Kiko was born at 11 a.m. EDT. Kiko intensified quickly as it continued moving north at 7 mph/11 kph and its maximum sustained winds sped up to near 70 mph, just 4 mph shy of hurricane-force. At that time, te center of Tropical Storm Kiko was located near latitude 21.3 north and longitude 115.6 west, 380 miles west-southwest of the southern tip of Baja California.

By 11 a.m. EDT on Sept. 2, Kiko had run into cooler waters and wind shear, weakening the storm. Tropical Depression Kiko's maximum sustained winds had dropped to near 35 mph/55 kph. It was centered near latitude 22.9 north and longitude 116.4, about 415 miles/665 km west of the southern tip of Baja California, Mexico. Kiko was moving toward the northwest near 2 mph/4 kph.

On Tuesday, Sept. 3, Kiko was a post-tropical remnant low pressure area near 23 north and 116.5 west. The National Hurricane Center noted that Kiko's remnants will continue to weaken, and the short-lived storm will dissipate by Sept. 4.

As Kiko dissipates, another low pressure area appears to be organizing in the Eastern Pacific.The other low is located a couple of hundred miles southwest of Mexico's southwestern coast. It is generating widespread showers and is expected to develop over the next several days. The National Hurricane Center gives that low a 50 percent chance of becoming a tropical depression in the next several days as it moves to the west-northwest. Because of its close proximity to land, southwestern Mexico may experience heavy rainfall and gusty winds from the system over the next couple of days.