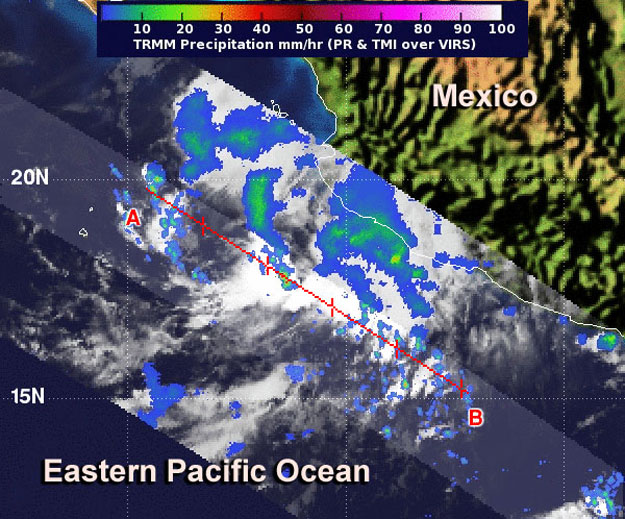 Tropical Depression 12E formed off the southwestern coast of Mexico at 5 a.m. EDT on Sept. 5. Just 40 minutes before, NASA's TRMM satellite passed overhead and saw some "hot towers" around the center, indicating that the low pressure area that was previously known as System 99E would strengthen.

A "hot tower" is a tall cumulonimbus cloud that reaches at least to the top of the troposphere, the lowest layer of the atmosphere. It extends approximately nine miles (14.5 km) high in the tropics. The hot towers in Tropical Depression 12E were reaching heights of 15 km/9.3 miles high around the depression's center. These towers are called "hot" because they rise to such altitude due to the large amount of latent heat. Water vapor releases this latent heat as it condenses into liquid. NASA research shows that a tropical cyclone with a hot tower in its eye wall was twice as likely to intensify within six or more hours, than a cyclone that lacked a hot tower. Those hot towers also drop heavy rainfall.

At 5 a.m. EDT/0900 UTC, Tropical Depression 12E had maximum sustained winds near 35 mph/55 kph. The National Hurricane Center expects the depression to strengthen further into a tropical storm later on Sept. 5. The center of 12E was located near latitude 17.6 north and longitude 106.1 west, about 155 miles/245 km southwest of Manzanillo, Mexico. The depression is moving toward the northwest near 6 mph/9 kph is expected to continue in that direction over the next couple of days.