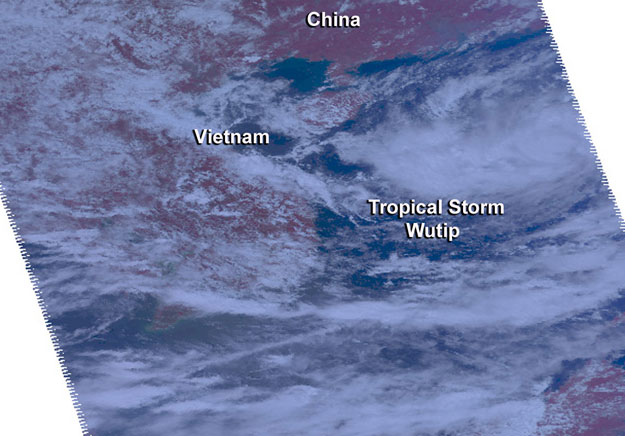 Tropical Storm Wutip formed in the Northwestern Pacific Ocean today after being born on yesterday, Sept. 26 as Tropical Depression 20W. NASA's Aqua satellite passed over the tropical cyclone as it was intensifying and saw banding of thunderstorms circling the storm.

When NASA's Aqua satellite passed over Wutip in the South China Sea on Sept. 26 at 17:35 UTC/1:35 p.m. EDT, it was still tropical depression 20W. Infrared data from the Atmospheric Infrared Sounder or AIRS instrument that flies aboard Aqua showed bands of thunderstorms were surrounding the center of circulation, mostly to the southeast of the center. AIRS infrared satellite data showed fragmented bands of thunderstorms shifted to the northern side of the storm on Sept. 27 at 0605 UTC/2:05 a.m. EDT.

The Joint Typhoon Warning Center or JTWC noted that warm waters in the South China Sea and low wind shear will allow Tropical Storm Wutip to intensify steadily over the next couple of days. JTWC expects Wutip to strengthen to up to 70 knots/80.5 mph/129.6 kph by Sept. 29 before crossing the Gulf of Tonkin.

Wutip is expected to zigzag in a westerly direction over the next couple of days when it is expected to make landfall in central Vietnam early next week around Sept. 30.