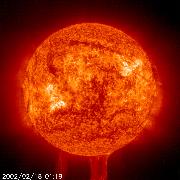 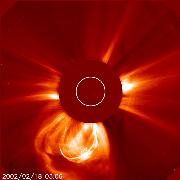 SOHO observed a huge eruptive prominence arching out from the Sun on Feb. 18, 2001. The first image captured it in extreme ultraviolet light (EIT 304Ĺ) when part of it had already stretched beyond the instrument's field of view. Here it probably extends more than 50 times the size of Earth. In the second (LASCO C2) image the expanding arch can be seen still largely intact just two hours later as the brightest part of a coronal mass ejection. The solar storm carries billions of tons of particles at millions of kilometers per hour.