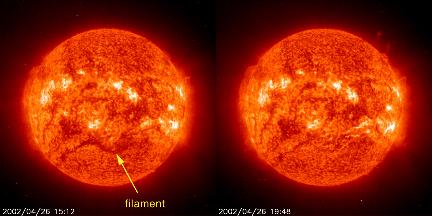 The two stills and an animation taken in extreme ultraviolet light on 2002 April 27 show the eruption of a long filament above the Sun's surface. Filaments are twisting masses of cooler ("only" 10,000 - 100,000 degrees Kelvin) gas contained by magnetic fields above the Sun's surface in the midst of the much hotter (~ 1,500,000 K) corona. (Filaments are called prominences if observed on the Sun's limb or edge.) In a matter of six hours the filament explodes and virtually disappears, much of it blown out into space. With its EIT telescope taking images every 12 minutes, SOHO was able to clearly capture a the eruption of a filament over 700,000 km long.

The event was associated with a strong coronal mass ejection that was seen a few hours later in this LASCO C2 image as a large expanding cloud of particles.