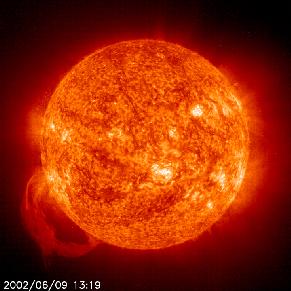 A long, arching, solar prominence in extreme ultraviolet light (ionized helium at 304Ĺ) is seen erupting from the Sun on 9 June 2002. This is certainly one of the largest prominences ever observed by SOHO. Prominences are huge clouds of relatively cool, dense plasma suspended in the Sun's hot, tenuous corona. Magnetic fields built up enormous forces that propelled particles out beyond the Sun's surface. Emission in this spectral line shows the upper chromosphere at a temperature of about 60,000 degrees K. For a sense of scale, the prominence extends over approximately 50 Earths from end to end. A fleeting phenomenon, it had disappeared by the time the next image in this wavelength was taken about 6 hours later.